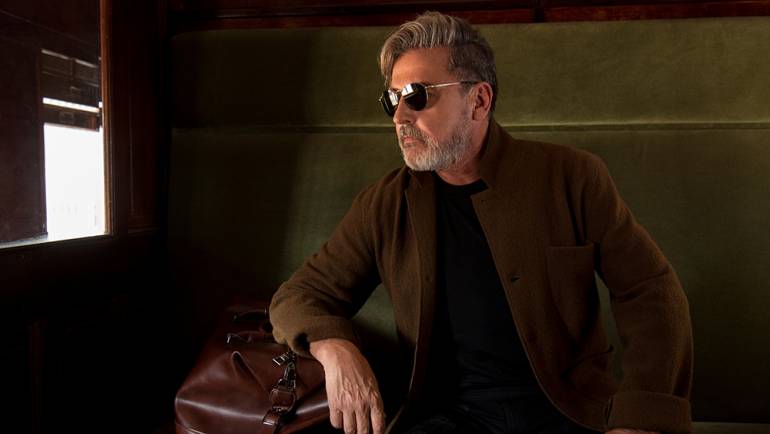 Ricardo Montaner is one of the best-selling Latin singer/songwriters of all time. A versatile musician and preeminent romantic balladeer, Montaner has composed and edited over 300 hundred songs, released over 24 studio albums, sold over 65 million records worldwide, broken attendance records at arenas all over the globe, and boasts one of the most recognizable voices in the Spanish-speaking world. He was born in Argentina but moved to Venezuela as a small child, where he first got his start singing in a church music group. From there, music became his driving passion, a calling that has taken him to a level of artistic renown few can match.

Over the course of his illustrious career, Montaner has sent numerous singles to the top of the charts, including perennial favorites like “Me Va a Extrañar,” “Dejame Llorar,” “La Gloria de Dios,” “La Cima Del Cielo,” “Castillo Azul,” “Quisiera,” “Vasito de Agua” and many more. His song “Tan Enamorados” occupied the No.1 spot of Billboard’s Hot Latin Songs chart for 47 weeks. In October 2011, the magazine cited him as one of the ten most outstanding Latin American artists in the last 25 years. Montaner continues to evolve as an artist, innovating with new styles and collaborating with contemporary hitmakers like Tainy, Farruko, and J Balvin. Along the way, Montaner’s picked up several prestigious accolades, including a Latin GRAMMY Lifetime Achievement Award in 2016.

Beyond his music, Montaner has always put an emphasis on giving back. A tireless advocate for children, Montaner’s philanthropic efforts have earned him Billboard’s Hope Award, a Global Ambassadorship for the Special Olympics, and the soon to be announced title of Ambassador for Peace on behalf of Peace Tech Lab, an international award-winning organization established by the United States Institute of Peace, dedicated to raising awareness about the need to use technology for social good.

As part of Hispanic Heritage Month, BMI caught up with this celebrated music creator to learn how he’s made it all work.

Since first starting your career in the 1980s, you’ve become one of the best-selling Latin artists of all time. How has your creative process evolved over the years?

I feel that the creative process mutates from the personal growth of the individual. We cannot forget that those of us who write develop stories based on our experiences. Therefore, I believe that it is a matter of evolution and with each year that passes, creativity gives you new elements with which to write a song.

After 24 albums, you’ve managed to stay current — what has been your secret?

There is no secret formula for staying relevant. I try to adapt to what is musically current without losing the legitimacy of my poetry. But, at the same time, those same life experiences that I spoke about earlier have a lot to do with keeping you aware of what’s happening — how things feel, how couples live, what they live for, how their relationships change according to what’s happening in the world.

Along with writing most of your own songs, you’ve collaborated with some incredible songwriters. What, in your experience, is the key to a successful collaboration?

I think a successful collaboration happens when you shake your egos off on the doormat. When you get the opportunity to write with someone, the secret for something wonderful to result from it is to check your ego at the door. You pick it back up when you leave the place. That’s the best way I can answer that question.

You have won countless accolades, including the Lifetime Achievement award at the Latin GRAMMY Awards in 2016. What accomplishment in your career are you most proud of?

I am most proud of the respect… of my fans, my colleagues, whom I respect with all my heart and conscience. There is no more beautiful prize for any human being than the respect of others.

You have managed to use your fame as a music creator as a powerful platform for your philanthropy via your two foundations, Hijos Del Sol and Ventana de Los Cielos, endeavors that earned you Billboard’s Spirit of Hope Award in 2010. How important to you is the concept of giving back?

We were designed to serve. When God brought us into the world, He brought us with the idea of ​​living in brotherhood and serving one another. In my family, we take this very seriously and, in many cases, it translates through our foundations. But it also translates into the personal satisfaction that comes from knowing that you have brought a smile to someone or that you have brought relief to someone. For me, philanthropy is like an immense title, but service is a title that I regard with greater pride and satisfaction.

Speak a little bit about your involvement with Peace Tech Lab? How did you get involved with that?

Peace Tech Lab is a non-profit organization whose mission is the construction of peace. Throughout my experience as a spokesperson and ambassador of different organizations such as UNICEF, the Pan American Health Organization (PAHO), and the Special Olympics, to name a few, one of my greatest satisfactions has been knowing that any advocacy work that one does echoes and manifests itself with an impact. Peace Tech Lab seeks that: to impact people’s lives around the world. I am very proud and happy to know there are results every time we run a campaign.

What does Hispanic Heritage Month mean to you?

I think Hispanic Heritage is nothing more than a reminder celebration of where we come from, of our dignified presence, and our achievements in this country.