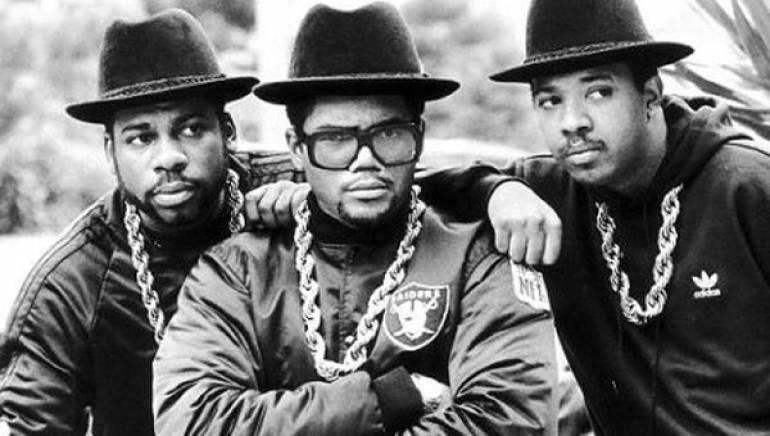 By 1987, the year Run-D.M.C. released the single “Christmas in Hollis” on two different holiday compilations, they were undeniably superstars—with gold records, multi-million dollar endorsements, and even a Live Aid appearance to their credit. But rap—the music they performed, championed and for many, represented—and hip-hop—the frenetic, kinetic culture comprising rap, break dancing and graffiti that had exploded out of New York City over the past decade and was rapidly spreading—still seemed to peer in from the edges onto a popular culture that regarded it with suspicion, condescension or outright dismissal. To mainstream America, Run-D.M.C. were the iconic musical representatives of an unfathomable youth culture that many perceived as dangerous and disconcerting. You know, like Elvis.

As brilliantly chronicled in Will Hermes’ recent book Love Goes to Buildings on Fire, the period spanning 1973 to 1977 in New York City was a time of extraordinary musical innovation that would go on to have profound impacts on music and culture. From the rise of punk on the city’s Lower East Side with the Ramones, the New York Dolls, Television and Patti Smith, to the fearless dissonance of the avant-garde jazz of Don Cherry and minimalist composer Phillip Glass, to the blistering salsa rhythms of Latin music pioneers Willie Colon and the Fania All Stars, New York’s musicians found limitless possibilities in the harsh daily realities of life in a city whose very future was in question.

But as unforgiving and lawless as areas of New York were at the time, the South Bronx was unquestionably the roughest. A blighted and brutal landscape of hopelessness, the Bronx had lost more than 600,000 manufacturing jobs, 750,000 residents, and 43,000 housing units—just in the past few decades. Gangs had sliced the neighborhoods block by block and owners of abandoned or condemned buildings often burned them for the insurance money. The children of the neighborhood had to navigate an area that looked and felt like a war zone. Just one out of four would graduate high school.

All the more astounding, then, that these seemingly futureless and forgotten kids would singlehandedly create a musical language that would quickly become a global phenomenon, dramatically changing the way music was created, performed, heard and even defined. In one of the most profound and unlikely artistic triumphs of the 20th century, they took everything that had been stacked against them and changed the world, using nothing more than their voices and a beat.

Rap was still being forged in public parks and house parties by innovators like DJ Kool Herc, Afrika Bambaataa and Grandmaster Flash when it began to spread through the city. It reached Joseph “Run” Simmons and Darryl “D.M.C.” McDaniels when they were still teenagers living in the working-class African American neighborhood Hollis, in the borough of Queens. Simmons had been DJ’ing for Kurtis Blow when he met McDaniels and began writing rhymes with him. They were soon joined by DJ Jason “Jam-Master Jay” Mizell and Run-D.M.C. was born.

In 1983, Run-D.M.C. released their first single, “It’s Like That/Sucker M.C.’s,” which reached No. 15 on the r&b charts. With a tough sound and an even tougher look—their jeans, black hats and white Adidas with no laces were a profound contrast to the glam look of rap’s pioneers, who drew inspiration from bands like Funkadelic and Kool and the Gang—the band managed to stay entirely authentic to themselves and their music, while simultaneously carrying it to the mainstream. With the release of their 1985 album King of Rock, and its hit single title track, and the smash follow-up Raising Hell, with its incredible reworking of Aerosmith’s “Walk This Way”—Run-D.M.C. merged hard rock with rap in a way that was both familiar and incredibly new.

In addition to their musical innovations, Run-D.M.C. understood the power of video. They brilliantly used humor and narrative to promote themselves, as well as offer striking visual contrasts to the War on Drugs marketing campaign, then at its zenith with the mid-80s crack epidemic, which was filling television airwaves with images of black America that were disturbing and one-sided.

In that context, what could be more strangely and hysterically subversive than a Christmas song and its unapologetically dopey accompanying video? Driven by the thumping horn hook of Clarence Carter, and featuring samples from “Joy to the World” and “Frosty the Snowman,” “Christmas in Hollis” is funny, funky and as wholesome as “Jingle Bells.”  (“It’s Christmas time in Hollis Queens,” D.M.C. raps. “Mom’s cooking chicken and collard greens / Rice and stuffing, macaroni and cheese / And Santa put gifts under Christmas trees.”) But with its pounding beat, scratching vinyl and commanding vocal delivery, it is unmistakably a Run-D.M.C. song. “Christmas in Hollis” is the sound of hip-hop hitting the mainstream—because, really, what could be more mainstream than a Christmas song?—and altering it forever, while still staying true to the streets and neighborhoods it came from.