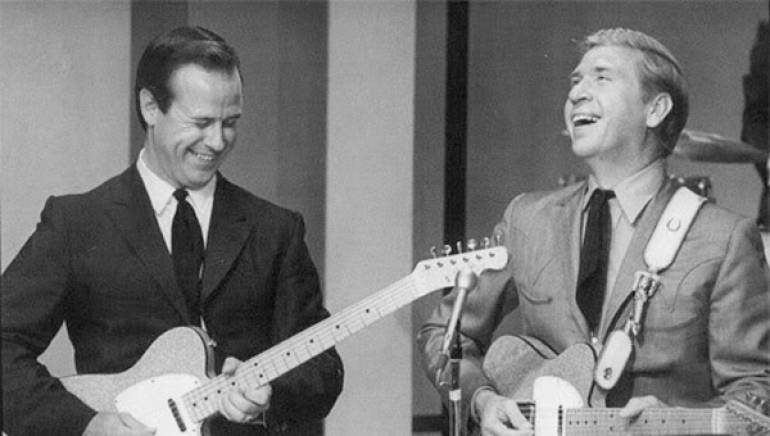 Buck Owens was a young truck driver the first time he passed through Bakersfield—a flat, hardscrabble stretch of central California whose musical identity he’d soon shape. Inspired by the heartfelt honky-tonk of Wynn Stewart and the double Texas fiddles of Bob Wills, Owens developed a type of country music that was as far from Nashville musically as it was geographically.

As the country establishment embraced the lush, full-orchestration of Owen Bradley and later Billy Sherrill, Owens was drawing from rock and roll, rockabilly and even Mariachi, marrying it to his extraordinary ability to turn a phrase, and honing it to a razor sharpness in front of hard-drinking audiences of oilfield workers in bars like the Blackboard and the Luck Spot. The Bakersfield sound was as tough and sparse as the town that gave it its name, and Owens’ cantankerous counterpoint to slick country music still reverberates through alt-country, roots rock and even punk.

As a singer, writer and guitarist, Owens was a formidable talent, but by his own estimation he wouldn’t have gotten far without the great Don Rich—his best friend, frequent co-writer and lead guitar player. Owens and Rich developed intensely tight vocal harmonies and paralleled them with a two-guitar attack that helped drive the stinging, chiming tone of the Fender Telecaster—the first mass-produced electric guitar, with a sound as stripped down as the music that Owens and Rich wrote—into the heart and soul of country music.

In 1963, Buck Owens and the Buckaroos’ first No. 1 hit “Act Naturally” triggered a run of chart-topping hits that lasted most of the decade, eventually totaling a stunning 21. Together, Owens and Rich penned multiple No.1s, including 1965’s “Before You Go,” the following year’s “Waitin’ In Your Welfare Line” and many others. Their work influenced an incredibly diverse range of artists, from the Beatles, who recorded “Act Naturally,” to Ray Charles, who had pop hits with “Crying Time” and “Together Again,” and of course, Merle Haggard.

The band was en route to earning their eighth No. 1 when they released Christmas with Buck Owens in 1965. Written by Owens and Rich, “Santa Looked A Lot Like Daddy” is the album’s standout, and has been covered by Garth Brooks, Brad Paisley, Reverend Horton Heat and more.  A send-up and celebration that flies by in just over two minutes, “Santa Looked A Lot Like Daddy” is a classic showcase of the Buckaroos sound, driven by Rich’s spiked guitar licks and Owens’ winking delivery.

In 1974, Rich died tragically in a motorcycle accident. The loss devastated Owens, who didn’t record again until Dwight Yoakam recruited him for the duet “Streets of Bakersfield” in 1988. Owens continued to perform regularly to sell-out crowds at his Crystal Palace in Bakersfield until his death in 2006, but he maintained that it was never the same musically or emotionally without Don Rich.