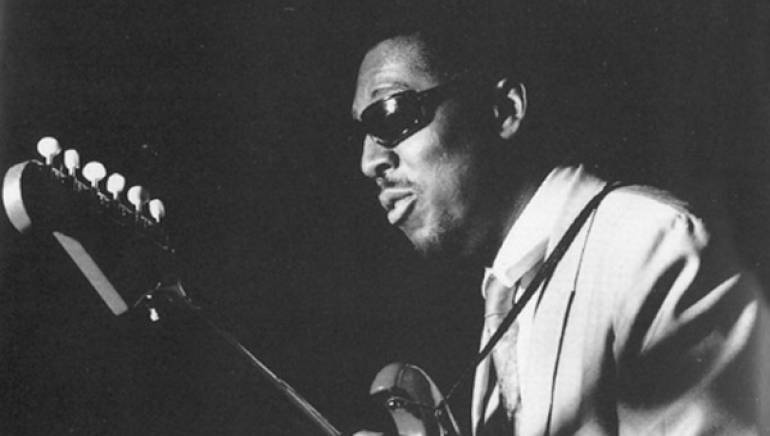 A slice of greasy blues soul that draws from the Willie Dixon classic “Back Door Man,” Clarence Carter’s “Back Door Santa,” co-written with Marcus Daniel for the 1968 compilation Soul Christmas, adds a touch of raunch to the holiday celebrations. “I ain’t like old Saint Nick,” Carter barks over a bleating horn section and chopping funk guitar, “he don’t come but once a year. I come runnin’ with my presents every time you call me dear.”

By 1968, Clarence Carter was no stranger to the cheating oeuvre, having scored a Top 6 pop hit in 1967 with the breathtaking “Slip Away” – two impeccably crafted minutes of Muscle Shoals soul that masterfully balances regret, longing and lust on the rough edge of Carter’s pleading, powerful voice.

Born blind in Alabama in 1936, Carter attended the Alabama School for the Blind and Alabama State College before launching into a music career. He released singles on the Fairlane and Duke labels, but failed to chart. It wasn’t until 1965, when he began to record at FAME Studios in Muscle Shoals that things began to look up.

Established in the late ‘50s by Rick Hall, Billy Sherrill and Tom Stafford, FAME (an acronym for Florence Alabama Music Enterprises) was a divining rod for mid-60s soul perfection, rivaled only by Stax and Motown for the sheer quantity and quality of the music it produced. Wilson Pickett, Aretha Franklin, Joe Tex, Arthur Alexander, Percy Sledge and countless others recorded signature, career-defining songs there, backed by a legendary house band that included Chips Moman, Spooner Oldham, Travis Wammack, Joe South and at times a young Duane Allman.

At FAME, Carter went from the ridiculous (“Making Love at the Dark End of the Street,” a monologue spoken over the James Carr classic that has to be heard to be believed) to the sublime (“Slip Away” and “Too Weak to Fight” which went to No. 13). “Back Door Santa” followed the FAME hits, and preceded Carter’s sentimental “Patches.” From there, Carter’s material took a decidedly adult turn.

“Back Door Santa” might have been racy compared to “Slip Away” and other early Carter hits, but it was positively nothing compared to what was coming. As Carter moved into the ‘70s and early ‘80s, he embraced the kind of bawdy, innuendo-laden, comical, good time roadhouse sex funk that made underground powerhouse performers like Marvin Sease and Bobby Rush gritty and beloved icons. From “Strokin’” to “I Got Caught” to “Dr. C.C.,” it seems like there was no detail of sexy infidelity that Carter couldn’t sing—or, often, speak. They may not have the poignancy or power of “Slip Away,” or the gritty majesty of the Muscle Shoals house band, but this era of Carter’s work was highly influential, and can be strongly heard today in the songs of new Southern soul performers like O.B. Buchana, Sir Charles Jones and Mr. Sam.

But over the course of a long and winding career in music, which continues to this day, Carter is perhaps best remembered for “Back Door Santa.” The song not only stands as a Christmas staple, it also serves as the main hook sample for Run-D.M.C.’s  classic “Christmas in Hollis,” and has been covered and performed by Bon Jovi, Jet and the Black Crowes.