Posted in MusicWorld on January 19, 2021 by Jason Blume 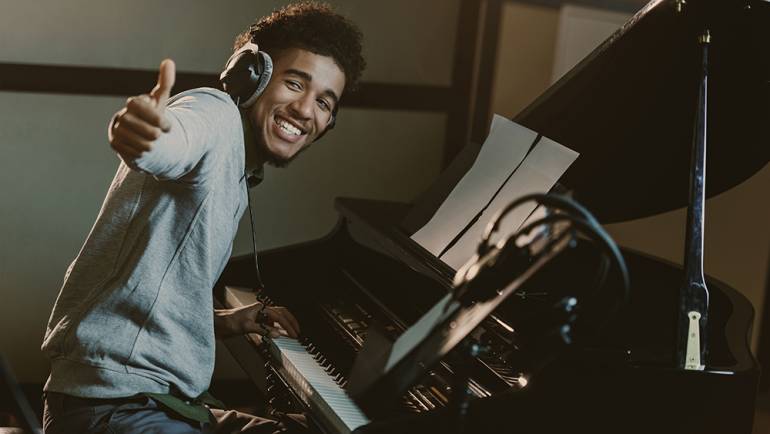 For most of us, 2020 will rank as one of the most tumultuous years of our lifetime. The restrictions, losses, and fears caused by the COVID-19 pandemic, coupled with the emotions stirred up in the political and social arenas, touched virtually everyone—and creative people were hit extra hard. Songwriters, musicians, singers, and other people who create tend to be extra sensitive—and need to be—in order to access and effectively convey the emotions that allow our creations to enter audiences’ hearts. Many of us were impacted, not only emotionally, but also financially as performance venues shuttered.

Some people have thrived creatively in response to challenges. Shakespeare wrote some of his greatest plays, including “Macbeth,” “King Lear,” and “Anthony and Cleopatra,” as well as some of his most beloved sonnets in 1606, while the bubonic plague ravaged England. When the plague returned in 1665, Sir Isaac Newton developed calculus and his theory of gravity while practicing social distancing and isolation.

Similarly, in the time of COVID-19, some songwriters took to online collaborations. Unfettered by geographic locations, they expanded their network to include cowriters from every point on the globe. Many performing artists replaced their tours with live-streamed concerts broadcast from their living rooms or home studios. But for many people, these alternatives were pale substitutes for the chemistry writers felt when in the same room as their collaborators, and the synergy performers can only feel when performing in front of a live audience.

In the wake of such drastic changes, it is understandable that some of us feel drained and need help to rebound and find the way back to our creative grooves.

“Say your thanks. You made it through the tough times. Re-examine your goals. Know that change can be great. Change happens for a reason sometimes. Know you will find a way to make a comeback from the setback.” (Doak Turner, Songwriter and Music Business Professional)

As we heal and adjust to a new normal, let’s look at five ways to reignite our songwriting.

During the first year after I moved to Nashville, I attended writers’ nights, known as “In-the-Rounds”—at the famed Bluebird Café at least three times a week. At these concerts, four songwriters, seated in a circle in the center of the room, took turns playing stripped down versions of hits they had penned, as well as their favorite as-yet unrecorded songs. They accompanied themselves on guitar or keyboard, and in some cases, the other writers added a harmony or guitar licks. The songs were the stars, not the performers, and these shows were masterclasses in the art of song craft. They showed me how high the proverbial bar was and filled me with the hope that I might someday write songs as amazing as those I heard.

Listening to those songs unleashed my own song ideas, and I typically left the club with a half dozen or more titles and lyric phrases scribbled onto paper napkins and ATM receipts. As soon as I left the club, I sang my melodic ideas into a hand-held recorder. Sometimes, I couldn’t wait that long and recorded those melodies in the bathroom. In many instances, by the time I had driven the ten minutes to get home to the attic apartment I rented in a songwriter’s home, I had a finished chorus. The remainder of those evenings were spent fleshing out the verses and recording a rough version.

To be clear, I wasn’t appropriating other writers’ lines or ideas. Most of my ideas born in that club bore no connection to the songs being played. Being in a creative atmosphere, surrounded by music lovers and aspiring songwriters, and hearing such exceptional songs provided the spark that ignited my own creativity.

When we are unable to attend in-person performances, we can still get our creative juices flowing by watching online concerts. An added bonus is that by doing so, we can help support those who are unable to generate income from live shows.

Whether you are in a concert hall, a coffeehouse, a nightclub, or in front of your computer screen, hearing music performed live can be an effective way to jumpstart your creativity.

Instead of waiting for inspiration to hit, set a time to work on a new song. Whether you will be writing solo or as part of a collaboration, commit your writing session to your calendar, honor that appointment, and trust that your muse will show up.

If you are having difficulty rebounding, remember to be gentle with yourself; you are emerging from a rough time. Release the pressure and expectations that you write a hit. To break through any blocks and resistance, affirm that the sole goal of your writing is to enjoy the process.

Listen to the Music That Inspired You to Write

Revisit the music that initially made you want to write songs—the recordings that reached inside your heart and touched your soul. Let that music take you back to a time before songs were a means for you to earn a living—a time when music was pure joy, emotional expression, and catharsis. Those songs that comprised the soundtrack of our youth can be the key to unlock new songs that are waiting to be written.

Commit to a Healthy Lifestyle

In response to the stresses of the past year, many of us allowed exercise routines and stress management to slip away. By getting active, eating well, curbing harmful habits, and taking steps to reduce stress, we can create an environment conducive to creativity—a place where it can flourish.

Many musicians and songwriters find that incorporating yoga, meditation, and exercise into their routines, and spending time in nature or with animals allows them to do their best work. It is rare for me to walk in the woods or on a beautiful beach without melodies and lyrics accompanying me.

Write Songs That Can Benefit Others

It is often said that the best way to help ourself is to help others. With this in mind, we might use our talents to write songs that are vehicles to encourage others, celebrate hope, strength, and resilience, or to raise funds and awareness for charitable causes. Topics such as leaning on each other through hard times; learning how strong and resilient we are; the joys of gathering with family; and rising above life’s challenges can all be fodder for songs. Imagine the number of listeners who have been lifted up by songs such as Bill Withers’ self-written classic “Lean On Me.”

“Do They Know It’s Christmas?” was written in 1984 by Bob Geldof and Midge Ure to alleviate famine in Africa. It was recorded by Band-Aid, a group comprised of the top British and Irish acts, including Bono, Sting, Phil Collins, Boy George, George Michael, and raised more than $10 million dollars within twelve months of release. Three additional versions featuring top artists of the time were subsequently recorded in 1989, 2004, and 2014, providing money to combat famine and the Ebola crisis.

“We Are the World” (written by Lionel Richie and Michael Jackson) was also written to raise money in response to devastating famine that had claimed more than one million lives in Ethiopia. The anthem was performed by USA for Africa, which comprised a veritable “who’s who” of music superstars, including Tina Turner, Bruce Springsteen, Paul Simon, Cyndi Lauper, Billy Joel, Ray Charles, Kenny Loggins, and Diana Ross.

Twenty-five years later, the song was updated and re-recorded as “We Are the World 25 for Haiti” with additional rap parts contributed by artists including Kanye West, Snoop Dogg, and will.i.am to benefit relief efforts in Haiti, which had been ravaged by an earthquake. Soloists on that version included Justin Bieber, Barbra Streisand, Usher, Celine Dion, Nick Jonas, Adam Levine, P!nk, and Miley Cyrus. A Spanish language version directed by Gloria and Emilio Estefan was recorded by Latin supergroup Somos el Mondu, featuring solos by superstars such as Luis Fonsi, Juanes, Ricky Martin, Shakira, Pitbull, Jose Feliciano, and more.

“That’s What Friends Are For” (written by Carole Bayer Sager and Burt Bacharach, recorded by Dionne Warwick, Elton John, Gladys Knight, and Stevie Wonder) raised more than $3 million dollars for the American Foundation for AIDS Research.

Though our songs might not raise significant funds, they can significantly raise spirits.

Note that none of the above-referenced songs address the specifics of the crises that inspired them. Words such as “famine,” “death,” “earthquake,” “AIDS,” and “HIV” are not mentioned. Instead, the writers focused on strength, resilience, caring, helping, and supporting each other. With this in mind, when writing lyrics about the COVID-19 pandemic and its impact on the world, it is probably best to avoid words such as “quarantine,” “social distancing,” “I.C.U.,” “ventilator,” “pandemic,” “PPE,” “virus,” and the name of the virus.

Look back and marvel at the challenges you have overcome. Trust that you will emerge from your recent trials with a new perspective and a deeper appreciation for so many things you previously took for granted. Watch performances (including those presented online); schedule times to write with no pressure to deliver a hit; revisit the music that inspired you to write songs; commit to a healthy lifestyle that is conducive to being creative; and write songs that can help others. These tips can help you to rebound, reboot, and reclaim your creative mojo, reinvigorated and ready to turn the page and start a new, exciting chapter.

Canadian singer/songwriter Rona Goodman said, “Songwriting is the best medicine for your soul!” – and I wholeheartedly agree.

Jason Blume is the author of 6 Steps to Songwriting Success, This Business of Songwriting, and Inside Songwriting (Billboard Books). His songs are on Grammy-nominated albums and have sold more than 50,000,000 copies. He has been a guest lecturer at the Liverpool Institute for Performing Arts (co-founded by Sir Paul McCartney) and at the Berklee School of Music, and has been interviewed as a songwriting expert for CNN, NPR, Rolling Stone magazine, and the New York Times. For information about his workshops and webinars, and to read more than (85) additional articles and more, visit www.jasonblume.com.