Posted in MusicWorld on September 24, 2020 by Jason Blume 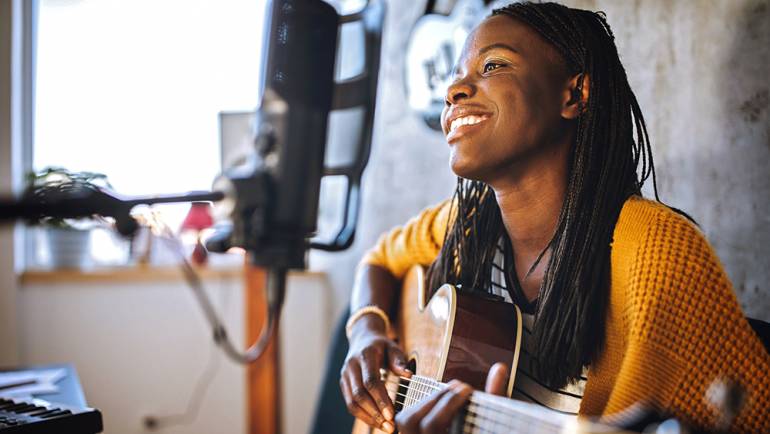 The chords we choose to accompany our melodies not only contribute to the flavor of our songs, they can provide some of those magical musical moments that make our songs hooky, exceptional, and unforgettable. To keep our listeners’ attention we need to include hooks, elements that are catchy and memorable, not only in our choruses, but in every section of our songs—the intro, the verse, the pre-chorus, the chorus, post-chorus, and bridge. It is not uncommon for hit songs to include multiple hooks within each section. In this article we’ll explore the extent to which unexpected and unpredictable chords and key changes can be implemented to keep audiences “hooked” in.

Chords make an invaluable contribution to a song’s mood. The same melody can evoke a wide variety of emotions depending on the chords that harmonize it. For example, songs that rely heavily on minor chords evoke sadness or yearning, while those with primarily major chords have the opposite effect.

An excellent resource for an analysis and understanding of chords is included in Scarlet Key’s The Craft of Songwriting: Music, Meaning, & Emotion (Berklee Press).

Keys added, “In today’s pop music, harmony has taken a backseat to groove and melody-driven hits. Today, it’s common to hear songs that have a repetitive simple diatonic chord progression that play in a loop as the melody takes center stage floating and moving above the repetitive chords below. Using a proven and common chord progression in your songs gives you an instant sonic credibility with the listener since they’ve heard it in so many songs before, and with the chords in a continuous loop, the listener can focus on the groove and melody and not be distracted by harmony.

“Although the current trend isn’t harmony focused, using a chord outside the key can bring something unique to your song and highlight and emotionalize a lyric. In Harry Styles’ song “Lights Up” (written by Thomas Hull, Tyler Johnson and Harry Styles) the majority of the song is in B♭ minor. When he sings “All the lights couldn’t put out the dark” on the word dark, he uses a B♭ major chord instead of the expected B♭ minor chord. The chords that precede this B♭ chord lead the ear to think this section is in D♭ major and in that case, B♭ would be VI major chord in the key of D♭. The major VI chord isn’t in the key but it is so bright and dominant that it’s the perfect choice for “All the lights couldn’t put out the dark.” The major chord on the word dark, makes the word dark feel light and supports what’s being said.”

An analysis of current pop hits reveals that it is not typical to incorporate chords that go beyond the predictable; ones that go outside the key; or ones that are major when a minor chord is expected (or vice versa). It is done even less frequently in country music than in other styles. However, there are some notable examples of songs that were elevated to the next level by the inclusion of one or more unexpected chords.

Listen to the attention-grabbing chord choices in the verses of “(I’m Gonna) Love Me Again” from the film Rocketman (written by Elton John and Bernie Taupin, performed by Elton John and Taron Egerton). From its first bars, David Bowie’s classic “Changes” (written and performed by David Bowie) is harmonized throughout with fresh, atypical chord changes (pun intended) that are an integral part of Bowe’s mega-hit. Also note the chord choices in the third measure of each verse of Backstreet Boys’ “Back to Your Heart,” which I wrote with Gary Baker and Kevin Richardson. Those chords make an enormous contribution to the melody’s sense of wistfulness and yearning. Dan & Shay’s “I Should Probably Go to Bed” (written by Dan Smyers, Shay Mooney, Sean Douglas, and Jason Evigan) is a perfect example of a song that incorporates attention-grabbing chords and melodic intervals to go beyond rehashing the tried, true, and predictable to push the boundaries of current country music and create something truly fresh.

In many instances, songs that include bridges incorporate a new, fresh-sounding chord in the bridge to further set this part of the song apart from the verses and chorus. One of my favorite examples of this technique can be heard in Sting’s self-written “If I Ever Lose My Faith in You.” You might also enjoy hearing Lady Gaga’s exceptional version of this song.

The only way to know if you have found the chords that most effectively evoke the emotion you envision is to try alternates and see which harmonization you prefer.

A modulation, a key change within a song, can create a memorable, dramatic moment. It can also provide a singer with an opportunity to showcase his or her vocal range, which is why modulations are often heard on singing competition television shows.

There are no rules about where to include modulations or what interval the key change should be. When a modulation is used, songs typically go up a half-step, a whole step, or a step-and-a-half (one, two, or three semi-tones). Sometimes referred to as “mods,” key changes can occur anywhere within a song, but they most often occur just prior to the final chorus. That is where the modulation can be heard in Barry Manilow’s first #1 single, “Mandy” (written by Scott English and Richard Kerr). That formula was employed with great success in many of Manilow’s best-known hits. Going up one whole step (as in “Mandy,” referenced above) is probably the most common modulation.

Daft Punk’s “Within” (written by Thomas Bangalter, Jason Beck, and Guy Christo) modulates within the song’s introduction, before the vocal even begins. While in the Beatles’ “Penny Lane” (written by John Lennon and Paul McCartney) the song modulates down to a lower key, which is rarely done. The verse is in B major while the chorus descends a full step to A major. Despite the choruses being in a lower key than the verses, the higher, legato notes and ascending note pattern create a lift and a sense of satisfaction when the choruses hit.

Going from a minor key in the verse to a major key in the chorus can be another way to modulate. This was done with great success by the Beach Boys in their classic “Good Vibrations” (written by Brian Wilson and Mike Love).

Modulations can use a pivot chord, a chord that shares a note with both the original and the new key, and serves as a connection between the two keys. I will never forget Celine Dion’s chill-bump inducing moment during the 1997 GRAMMY awards telecast when a passing chord (and corresponding note) delivered a stunned audience into the modulation in the second chorus of Eric Carmen’s “All By Myself,” which Carmen based on Serge Rachmaninoff’s Piano Concerto No. 2 in C minor, Opus 18.

Modulations can also be cold, meaning they are not telegraphed or set up. It would be hard to find a more perfect example of the power of a cold modulation than Whitney Houston’s version of Dolly Parton’s iconic “I Will Always Love You.” British band Madness’ international hit “Our House” (written by Michael Barson, Mark Bedford, Christopher Foreman, Graham McPherson, Charles Smyth, Lee Thompson, and Daniel Woodgate) used cold modulations to create exceptionally memorable moments to raise the key at the beginning of each chorus and return to the original key in the subsequent verses. The song continues to find new audiences through its use in television commercials.

The popularity of modulations has significantly waned since the ‘80s, but several recent hits have employed them. These include Lizzo’s “Lingerie” (written by Lizzo, Eric Frederic, Nate Mercereau, and Theron Thomas), AJR’s “Weak” (written by Adam, Jack, and Ryan Metzger), and “Perfect Illusion” (recorded by Lady Gaga and written by Lady Gaga, Kevin Parker, Mark Ronson, and Michael Tucker).

While chords and key changes are not typically thought of as hooks, they can indeed provide some of those magical moments that elevate our songs to the next level. We can’t know whether an unexpected chord or modulation might be the element that takes a song from “good” to “wow” unless we explore various alternatives.

Jason Blume is the author of 6 Steps to Songwriting Success, This Business of Songwriting, and Inside Songwriting (Billboard Books). His songs are on Grammy-nominated albums and have sold more than 50,000,000 copies. He has been a guest lecturer at the Liverpool Institute for Performing Arts (co-founded by Sir Paul McCartney) and at the Berklee School of Music, and has been interviewed as a songwriting expert for CNN, NPR, and the New York Times. For information about his workshops and webinars, and to read more than (85) additional articles and more, visit www.jasonblume.com.