Posted in MusicWorld on February 25, 2022 by Jason Blume 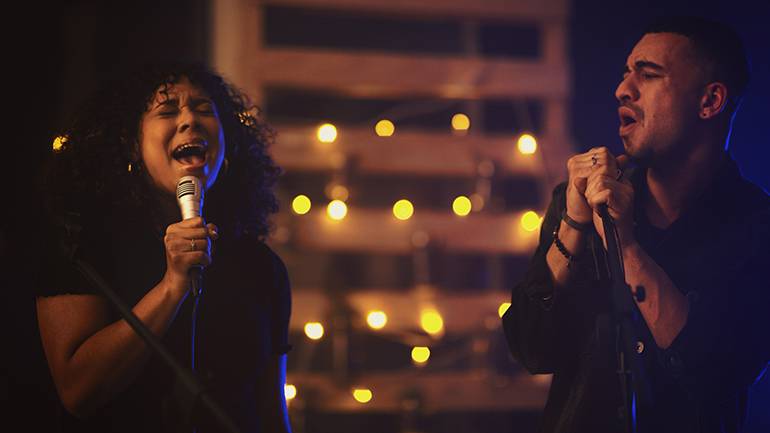 In duets, the collaborating artists typically contribute approximately the same amount to the recording. For example, a common duet scenario would have one artist sing the first verse, the other artist sing the second verse, and both artists sing the choruses and—if applicable—the bridge. However, in many cases, recordings that divide vocals in this way list one of the artists as the primary artist, while the other one is considered a “featured” artist. An example of this division of vocals can be heard on the #1 country hit “We Were Us” (written by Nicolle Galyon, Jimmy Robbins, and Jon Nite) for which the artist credit is Keith Urban featuring Miranda Lambert.

Artists joining forces is not a new phenomenon. During the Big Band era that peaked in the 1940s, recordings of instrumental bands routinely featured a vocalist. In the 1950s, Mickey & Sylvia’s recording of “Love Is Strange” (written by Ellas McDaniel, Sylvia Robinson and Mickey Baker) topped the charts. Additional duet recordings of this smash hit were subsequently released by artists including Peaches & Herb and Kenny Rogers and Dolly Parton, earning the song a place in the GRAMMY Hall of Fame.

During the 1960s the popularity of duets continued. One of the top duets of that decade was the Supremes’ teaming with the Four Tops on “River Deep, Mountain High” (written by Jeff Barry, Ellie Greenwich and Phil Spector), which was one of a series of duets that paired Motown artists. In the 1970s, Olivia Newton John and John Travolta burned up the airwaves with “You’re the One That I Want” (written by John Farrar) which sold more than 15 million copies worldwide.

The late 1970s and early 1980s saw a spike in the popularity of successful country music artists partnering for duets. Some of my favorites include Loretta Lynn and Conway Twitty’s “You’re the Reason Our Kids Are Ugly” (written by Lola Jean Dillon and L. E. White), George Jones and Tammy Wynette’s “Two Story House” (written by Wynette, David Lindsey and Glenn Tubb), and Willie Nelson and Waylon Jennings’ “Mamas, Don’t Let Your Babies Grow Up to Be Cowboys” (written by Patsy Bruce).

The ‘80s also saw Kenny Rogers’ and Dolly Parton’s version of “Islands In the Stream” (written by the BeeGees: Robin, Maurice and Barry Gibb) rise to the top of the charts.

During the ‘90s, Garth Brooks and Trisha Yearwood’s duet, “In Another’s Eyes” (written by Bobby Wood, John Peppard, and Garth Brooks) won the GRAMMY for Best Country Collaboration with vocals.

While duets and featured vocalists had been successful throughout the decades, they took on a new level of popularity with the advent of hip hop music. In many hip hop songs, a featured vocalist sings the choruses, while a rap artist provides the verses. A great example is Eminem featuring Rhianna on “Love The Way You Lie” (written by Eminem, Alexander Grant, and Holly Hafermann), which topped the Billboard Hot 100 for seven weeks, becoming Eminem’s most successful single. Similarly, many pop and R & B artists feature rappers on their recordings, for example, Snoop Dogg (who has been a featured artist on more than 580 recordings) rapping as a featured artist on Mariah Carey’s hit “Say Somethin’” (written by Snoop Dogg, Pharrell Williams, Chad Hugo, and Mariah Carey) and on Katy Perry’s “California Gurls” (written by Bonnie McKee, Snoop Dogg, Benjamin Levin, Brian Wilson, Mike Love, Dr. Luke, Katy Perry and Max Martin).

The winner of the Best Jazz Vocal Album GRAMMY was yet another recording with a featured artist: Secrets Are the Best Stories by Kurt Elling, featuring Danilo Pérez. The 2021 Best American Roots Performance GRAMMY was awarded to Norah Jones and Mavis Staples for “I’ll Be Gone” (written by Pete Remm).

There does seem to be a trend of country artists dueting with pop artists to appeal to both the pop and country music markets.—Woody Bomar (Green Hills Music Group)

This trend of collaborations recently contributed to the successes of a slew of songs that brought together artists, in many instances, from different genres, creating crossover hits. Examples include “One Too Many” (written by Daniel Davidsen, Mich Hansen, Peter Wallevik, Boy Matthews, and Cleo Tighe; recorded by Keith Urban with P!nk), “I Hope” (written by Gabby Barrett, Zachary Kale, and Jon Nite; recorded by Gabby Barrett featuring Charlie Puth), and “Meant to Be” (written by Tyler Hubbard, Joshua Miller, Bebe Rexha, and David Garcia; recorded by Bebe Rexha featuring Florida Georgia Line).

In addition to the creative rewards that result when artists from different genres collaborate, these recordings can benefit by receiving airplay in multiple radio formats, exposing the artists to more potential fans.

In EDM (electronic dance music) the music is the star—not the vocals. Therefore, in almost all EDM songs that include vocals, the vocalist is credited as a “featured” artist, rather than as the main artist.

Contrary to what those steeped in pop or country music would expect, the person listed as the artist on an EDM recording is the person (or team) who creates and produces the music track. In most cases, this artist is not a vocalist, so most EDM songs include a “featured” artist who provides the vocals. For example, 2021 GRAMMY-winning Best Dance Recording, “10%” (written by McKinley Jackson, Melvin Steals, Mervin Steals, Karly Loaiza and Kevin Celestin) is credited as being performed by Kaytranada featuring Kali Uchis. Kaytranada is the professional name of Louis Kevin Celestin who does not sing. Kali Uchis performs the vocals. Every nominee in the 2021 GRAMMY’s Best Dance Recording category included a featured artist.

Writing and Recording Demos of Duets and Songs with Featured Artists

In many cases, songs that are recorded as duets—or with featured artists—are not written specifically for this purpose. In most cases these are songs that were written to be pitched to one artist, but their lyrics were adapted to work for multiple singers.

There are limited opportunities to pitch duets, so lyrics that only make sense when sung by more than one artist—for example, lyrics in which the vocalists sing the roles of romantic partners singing to each other—have far fewer chances to find a good home than their solo counterparts. Also bear in mind that in many cases, an artist might choose to record a song before they know that they will include a featured artist or a duet partner on the recording.

If necessary, most lyrics can be revised to function as a duet. When budgets allow, if you envision your songs a perfect duet, record two demo versions—one to pitch for solo artists and the other for duets. Another option is to create an alternate lyric suitable for duets, delineating which lines would be sung be each of the duet partners. When a duet is being sought, this lyric sheet can be submitted along with a recording that has only one vocalist.

When it does not impact the integrity of the song, increase the chances of your song being on a recording with a featured artist or as a duet by writing lyrics that will readily work both for solo artists—and for multiple vocalists. To paraphrase an old saying, “Sometimes, two artists are better than one.”

Jason Blume is the author of 6 Steps to Songwriting Success, This Business of Songwriting, and Inside Songwriting (Billboard Books). His songs are on Grammy-nominated albums and have sold more than 50,000,000 copies. He has been a guest lecturer at the Liverpool Institute for Performing Arts (co-founded by Sir Paul McCartney) and at the Berklee School of Music, and has been interviewed as a songwriting expert for CNN, NPR, the BBC, the New York Times, and Rolling Stone. For information about his workshops, webinars, additional articles, and more, visit www.jasonblume.com.