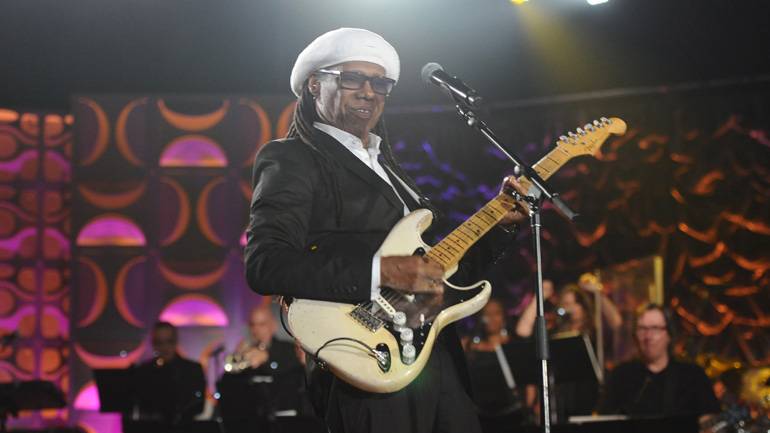 BMI is proud to congratulate Nile Rodgers and Chip Taylor, who led this year’s class of inductions into the Songwriters Hall of Fame, as well as BMI affiliates Seymour Stein, who was presented with the Howie Richmond Hitmaker Award, and Nick Jonas, who received the Hal David Starlight Award, during the gala on June 10 in New York City.

As one of the founders of Chic, the legendary songwriter, producer, guitarist and BMI Icon Nile Rodgers pioneered a fusion of pop, rock, R&B and funk into an elegant hybrid that defined the disco era. Alongside partner Bernard Edwards, Rodgers turned Chic into a consistent hit-machine whose influence still resonates today, and collaborated with an unmatched roster of artists including Sister Sledge, Diana Ross, Madonna and David Bowie, among many others.

Hailing from Yonkers, New York, Chip Taylor was an unlikely acolyte of country music, but his love for the genre prompted him to become one of Nashville’s most highly touted songwriters. Taylor’s restless muse found him branching out, leading him to a remarkable career writing timeless tracks for luminaries from Willie Nelson to Janis Joplin, Fats Domino to Linda Ronstadt, Aretha Franklin to Frank Sinatra and many more. He’s also recorded over 25 albums of his own music, and continues to do so to this day.

In addition, the Howie Richmond Hitmaker Award was bestowed upon Sire Records co-founder and chairman, Seymour Stein. Through Stein’s insight, Sire introduced the world to the excitement and innovation of punk and new wave, ushering in a generation of impactful musicians and songwriters. Were it not for his appetite for new sounds and new sensibilities, artists like the Ramones, Talking Heads, the Pretenders, the Smiths, the Cure, Depeche Mode, The Cult, the Replacements and Madonna might have stayed unknown quantities.

Also honored was singer/songwriter Nick Jonas, who received the prestigious Hal David Starlight Award, an accolade presented specifically to young songwriters who are making a significant impact in the music industry with their original songs.

Though most renowned as one of the Jonas Brothers, Jonas was involved with music long before his tenure as a pop sensation. He cut his teeth performing on Broadway at the age of seven and started writing his own music not long after. Today, he’s already a multi-platinum solo artist on the rise.

The festive ceremony was marked by stirring musical performances. Among the evening’s highlights, singer/songwriter and Empire star, Jussie Smollett delivered a silky rendition of the late Marvin Gaye’s “What’s Going On,” followed by Rachel Platten’s impassioned performance of Chip Taylor’s “Angel of the Morning.” Taylor himself strapped on his guitar to revisit his classic rock anthem, “Wild Thing,” flanked by his three granddaughters on backing vocals. Renowned Byrds singer/songwriter Roger McGuinn gave Tom Petty’s signature single, “American Girl,” a spirited reading, while Nile Rodgers brought both the evening to a close with irrepressibly funky renditions of “Le Freak” and “We Are Family,” joined by Sister Sledge.

Overall, the evening was a stunning testament to the remarkable gift of songwriting. Congratulations to all!