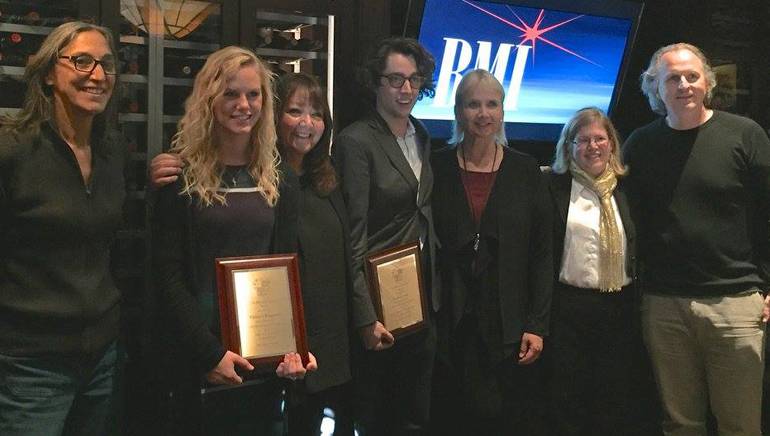 BMI composers Lolita Ritmanis and Miriam Cutler completed a full day of giving expert first-hand advice to Berklee College of Music students during BMI Day at Berklee on November 14. The curriculum for the highly anticipated day included a master class taught by the award-winning composers, as well as a key note panel discussion that focused on their experiences working in the industry and scoring various critically acclaimed projects. In addition, BMI scholarships in honor of the two female composers were presented to talented students Vincent Isler and Victoria Ruggiero during a luncheon attended by Ritmanis, Cutler, Berklee VIP’s and faculty, as well as BMI Vice President of Film, TV & Visual Media Relations, Doreen Ringer-Ross, who spearheads the annual event at the renowned college.

“These scholarships continue our mission of supporting young and emerging composers at the college level,” stated Ringer-Ross. “We support Berklee’s commitment to excellence in music and film scoring and we are particularly proud to be bringing two strong women composers as role models to present them for us this year.”

Each year a scholarship is given to a Berklee student in the name of a noted BMI composer and this year both Ritmanis and Cutler were recognized. Emmy-winning Ritmanis’ credits include hundreds of hours of music scored for Batman Beyond, Batman: The Killing Joke, Marvel’s Avengers Assemble, Justice League, and Superman, to name a few. Cutler, who has scored and/or written songs for more than100 films and television programs, is Emmy-nominated and has also created music for circus and theater projects. Other creative endeavors include producing and recording albums and performing live in many bands and venues. Her credits include HBO’s Emmy-winning Ghosts of Abu Grahib and Vito, Emmy-nominated Ethel and Thin, Oscar-nominated Poster Girl and King’s Point, and films The Hunting Ground, Family Affair, Lost in La Mancha and One Lucky Elephant, among others.

BMI is also very proud to include newly named Chair of Berklee’s film scoring department, Alison Plante, as an award-winning BMI composer. Plante, whose work includes documentaries for PBS, the History Channel and the Annenberg Channel, as well as independent films, national television spots, museum installations, and live theater, is the first woman ever to hold such a position at any film scoring department in the country. Additional details regarding Plante and her many accomplishments can be found here.

The busy day was capped off by a meeting with student members of the school’s Women’s Film Initiative, as well as with a senior seminar on film scoring.