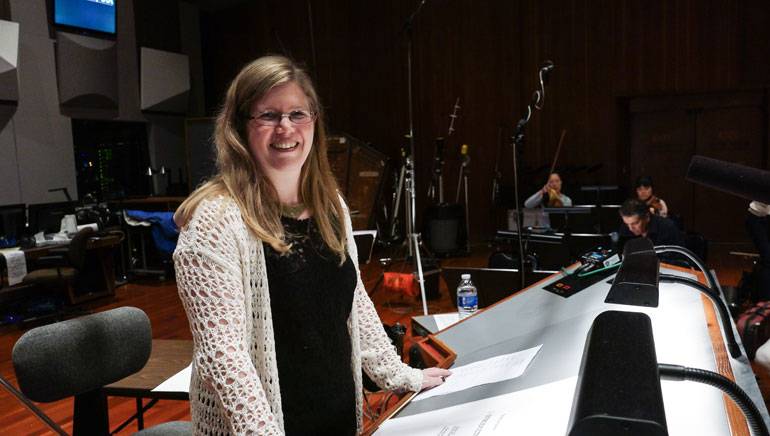 BMI is proud to welcome composer Alison Plante as a new member of BMI. Plante, whose work includes documentaries for PBS, the History Channel and the Annenberg Channel, as well as independent films, national television spots, museum installations, and live theater, just became chair of the film scoring department at Berklee College of Music in Boston. She is the first woman ever to hold such a position at any Film Scoring department in the country. BMI will again support this program at Berklee with its annual BMI Day this Fall. We asked Plante to tell us some of the exciting new initiatives she will be incorporating into the already renowned curriculum. Here’s what she said.

“To establish a new Documentary Practicum, I made a connection with the GroundTruth Project, which helps emerging filmmaker/journalists produce short films for social and environmental justice. This Fall, eight students will work with Associate Professor Ruth Mendelson to score as many short films produced by GroundTruth fellows, hopefully to be premiered at the COP22 climate change conference in Morocco in November.

To promote Guitar Collaboration, I drew on experiences during my sabbatical when I saw guitarist George Doering playing on scoring sessions all over LA and working in a creative, collaborative way on many of these projects, I worked with Berklee’s guitar department to create a new project for our Dramatic Scoring 2 class in which each film scoring student gets a half hour in the studio with a trained session guitarist working collaboratively on a cue. The guitar department also developed new curriculum to support this project, with a new Guitar for Film Scoring class.

Women’s Film Initiative: I serve as faculty advisor to this dynamic student club; this past year the club and I partnered with Emerson’s Women in Motion and their Visual Media Arts Department in a “Women in Media Summit.”

Sound Design and Dub: Building on the Film Scoring Practicum I began in 2009, this past year we have added a paired Sound Design Practicum course (taught by Electronic Production & Design Chair Michael Bierylo) to provide student filmmakers with both score and sound design. In addition, we also piloted offering dubs on our dub stage, mixed by Music Production & Engineering majors. In the coming year we hope to formally pair our curriculum more fully with Music Production & Engineering’s new minor in Audio Postproduction.

Game Scoring: Berklee continues to have a strong game scoring curriculum, including an entire minor in Video Game Scoring, spearheaded by Associate Professor Michael Sweet. In the next few years, we will continue to expand this program.

Silent Film Nosferatu with the Boston POPS: In October of 2015, we had our most ambitious silent film performance yet, with students working with Professor Sheldon Mirowitz to compose an orchestral score with Theremin and Moog that was performed live to picture and conducted by Keith Lockhart.

Massachusetts College of Art & Design Collaboration: I partnered with “Mass Art” to have all of their junior animation PSA projects scored by senior film scoring students, for a total of more thanr 40 collaborative projects. This was the first time that every Film Scoring major will graduate having scored at least one “real” project (i.e. in collaboration with a filmmaker).

In addition to these new endeavors, Terence Blanchard was a visiting scholar at Berklee this past year and we did several things with him, including having him speak to our senior seminar, piloting a Jazz in Film class, and having him record a cue as a demo session with our “3 Course Collaboration.”