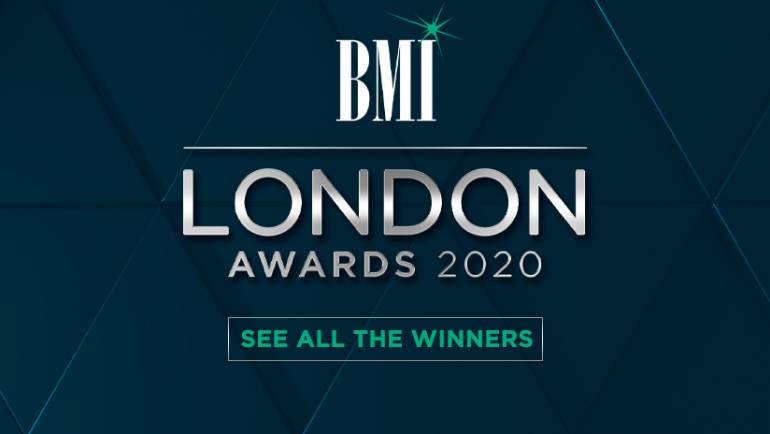 BMI today paid tribute to the top UK and European songwriters, composers and music publishers of the most-performed songs of the previous year with the 2020 BMI London Awards. Honourees for Song of the Year, Million-Air Awards, Top 30 Pop Songs and Film, TV & Visual Media were celebrated across BMI’s digital and social channels. To recognise their remarkable achievements, BMI created a special page on its website where fans can watch video messages, listen to award-winning songs and take a look back at the best award show moments throughout the years.

“We’re thrilled to pay tribute to BMI’s top UK and European music creators and celebrate the numerous ways their artistry and creativity have enhanced the lives of many over the past year,” said Shirin Foroutan, Vice President, Creative, Europe. “From BMI’s first-time award winners to our legendary songwriters and composers, we thank you for your enduring musical contributions, and we look forward to celebrating with you all in person at next year’s ceremony.”

“Dancing with a Stranger” by Sam Smith and Normani received the coveted Song of the Year, which is awarded to the most performed song in the United States of the previous year by a UK or European writer. On recording the single, Normani told Billboard that the duo came together for the track when she happened to be at the same studio during the recording and Smith asked, “Do you want to jump on it?” From there, the sultry track went on a steady climb before reaching #1 on Billboard’s Radio Songs and Adult Top 40 charts, and according to Billboard, ranked #4 on the list of the most played song on U.S. radio in 2019, after receiving over three billion audience impressions. Smith was also recognised for “How Do You Sleep?” bringing the multiple GRAMMY-winning singer/songwriter to ten BMI London Awards and six BMI U.S. Pop Awards. This marks the second BMI London Award for Normani, who already has three BMI U.S. Pop Awards among her honours.

Adding to her many accolades, Ellie Goulding received recognition for her hits “Hate Me” and “Close to Me,” bringing her BMI total to nine London Awards and seven U.S. Pop Awards. Additional highlights include Niall Horan receiving his seventh BMI London Award for co-writing “Nice To Meet Ya,” while Caroline Ailin was honoured for co-writing “Don’t Start Now” and Kamille was recognised for her break-up anthem “Don’t Call Me Up.” This is the second BMI London Award for both Ailin and Kamille.

This year, BMI welcomed 34 first-time London Pop Award winners to the elite list of honourees. Some of the new inductees include Eyobed “EY” Getachew and Ella Mai (“24/7,” co-written with Nija Charles), Sam Roman (“Someone You Loved,” co-written with Tom Barnes), Chance the Rapper (“Cross Me,” with Ed Sheeran), Chase Dalton Rose and Ski Mask the Slump God (“Faucet Failure,” co-written with Kevin and Tim Gomringer) and Charlie Handsome (“Right Back,” co-written with Mike “Scribz” Riley, Khalid and Brenda Russell).

SONG OF THE YEAR (The Robert S. Musel Award)

SCARY STORIES TO TELL IN THE DARK
Anna Drubich

YOU’RE STILL THE ONE
Shania Twain

WE WILL ROCK YOU
Brian May
Queen Music Ltd.
Sony/ATV Music Publishing Ltd

WHOSE BED HAVE YOUR BOOTS BEEN UNDER?
Shania Twain