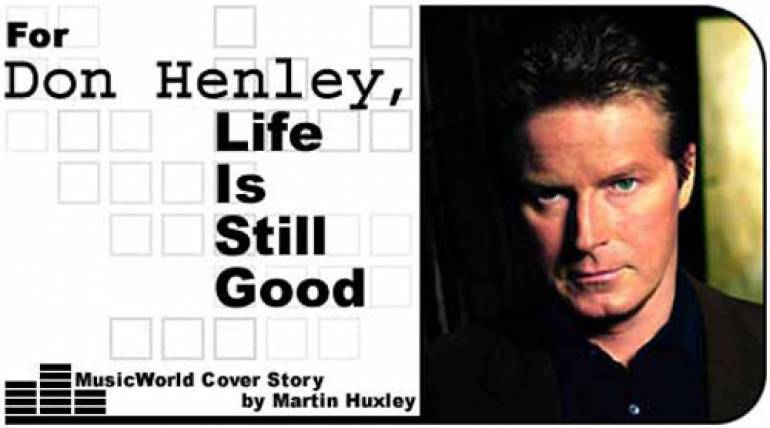 "After a couple of decades of being a public figure, a person grows tired of his own face, his own voice," says Don Henley, explaining the extended gap between his last solo album, 1989's multi-platinum The End of the Innocence, and the new Inside Job.

"If this malaise is allowed to continue unchecked," the Eagles co-founder continues, "it can deteriorate into something that my pals and I call 'Death by Show Business.' This doesn't refer to literal death, although that is sometimes the case, but more to a loss of enthusiasm and a withering of creativity, a sort of atrophy of the spirit. One day you wake up and you're wearing the pathetic clown suit. Although I always tried to lead a varied life that included charitable work, I had reached a point where I wanted to do something proactive, something that wasn't completely me-oriented."

Towards that end, Henley spent much of the 1990s - a period that he describes as "Mr. Toad's Wild Ride" - engaged in a diverse array of artistic, philanthropic and personal endeavors. He helped to found the Walden Woods Project (www.walden.org), which has become a leading light in the environmental movement, first raising funds for the purchase and preservation of the fabled Walden Pond woods, and subsequently expanding its reach to include educational and research programs. Henley has also been active in working with several other environmental organizations, as well as such worthy causes as Farm Aid, The Race to Erase MS, and the Rhythm and Blues Foundation.

In recent years, Henley also found time to reconnoiter with his former Eagles bandmates for a live album, Hell Freezes Over, and a monstrously successful reunion tour. He also spearheaded the all-star Eagles tribute album Common Thread: The Songs Of The Eagles, a successful fundraiser for the Walden Woods Project.

In January 1994, Henley saw his Los Angeles home destroyed by the Northridge earthquake, and took that disaster as a hint to relocate to his native state of Texas. In May 1995, he married longtime companion Sharon Summerall; the couple has since welcomed the arrival of a daughter and a son. Another new addition was Henley's own studio, Samain Sound, where some of Inside Job was recorded.

Henley describes Inside Job - which he co-produced with Stan Lynch, formerly of Tom Petty and the Heartbreakers, and which features guest appearances by Randy Newman, Stevie Wonder, Jimmie Vaughan and Henley's old Eagles partner Glenn Frey - as "a diary of sorts, a chronicle of the past 11 years." The album's 13 songs find the artist examining such significant issues as abuse of power ("Inside Job"), ecological irresponsibility ("Goodbye to A River"), corporate culture ("Workin' It") and family life ("For My Wedding," "Everything Is Different").

"Inside Job is my view of the world from this particular time and place," Henley concludes. "My marriage and the birth of my children have had a profound effect. Despite all the sham and selfishness, life is still good. Children constantly rekindle hope and appreciation, and they have excellent bullshit detectors. It's a wonderful thing."