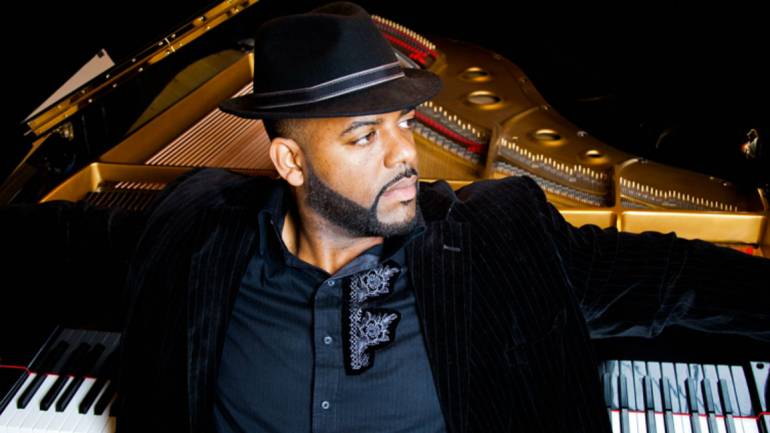 Aaron Lindsey has been tirelessly making music for over two decades. As a singer, prolific songwriter, multi-instrumentalist, producer and arranger, his list of collaborations is as long as it is impressive, including a wide host of Gospel luminaries like Marvin Sapp, CeCe Winans and Israel Houghton as well as contemporary R&B hitmakers like Indie.Arie, Jill Scott and Sheila E., among many others. The son of a choir director, Lindsey has been surrounded by songs of faith and devotion his entire life, and has dedicated his career to furthering the art form. As a six-time GRAMMY winner and seven-time nominee, he has established himself as a formidable figure in the music industry.

Lindsey’s most recent project, however, is all about giving back and reaching out. Released at a time that is rife with trauma, Lindsey’s new single, “Take Care,” is a heartfelt open-letter about preserving one’s mental health in a stressful environment. The soulful song encourages those struggling to stay the course, look after themselves and persevere

BMI recently caught up with Lindsey to learn more. Here’s what he had to say.

“Take Care” is surfacing right when the country is in a particularly divisive state due to a wide number of factors. While it’s obviously an immensely personal song, was the current state of the world a factor in wanting to release it now?

The timing of the release was absolutely connected to the current state of the world. Ironically I wrote the song in 2017, based on my own personal battles with anxiety and depression. I wrote it as a personal encouragement, but when I started singing it, I realized it wasn’t only for me. I felt like I was journaling my experience for other creatives who were feeling the same weight. Little did I know that it was going to be a tool for people who eagerly anticipated 2020 vision, but got blind-sided at the turn of the new decade.

The song contains a powerful message of encouragement to people who may be struggling with personal crises. What first inspired you to write this, and have there been times when you yourself needed to hear such a hopeful message?

It has been my experience that creatives have high highs and low lows. Working among them most of my life, I have always tried to help.  But helping others can be a form of avoidance. Ultimately, I hit a wall and the wall hit back. I decided to write what I needed to hear. There are songs about suicide prevention and other mental health topics yet nothing out there was as deliberate to say “Take Care of Your Heart Soul and Mind” aside from meditation music.

Why do you think mental health is a topic so many are reluctant to discuss head on?

People usually discuss what they value. The community you are a part of influences your value of caring for your mental health.

Males are raised to walk it off, shake it off or play it off. Black communities generally don’t invest in it and typically avoid therapy because of the potential stigma of being unstable. In many communities, it’s seen as a waste of time or money.  Christians are usually so spiritually focused that they don’t place a high value on it.

The strain on us in this current crisis will likely change some of that because millions of people daily are crying out for help. I hope we all begin to value mental health more so we can discuss it without shame and fear.

You’ve also just collaborated again with Marvin Sapp. How did “Thank You For It All” come together.

Jarmone Davis and Marvin had this song and it was awesome. I have worked with Marvin for so many years that I know his sound and style pretty well. We agreed that it needed one last piece to bring it home for him. I grabbed a pen, pad and sat down at the piano. They loved it and the song was complete. Thankfully we recorded it live in Ft Worth at his church in February just before the shut down.

You recently re-recorded two classics by Fred Hammond, “Blessed” and “Agnus Day.” What made you pick and re-interpret those particular songs?

I have been the world’s biggest Fred Hammond fan since I was a pre teen. I was “Blessed” to be a part of the RFC touring band for a while and got to play it on the road and I have always loved it. It’s a classic that needed a “revisit.” Agnus Dei was recorded by a talented musician friend of mine named Doobie Powell.I heard his interpretation and asked him if I could do my own interpretation of his version. So I guess my version is two generations removed from the original.

You’ve had a remarkable amount of success as a producer, an arranger, a composer and a songwriter. Is there one single discipline you feel most comfortable in?

I feel most comfortable playing piano. It’s where it all started.

What do you believe the role of a songwriter is?

In the words of Willy Wonka, “We are the music makers, we are the dreamers of dreams.” I believe we make the invisible visible. We create soundtracks for life. Songwriters are poetic journalists with melodic magic. Simply, we tell the truth but tell it beautifully.

Tell me a little bit about your relationship with BMI.

I’ve been with BMI since I began as a songwriter and they have been so wonderful. There are other PROs and I feel sorry for their writers, because BMI is awesome. They have facilitated so many things for me and always been just a phone call away.  Catherine and Wardell have always been allies and friends,not just business constituents. I’m grateful to be a part of such a powerful creative community. There are so many more things in view and I am happy to know that no matter how lofty the idea, this team supports me!