Posted in MusicWorld on September 22, 2022 by Dave Simons 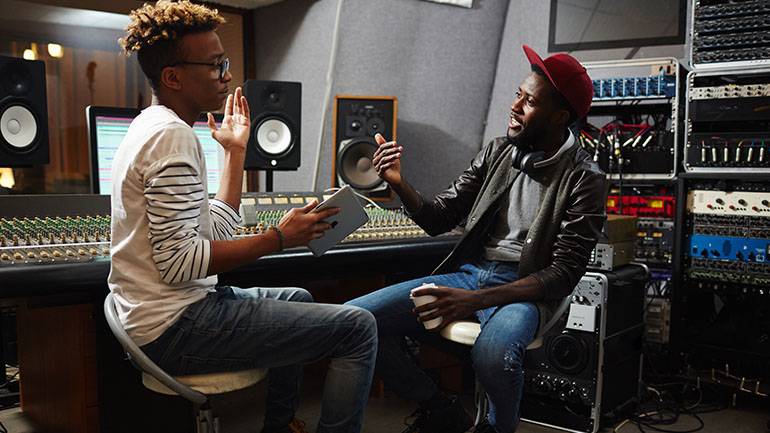 When trying to compose a new song and nothing is happening right away, occasionally I find it helpful to conjure a particular artist, genre or era, and use that as the basis for crafting something original. For instance, I might think of a riff that hints at early-‘80s techno pop, and, to make it a true pastiche, create an arrangement with all the trappings of the time—big synths, electronic click track, keyboard bass and extra-large vocal echo. Or if I wanted an old-school jazz sound evocative of early Blue Note recordings, I might encourage things like live reverb, room sound, and natural dynamics in general.

The thing is, along the way I’m just as likely to abandon the original premise and rearrange the song using a completely different (and perhaps updated) format. Regardless, by focusing on a specific sound, I’m often able to jump-start the whole writing process.

Not only is this method more interesting than the usual routine, it gives you some insight into the various ways records have been crafted over the years. For our purposes, we’ll look at several different periods of music and the techniques that helped define each, with the goal of working some of that old engineering magic into your current productions.

Sounding like the ‘60s. The fabled decade saw historic advances in popular music, and, in turn, music production. Studios from the time were often enormous by today’s standards, and that ambience figured prominently in the sound of the records. Multitrack tape machines became standard equipment during this time, and artists took advantage by frequently doubling lead and background vocals. Even so, groups continued to perform live in the studio, and the sound of instruments bleeding into one another is yet another hallmark of the era. Reverb was applied liberally throughout, and by the end of the decade artists made heavy use of compression, not only on vocals but drums, piano, even acoustic guitars.

That ‘70s sheen. With studios offering 48 tracks or more, during the 1970s artists increasingly began building songs layer by layer, rather than as a single live performance. In turn studios began to downsize, and these smaller rooms were now padded with acoustic treatment so that engineers could carefully control vocals and instruments that were now assigned to their own separate tracks. Accordingly, sound leakage—a key ingredient during the previous decade—was now frowned upon. Drums became drier and were direct-miked, bass was moved to the fore and had greater articulation and, for extra measure, background vocals were often overdubbed innumerable times and spread in stereo.

Key ingredients: Diminished room sound as multitracking encourages focus on individual parts; natural dynamics reduced; wider stereo spread
Drums: Dry & close-miked, with greater emphasis on kick drum as funk and dance music takes hold; engineers begin using microphones on each drum, rather than capturing the entire kit with overheads
Guitars: The heyday of electric guitar as artists seek specific amp types for their unique tones and effects such as delay and chorus to hone their sound; for the first time acoustic guitars become a focal point in pop music led by the burgeoning singer-songwriter movement
Vocals: Increased use of plate reverbs and compression give vocals their telltale ‘70s sheen

The straight-in ‘80s. During the 1980s digital-recording technology made its mark on the music world, and within a few years synths and drum machines would become staple items for nearly every recording artist from the time. With so many sounds coming out of a box, microphones were reserved for vocals and not much else, and by the mid-‘80s this straight-in approach would inform the majority of pop hits, bringing genres like techno and hip-hop into the mainstream while rendering acoustic music all but obsolete.

A ‘90s revival. Just when it seemed like the era of pure analog was gone for good, during the 1990s new producers like Butch Vig and Brendan O’Brien helped launch a mini backlash, utilizing old-school studios (such as L.A.’s famed Sound City) and techniques in an effort to put some of the dynamics back into the recording environment. The sound they achieved gave rise to the influential West Coast grunge and punk movement during the early part of the decade, and in the years that followed artists would continue to eschew synths and samples in favor of bone-dry guitars and up-front vocals.