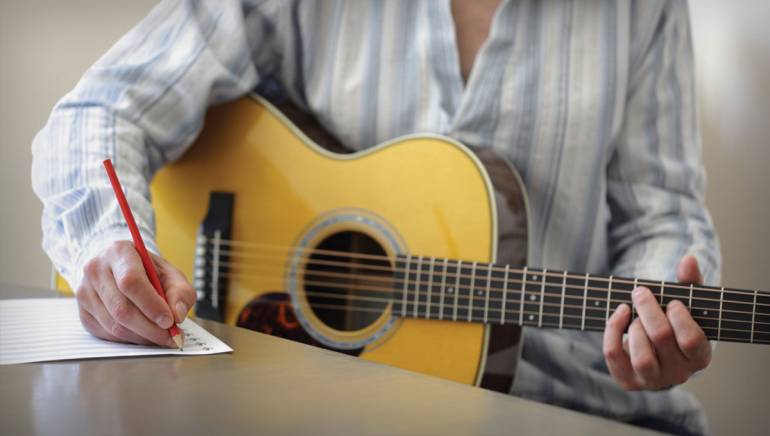 Songwriting is art. Like all art, songs require a healthy dose of inspiration, which is nearly impossible to predict or control. In that way, the spark that results in the creation of a song is a gift but the rest of the process is nothing more (or less) than good, old-fashioned work. By following through in a variety of different ways, you stand a much better chance of achieving the goal of getting your songs out in the world and hopefully generating some income for you.

1. The Song Gets Finished. We all have them: bits and pieces of what seemed like a good start to a song that have languished in notebooks or lost folders on our laptops. This is an unavoidable and necessary part of the creative process, but there comes a time when some of these ideas should be finished. Not all songs come easily and, on occasion, some of the best ones are ideas that just needed a little elbow grease to finish up. By reviewing some of these orphaned ideas from time to time, you’ll often find that there’s something well worth finishing. By following through in this way, you’ll end up with songs that might not otherwise have happened.

2. The Song Gets Demoed. Having a finished song is a victory in and of itself. That being said, the reality of our business is that these finished songs need professional demos in order to give them (and you) a fighting chance of being acknowledged by the decision-makers in the music industry Having a bunch of great songs that aren’t presentable isn’t a viable way of pursing a professional songwriting career. By the way, not every song you write will be demo worthy but for those that are, following through with a plan on how and when to make high quality recordings of them is a big step towards having your songs generate income for you. Like any business, you need to invest money in order to eventually make it.

3. The Song Gets Cut/Placed. Okay, so you’ve got a great song and a beautiful sounding recording of it. Congratulations. However, if only a small group of family and friends ever hear it, then it might as well not exist in the eyes (and ears) of the industry. I’ve talked about this in previous articles, but there is nothing romantic about pitching your songs. It’s work. Still, it is an absolute necessity if you’re hoping to sell your music. Follow-through can take a variety of forms here, including reading industry pitch sheets to find artists looking for new material, seeing which music supervisors are looking for songs for a film or television show and even making sure that an up-and-coming artist in your community (without a record deal) has a chance to put their vocal over the instrumental mix of your existing demo. In other words, get your songs out there. By the way, just in case you think sending your song to someone means your work is done here, it’s the follow-up (and follow-up and follow-up) that separates the pros from the novices. Never assume that just because you’ve sent in your song you can sit back and wait for your phone to ring. I highly recommend placing a note on your calendar to follow up with an email or phone call two weeks later and two weeks after that if you still haven’t heard anything. By following through on your pitches and following through on your follow-through (getting my point?), you’ll give yourself a fighting chance of getting your songs heard — after that, the sky’s the limit.

Talent is a wonderful thing. On some level, we’ve all got it. However, what separates the success stories from the tragically unrecognized geniuses is what you do after the inspiration is over. By digging in, doing the work and following through you’ve got a much better shot at the kind of songwriting success we all dream about.

Cliff Goldmacher is a songwriter, producer, session musician, engineer, author and owner of recording studios in Nashville, TN and Sonoma, CA. Cliff’s site, Educated Songwriter, is full of resources for the aspiring songwriter, including a brand new HD video series.

You can download a free sample of Cliff’s eBook, “The Songwriter’s Guide To Recording Professional Demos”.