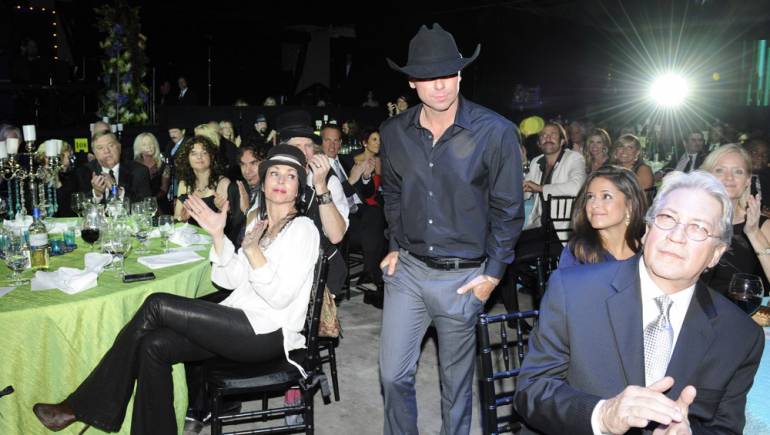 Kenny Chesney hits the stage to receive an award for “Somewhere with You” during the 2011 BMI Country Awards, held November 8 in Nashville.

With nine nominations, Kenny Chesney pulled ahead of the elite pack. Along with Entertainer and Male Vocalist of the Year, Chesney’s work earned nods Album, Song and Single of the Year categories, as well as the collaborative Vocal Event of the Year field.

Jason Aldean follows with six nominations, which also include Entertainer, Male Vocalist, Album and Single of the Year. Lady Antebellum scored five nods – the most of any group. Taylor Swift earned three nominations, including her third consecutive tap for Entertainer of the Year. Swift is the only woman vying for the top prize, which she took home last year.

The Songwriter of the Year field is stacked with BMI hit-makers: Luke Laird, Dallas Davidson and Rhett Akins.

Fans will vote to determine the Entertainer of the Year, as well as the New Artist of the Year. Winners of the 47th annual Academy of Country Music Awards will be announced on Sunday, April 1, 2012 at 8 p.m. EST in the MGM Grand in Las Vegas, live on CBS. For more information, visit acmcountry.com.

“Tattoos on This Town” – Jason Aldean