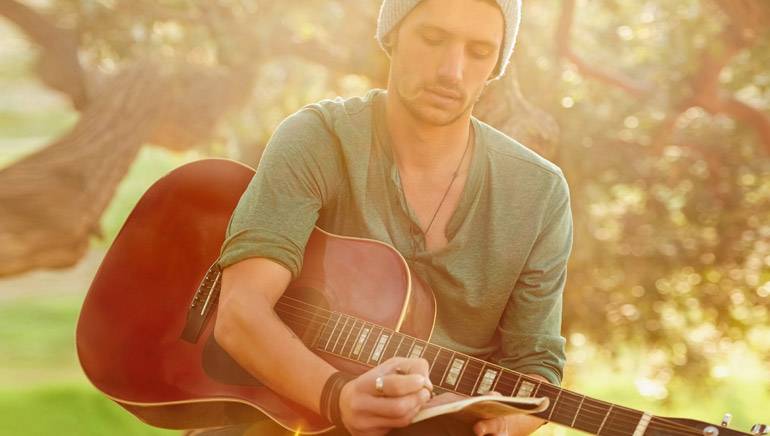 “Show—Don’t Tell” is one of the basic tenets taught in almost every songwriting class. Writing cinematic lyrics—lyrics that incorporate visual imagery that listeners can envision like a movie in their minds—is often thought of as one of the most effective ways to connect with audiences. Cinematic lyrics do not spell out what the singer is thinking or feeling. Instead, by using action and visual imagery, they “show” a scene unfolding, and this allows the listener to surmise the singer’s emotions.

For example, let’s look at a lyric that states, “Last night, I put on the faded blue Titans T-shirt you left behind and lay awake sobbing black mascara tears into the pillow where you used to lay your head.” In this example, the singer never states that she was feeling heartbroken, sad, or lonely, but these emotions are clearly conveyed by the action and pictures.

Songs with lyrics that feature visual imagery typically do so in the verses. Chorus lyrics tend provide a summation of the song’s concept and don’t often include detail or “pictures.”

While writing in a “visual” or “cinematic” style can be quite effective, a look at some of today’s biggest hits, and some of the most iconic songs of yesteryear, reveals that many songs top the charts and insinuate themselves into the soundtracks of our lives without employing this style of writing. So, let’s look at the tools and techniques that can contribute to successful non-visual lyrics.

Build on a Fresh Angle

The strongest lyrics (including those that use a cinematic approach, and those that do not) tend to be those built on the foundation of a fresh angle, a way to address the subject in an original manner. When writing songs about a topic that is widely addressed, such as “I love you”; “it’s over”; “wishing for love”; “being angry at an ex”; or “dreaming of a better life,” finding new ways to express these ideas becomes especially important.

A unique angle can be heard in “Friends” (recorded by Justin Bieber w/BloodPop and written by BMI Songwriter of the Year Justin Tranter, Julia Cavazos, Michael Tucker, and Justin Bieber). In this lyric, a question is posed: does the relationship really have to end when it ends. This is an exceptionally novel way to address the age-old question, “Can we still be friends?”

Although the lyric includes no visual images, by asking specific questions within the context of a conversation, the singer conveys emotions that resonate with almost anyone who has experienced the pain of love ending. He asks his ex-girlfriend if she has found someone new, how her mother is doing, if her mom got a job she had hoped for, and if she sold her car? These questions are a highly original way to convey the ache of wanting to remain connected after having shared an intimate relationship.

Having a unique concept is important, but it is not enough. By using the tools that follow we can craft lines that go beyond the predictable and the cliché—lines that will make an artist feel, “I wish I had written that,” and lyrics that will compel fans to tell their friends, “You’ve got to hear the words to this song.”

I’ve heard it said that if anyone else could have written a line of lyric the same way you have written it then you need to revisit it and make it stronger, more distinctive, more original.

A metaphor is a figure of speech that calls something by the name of something else with which it shares characteristics. Shakespeare famously used this technique when he wrote “All the world’s a stage.”

Jerry Lieber and Mike Stoller used metaphor when they wrote, “You ain’t nothin’ but a hound dog,” for their classic song “Hound Dog,” which was a mega-hit for both Willie Mae “Big Mama” Thornton and Elvis. Similarly, Katy Perry describes someone as a “Firework” in her hit (written by Esther Dean, Sandy Wilhelm, Mikkel Eriksen, Tor Hermansen, and Katy Perry).

“Yours,” Russell Dickerson’s breakthrough hit (written by Dickerson with Parker Welling and Casey Brown), makes excellent use of metaphor, with the singer stating that he was a boat stuck in a bottle that sat on a shelf and never got the chance to sail. The lyric includes additional metaphors that describe him as a burnt-out star, a worn-out set of shoes, and empty pockets on a roulette wheel. These descriptions are infinitely more compelling than if he were to sing “I was lonely and lost before I met you.”

A simile is similar to a metaphor, but while a metaphor states that one thing “is” another (“He is a brick wall”), a simile states that one thing is “like” another (“He is like a brick wall,” or “He is as dumb as a brick wall.”). The chorus of the #1 country hit “Craving You” (written by Julian Bunetta and David Barnes and recorded by Thomas Rhett, featuring Maren Morris) is a perfect example of the use of simile. In this lyric, the writers describe someone as being like a cigarette and a shot of hundred proof that he is always craving.

One of the most powerful uses of simile can be found in Paul Simon’s classic “Bridge Over Troubled Water” (recorded by Simon and Garfunkel) when the lyric states that the singer will lay himself down like a bridge over troubled water.

In her self-penned song, “Red,” Taylor Swift uses simile when she sings that loving the person about whom she is singing is like driving a new Maserati down a dead-end street. In alternative rock band Death Cab for Cutie’s top-10 modern rock track “Crooked Teeth” (written by Benjamin Gibbard and Christopher Walla) the singer uses simile when he describes the state line that separates him from the one he loves as feeling like the Berlin Wall.

Successful use of metaphors and similes can be found in almost every musical genre and can provide unique, fresh angles to differentiate our lyrics.

Hyperbole can be defined as the use of exaggeration to emphasize and amplify an idea or an emotion. For example, instead of saying “you’re no good for me,” Britney Spears sang you’re “Toxic” (written by Cathy Dennis, Henrik Jonback, Christian Karlsson, and Pontus Winnberg).

In “Back to Black” (written by Mark Ronson and Amy Winehouse) Amy Winehouse sings that she died a hundred times. In Eminem’s hit featuring Rihanna, “Love the Way You Lie,” (written by Alexander Grant, Holly Hafermann and Eminem) the rapper states that there is a steel knife in his windpipe.

Similarly, in the Roberta Flack classic “Killing Me Softly” (also a hit by the Fugees) (written by Norman Gimbel and Charles Fox) the singer describes a song “killing her softly.” Of course, the song is not literally killing her, but this use of hyperbole is far more effective than if the singer had simply stated “It hurts me deeply to hear that song.”

While many lyrics use a conversational tone, others find success by using language that is richer, more flowery, more like poetry. Jason Isbell’s stunning GRAMMY-winning, self-written song “If We Were Vampires” uses language consistent with classic poetry to express that time spent with his lover is exceptionally precious because we are mortal, and it will come to an end.

The lyric of the Selena Gomez and Marshmello pop and rock hit “Wolves” (written by Brian Lee, Marshmello, Carl Austin Rosen, Alexandra Tamps, Andrew Wotman, Selena Gomez, and Louis Russell Bell) uses poetic language to express the idea, “I have waited so long and looked so hard to find you.” The opening stanza of “Wolves” draws listeners in with its intense, unique imagery and evocative sentence fragments. The singer states that there is a heavy blue in someone’s eyes. She continues that those eyes contain water and wine.

The chorus of “Wolves” describes the singer’s journey to find the love she hopes she has finally found. She sings that she ran through jungles, ran with wolves, went to dark alleys and saw the dark side of the moon on her quest. While we are not expected to believe that the singer literally did these things, the poetic language powerfully conveys the depth of her emotion.

Not every lyric has to be literal or make sense. Many of the late Leonard Cohen’s songs are steeped in symbolism. Cohen’s ubiquitous modern standard “Hallelujah” has been recorded by hundreds of artists and has been played at the Olympics, on American Idol and X-Factor, at countless weddings, funerals, and religious services, and even in the movie Shrek. The lyric alludes to biblical stories, music, love, sex, and more, and is open to interpretation. Yet, despite being ambiguous, when paired with Cohen’s exceptional melancholy melody, the song evokes powerful emotion.

When explaining the meaning of her #1 self-written hit “Black Horse & The Cherry Tree,” KT Tunstall stated that the lyric is about gambling, fate, listening to your heart, and having the strength to fight the darkness. My guess is that few, if any, listeners grasped that meaning, but they connected with the sound, the vocals, and the super-hooky melody and backing track.

In songs such as the Beatles’ “Lucy in the Sky with Diamonds,” (written by John Lennon and Sir Paul McCartney), Donovan’s “Mellow Yellow” (written by Donovan) and some others of the psychedelic era, the lyrics did not make sense, but contributed to the overall impression of taking the listeners on a sonic acid trip.

As evidenced by the iconic hits referenced above, songs with non-literal lyrics can be successful, but they typically rely more heavily on their melodies to engage listeners. Artists rarely record songs with abstract lyrics unless they write them themselves. It is interesting to note that few country songs include lyrics that are non-literal.

Note: Lyrics are not typically crafted by using one approach exclusively. A lyric might primarily use the technique of stating how the singer feels, but might incorporate one or more lines that include visual imagery.

Regardless of the techniques we employ, our lyrics need to differentiate themselves and jump out of the pack. We need to give our listeners compelling reasons to love our songs. Similarly, if we are hoping to have artists other than ourselves record our songs, we need to write lyrics that are stronger than the ones the artist and producers might write or co-write. By incorporating the tools and techniques described in this article, such as building on a fresh angle, using metaphor, simile, hyperbole, poetic language, or abstract imagery, we can write effective non-visual lyrics that connect with listeners.