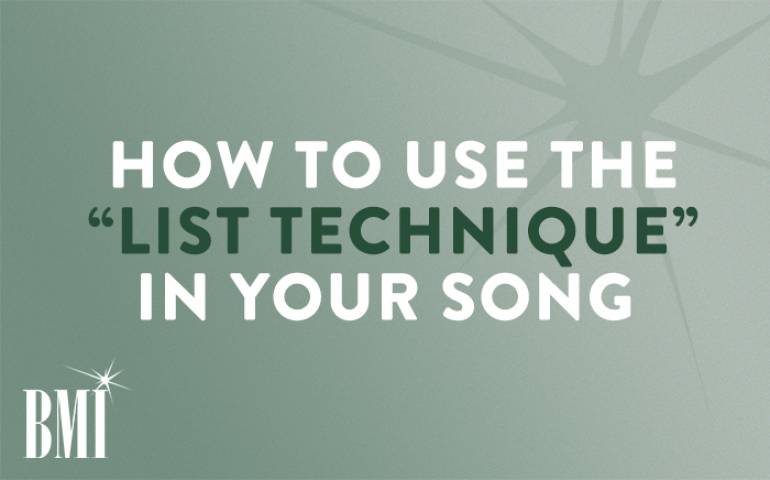 What do the songs in the list below have in common?

All the songs, as well as the aria, listed above include lyrics that were crafted using the list technique. The list technique is a means of crafting a lyric by including a list of lines that relate to—and lead the listener to—the title. Sometimes referred to as the laundry list technique, it can be a powerful tool to help make our titles pay off and feel satisfying.

The list technique can be used in any section of a song (i.e., verse, pre-chorus, chorus, or bridge), in part of a section, or in multiple sections of the same song. Most often, the list ends with the song’s title.

The list is typically approached one of two ways:

Create a list (i.e., of traits, actions, colors, names, or other subjects) in which the final item in the list being emphasized.

For instance, in the example below, titled “Your Loving Heart,” I list the things I like, followed by the thing I love:

The alternative is to list items that are the opposite of the final line, as in the example below, titled “When We’re Apart.”

Let’s see how this technique was used exceptionally well in the GRAMMY awarded Best American Roots Song, “If We Were Vampires” (performed by Jason Isbell and the 400 Unit, written by Jason Isbell).

Each line of the first verse lyric enumerates the things that are NOT the reason why each moment of the singer’s relationship is precious.

The subsequent chorus contrasts the thoughts listed in the verse by addressing the reasons each minute of the relation IS to be savored:

The first four lines of the second verse continue using the list technique, listing the things they would do if they were immortal.

IF we were vampires we would:

Note that the last half of the second verse does not use the list technique.
In some instances, a set-up line serves to provide a seamless connection between the list and the title. This is typically found in lists that are the opposite of the title.

Title: “I Can’t Stop Loving You”

It’s important to have the lines that comprise your list be fresh and original.

Now that you understand the list technique, try it yourself in the exercise that follows.

2) Create a list of lines that are the opposite of this title:

“I Still Need You”

This approach is not something you’ll want to use in every lyric. But it is an important technique to add to the “list” of tools in your proverbial toolbox.