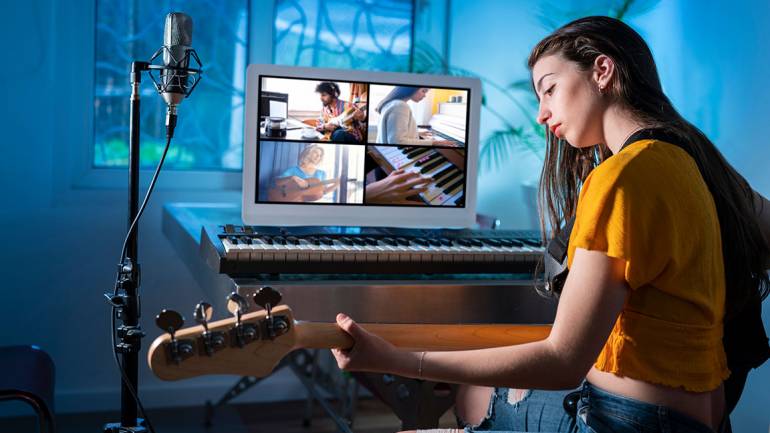 It’s become a ubiquitous image during these trying times: a screenful of sequestered musicians arranged in a Zoom-styled array of boxes, playing “together” in what appears to be a totally synchronized performance. While some may be better than others, these video happenings have been a source of sustenance for fans deprived of the live concert experience. And for musicians forced into hiatus, the ability to create an online ensemble has helped bands maintain momentum while keeping fingers and vocal cords limber during this prolonged period of isolation.

With my band’s 10th anniversary concert scuttled due to the pandemic, the idea of putting together such a performance piece seemed like a plausible alternative, especially since we’d just released a single to coincide with our milestone year. Years of YouTube concert clips aside, we’d never formally produced a video work of any kind—until now. Here’s how it went.

Getting started on the video part is easy enough—for equipment, each participant just needs a basic phone camera to record themselves, along with a second device for track playback. Videos can be shot in either portrait or landscape mode, and, ideally, should be rendered using a cross-platform file type (such as mp4). Because everyone may be squeezed into small boxes at times, be sure there’s adequate light when shooting. Try a number of takes, perhaps altering the background or camera angle, so that the production person has enough good material to work with.

Recording the audio requires a bit more advance planning. While it may seem like players are interacting in real time, most of us don’t have the internet bandwidth and computer firepower to support a consistent, lag-free hook up with a small army of people. Hence, these productions are more likely to be assembled from individually recorded segments, edited together to give the impression of an actual live performance.

This presents us with several options for getting the sound down:

“Live” quality. Relying on the audio from your phone’s video track eliminates the need for external mics and other recording apparatus. Bear in mind, though, that some smartphones are better than others at capturing sound, and even then, may be overwhelmed by louder sources such as drums, bass and amplified instruments. Accordingly, this approach might be better suited for smaller and/or acoustic configurations.

“Studio” quality. If want something a bit slicker, you might consider a dedicated recording system to augment your video. As discussed in a recent column about sending your tracks via file transfer, this assumes that everyone already has some kind of tracking platform on the premises (including the ability to properly mic vocals and instruments). Rather than using phone audio, in this scenario band members instead send back a separate sound file from their home recorder, which is subsequently synced to the video during the production stage.

Whichever route you choose, you’ll need to create a basic click track with instrumentation–even something as simple as an acoustic guitar with guide vocal and some audible percussion—that each band member can subsequently build upon.

Putting it All Together

When everyone is done with their clips, the files are zipped and then sent to the production coordinator via a file transfer platform. If you’re just using the embedded audio, all you need to do is line up the vids, so everyone is in sync. If the audio has been recorded to a separate device, you will first import the different tracks to your multitrack, then remix or EQ, adding compression or other sound processing if need be. The video producer then inserts the mixed audio, matches it with the existing click, and then arranges the various movie clips to taste.

Admittedly I came into this with only a modicum of video-production experience, and there would be more than a few learning curves along the way. But with a little patience (and a big assist from one of our tech-savvy bandmates), we were able to come up with a finished work that was actually fun to assemble, and hopefully enjoyable enough for our homebound loyalists.