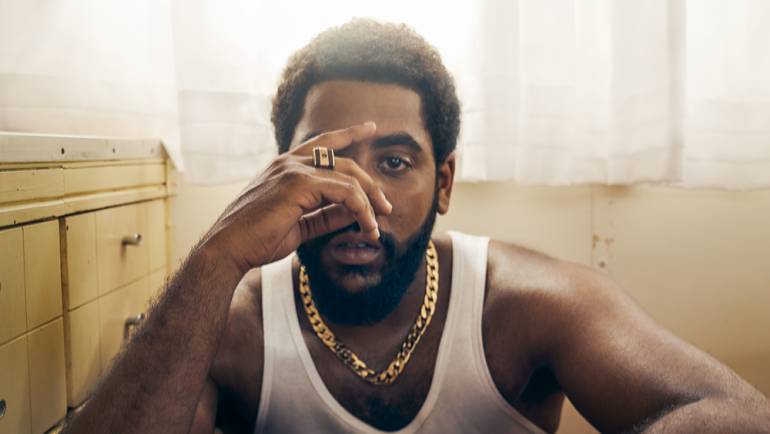 As an actor, Jharrel Jerome was already going places. A Bronx-born graduate of New York City’s revered Fiorello H. LaGuardia High School, Jerome kickstarted his professional career in acting upon landing a crucial supporting role in director Barry Jenkins’ 2016 indie drama Moonlight, which went on to win the Oscar for Best Picture. From there, another pivotal step was being cast in a part for Netflix’s 2019 miniseries When They See Us, a harrowing dramatic account of the Central Park jogger case that gripped New York City in 1989. Jerome’s stirring portrayal of the wrongly accused Korey Wise won him the Primetime Emmy Award for Outstanding Lead Actor in a Limited Series or Movie, the first African-Latino actor to ever receive the accolade. Later this year, he’ll be appearing in HBO’s adaptation of Ta-Nehisi Coates’ stage production of Between The World and Me.

But even while at the top of his game as an actor with a promising future, there is another side of Jharrel Jerome he is eager to showcase, and it’s a role he’s been preparing for years — that of a rapper and a songwriter. Since first experiencing old-school hip-hop as a teenager, Jerome’s been transfixed by the genre—it’s cool cadences, innovative sounds and narrative arcs. He just debuted a new single, “For Real,” this week, and it’s an assertive statement that establishes Jerome’s status as both a complex lyricist and gifted rapper, documenting his struggle to remain true to himself while dealing with his sudden fame.

BMI caught up with Jerome just as the new single was dropping to find out how he’s striking the balance and keeping it real.

In a very short while, you’ve made huge strides as an actor.  Are you excited to showcase this other side of yourself as a rapper and songwriter?

Absolutely. The strides I’ve made as an actor were unimaginable two years ago. In such a short amount of time, I’ve seen how much my life can change. Whether it’s for the better or for the worse, it’s taught me that I need to stay in control. And if I can have control over my own career, why not do everything my passions desire? I just hope people respect my music just as much as they respect my films.

Your breakout role as Korey Wise in last year’s Netflix mini-series, When They See Us, was hailed as a profound performance, gaining you wider recognition and earning you a prestigious Emmy award (the first Afro-Latino actor to do so). How has this experience changed your life?

It’s changed my life in every way. The way strangers look at me. The fact that I’m living in Los Angeles right now, distant from my family and closest friends. The idea that “fame” is even associated with my name is hard to adjust to. But in a positive light, my dreams have truly come true. I have a voice that is louder than I thought it’d ever be. And it’s now my job to cater to it correctly.

Which came first for you — music or acting? Which discipline do you feel most comfortable in?

Although I couldn’t choose between them, music came first. Long before I knew I wanted to act, I was already freestyle rapping and writing poetry. Music, rhythm, and hip-hop were all naturally taught to me at a very young age. BX is the birthplace of Hip-Hop. So when you’re from there, there’s this innate sense of love you have for the hip-hop culture regardless if you relate to it or not. Acting didn’t cross my mind until I was starting high school. But even when I began acting classes, I made sure to get better and better with the bars. Acting and music are one and the same to me. Improv is like free-styling. Creating a character is like creating a new cadence on the mic. And through both forms of art, I get to tell a story.

I couldn’t choose which discipline I feel more comfortable in. They both come with their unique challenges. In film, you’re trying to accurately convey a story that isn’t yours. In music, you’re trying to accurately convey YOUR story in a way that relates to others. Both are tricky things to do. But my passion fuels me enough to try and master both. I’ve got a long way to go.

What inspires you as a songwriter? Who would you cite as your influences?

Like a screenplay, a songwriter has the ability to paint images that tell a story. That’s where my love truly lies:Storytelling. Whether it’s through singing, acting, dancing, painting or whatever, I love a beautiful story that allows me to think differently. I know that not every song I create will have a perfect story, but as long as it’s my story, I’m good.

I grew up in love with old school hip-hop. My favorite artists were Slick Rick, A Tribe Called Quest, Jay Z , Gangstarr, LL Cool J, Nas, Big Pun, Lauryn Hill, Erykah Badu, OutKast and Eminem. If I had to cut it down, it’d be Slick Rick, Pun, and Eminem. They all told stories. At the same time, my mom introduced me to reggaeton, bachata, salsa, and merengue straight out the womb. So there’s a flavor in my voice that comes from that. Prince Royce and Romeo Santos are my favorite Latin artists.

How have you been handling these past few months during the pandemic? How have you stayed focused and creative?

I live by two words, it’s pretty simple. Stay private. Today everything is so public. Relationships, feelings, opinions etc. I see the beauty in it, but I see the curse in it just as well. After my life changed, I realized that I had the choice to indulge in the fame or take it slow and stick to my roots. I chose the latter. This year I’ve been away from my family. So it wasn’t easy staying sane. But I kept to myself and the very few people here in L.A. that I can truly call family. I’ve also been in the studio almost every night this year, mask on and everything. Being an artist is dope, ‘cause you can always create no matter what shuts down around you.

What’s next for Jharrel Jerome?

An Oscar, a GRAMMY, another Emmy, a Tony, a Pulitzer Prize, and a lunch with Denzel Washington. A man can dream can’t he? Lol

But seriously. I’ll be starring in Boots Riley’s new tv show, I Am A Virgo. I’ll be playing a 13-foot-tall black man from San Francisco. I’m also in a beautiful upcoming film called Concrete Cowboy directed by newcomer Ricky Staub. I’ll be acting alongside Caleb McLaughlin and Idris Elba.