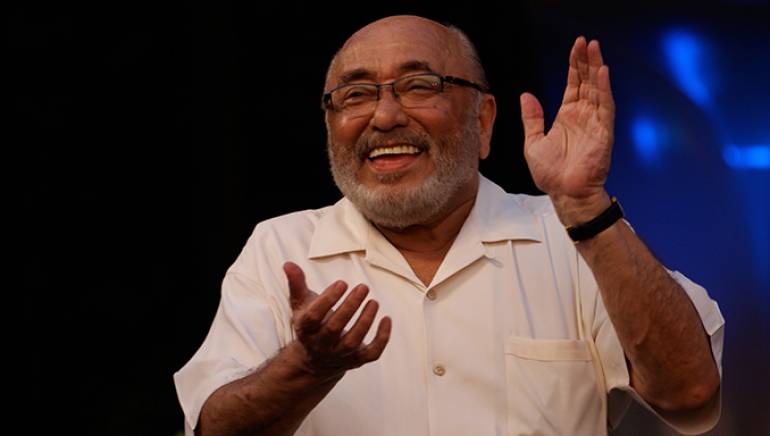 He may be 75, but Eddie Palmieri remains many things: still touring, still a pianist of legendary force, still funny.

2011 marked the golden anniversary for Palmieri’s seminal conjunto, or combo, La Perfecta. Awards were accordingly sprinkled throughout the nine-time Grammy winner’s year: BMI presented him a Certificate of Appreciation, and the summer brought an honorary DVD commemorating the Bronx-born pianist and bandleader’s half-century of contributions to Latin music. “It’s something spectacular,” he calls the tribute. “The music basically recaps my compositions over the years.”

In many ways, those offerings challenged what Latin jazz could be. Palmieri’s legacy is a varied one. In the ’80s and ’90s, he explored more expansive solo material; the early ’70s held impressive, experimental funk-fusions. Uniting it all was the enduring bedrock of Antillean rhythm, montuno motifs, and fervor of the salsa tradition Palmieri and La Perfecta helped birth in the ’60s.

Formed in 1961, Palmieri’s combo was notable for expansive hits like “Azucar,” and for merging trombones and flutes where trumpets and strings had traditionally sufficed. It was termed trombanga by his older brother, the late pianist and bandleader Charlie Palmieri. “My brother was my mentor,” says Palmieri. “He would bring most of the music into the household so I could listen to the big bands of that era.”

As kids, they competed in local competitions — “Usually, we won” — and by age 12 Eddie was playing timbales in his uncles’ professional bands. As piano became his cause, he graduated to mambo, cha cha cha and charanga ensembles, backing Tito Rodríguez. Decades later, he recalls childhood dreams long since realized and heroes with whom his incredible art is now forever linked. “My goal was to become a dance orchestra leader,” Palmieri says. “Like the great bands of Machito, Tito Rodríguez and Tito Puente.”