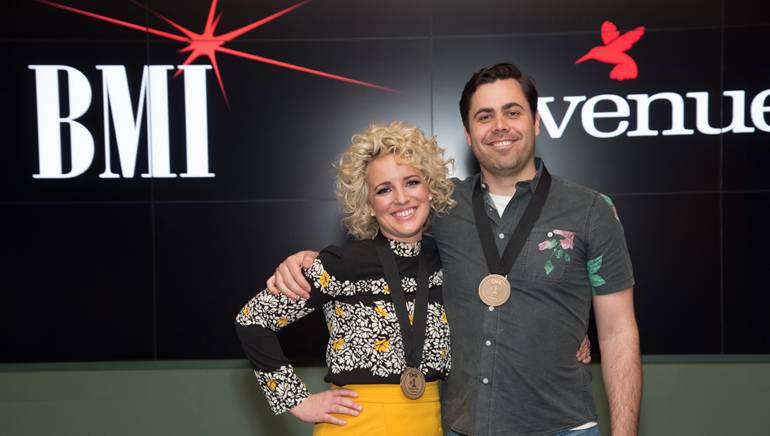 BMI songwriters Cam and Tyler Johnson pose post-party with their #1 medallions from the CMA.

For 63 years, BMI has celebrated the music of BMI country legends like Dean Dillon, Bobby Braddock, Dolly Parton, Kris Kristofferson, Vince Gill, Mac Davis, and many others, and honored the writers of the top country songs played on radio and TV at the Company’s annual BMI Country Awards. But for the last four decades, BMI has also celebrated country chart-toppers with hot-ticket #1 parties on a nearly biweekly basis, honoring the scribes behind the biggest hits on the country charts. Take songs like the poignant “Bless the Broken Road,” written by BMI writers Marcus Hummon, Bobby Boyd and Jeff Hanna and recorded by Rascal Flatts; Miranda Lambert’s reminiscently real “Automatic,’ penned by Lambert, Nicolle Galyon and Natalie Hemby; and the hilarious “How Do You Like Me Now?,” by Toby Keith and Chuck Cannon, recorded by Keith. Songs like these don’t come along every day, and on March 1, BMI helped celebrate yet another track that made chart history: newcomer Cam’s “Burning House,” written by the rising superstar, along with BMI scribes GRAMMY winner Jeff Bhasker (whose collaborations include Bruno Mars, Beyoncé, Fun., as well as the Rolling Stones), and two-time Album of the Year GRAMMY nominee Tyler Johnson, who has worked with Ed Sheeran, OneRepublic, Taylor Swift, and Mikky Ekko, among others.

The certified platinum “Burning House” ignited the charts and ranked #1 on Rolling Stone Country’s “25 Best Country Songs of 2015,” taking Cam as an artist with it, although the California native has successfully written for others including BMI affiliate Miley Cyrus. Here, BMI asked the GRAMMY-nominated and 2016 most ACM-nominated female artist three questions to sum up her whirlwind ride:

BMI: “Tell us one word that described you before you became this successful.”

BMI: “Tell us one word that describes you now.”

BMI: “What’s the biggest difference in your music from when you started out ‘til now?”

Cam: “It’s getting better. The more I learn the better it gets.”

And about “Burning House,” Cam said, “Every night there’s a stadium full of people with their lights on their phones, holding ‘em up – there’s like a sea of stars and they’re all screaming every single word to this song.  And it’s just surreal, its wild and I feel like the country music community was kind of rooting for this song, and that’s really endearing and it feels really nice to kind of have everybody excited about, ya know, something that’s a ballad that probably wasn’t everyone’s first choice for a summer hit but it just, yeah everyone kind of cheered it on. So that feels really good.”

With the #1 party honoring “Burning House” in full swing at BMI’s Nashville office, the writers, publishers (Creative Nation, Pulse, and Sony ATV) and label executives from Arista Nashville graciously accepted BMI’s signature platinum engraved #1 cups. As is tradition for first time country #1s, Cam and Tyler also received brand new Epiphone J-200 guitars, complete with the BMI logo, from Vice President Jody Williams, the BMI host of the event, in appreciation of the song, the writers and all the contributors behind the wildfire success of “Burning House.”

“BMI has celebrated thousands of its writers over the years, but every time it’s about something new and that’s what makes a great song,” said Executive Director Bradley Collins, who arranges the #1 celebrations. “Burning House” broke out from the rest by its uniqueness and honesty.”

As a sponsor of all of BMI’s #1 parties, Music City’s Avenue Bank makes a donation to a charity of the writer’s choice at each event. This time it was the American Red Cross. Congratulations to all!