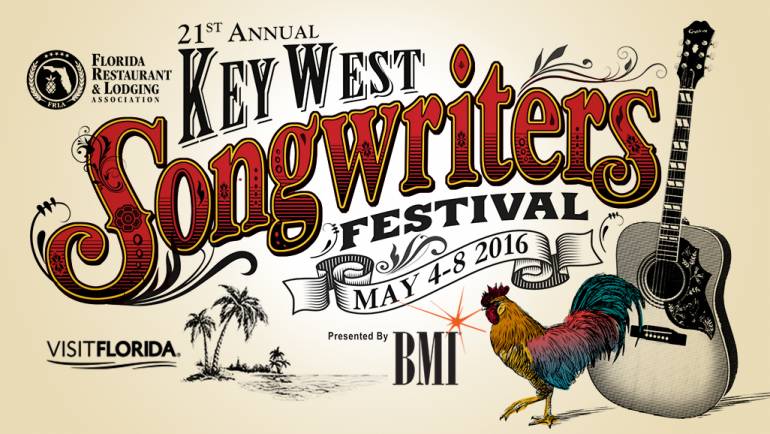 BMI is pleased to announce the initial lineup for the 21st Annual Florida Restaurant and Lodging Association’s Key West Songwriters Festival, presented by BMI. Set for May 4-8, 2016, the festival will feature top country hitmakers alongside up-and-coming talent in the most iconic venues of beautiful Key West.

“This is a great opportunity for us to bring our songwriters and licensees together for five days of fun in the sun and once-in-a-lifetime performances,” says Mark Mason, BMI’s Executive Director of Writer-Publisher Relations. “Budding songwriter relationships and hit songs have come out of the Key West Songwriters Festival for 21 years now.”

“The Key West Songwriters Festival brings the best country songwriters to the most festive island venues in the southernmost states,” says Carol Dover, President and CEO of the Florida Restaurant and Lodging Association. “We are thrilled to bring such a diverse talent lineup to such a lively city as Key West, giving festival attendees the chance to have a unique music festival experience.”

Attendees will have the chance to check out more than 200 songwriters playing more than 50 shows, free of charge. The SunTrust Kickoff Concert will feature the Rhett Akins Band, performing on the scenic Ocean Key Resort Sunset Pier, followed by free daily stages at the Southernmost Beach Resort, sunset show on the Pier House Resort beach, and a Main Stage Duval Street Concert featuring RCA Nashville recording artist Jake Owen. Shows will also take place at the historic Sloppy Joe’s, as well as the Green Parrot Bar, with live streaming from Jimmy Buffet’s Margaritaville. Other shows include the NSAI “Bluebird at Blue Heaven” show, HD Radio’s late night jams with Guthrie Trapp and the Mulekickers at the Smokin’ Tuna Saloon, and a closing concert at the historic Casa Marina Resort.

Ticketed shows for the festival will include theatre shows at the San Carlos Institute, the Tropic Cinema, the Key West Theater, the Studios of Key West and Sunset Sail Shows aboard a Fury Water Adventures catamaran. In addition, award-winning songwriter Robert Earl Keen will host two Bloody Mary Brunch shows at the Smokin’ Tuna Saloon, in partnership with Texas Heritage Songwriters Association.

Proceeds from the festival will benefit the BMI Foundation, a nonprofit organization that since 1985, has supported the creation, performance, and study of music through awards, scholarships, grants and commissions. Sponsors include SunTrust Bank, Texas Roadhouse, HD Radio, Epiphone and the Texas Heritage Songwriters Association. Tickets will be on sale mid-March. For a complete listing of sponsoring hotels, local businesses, participating songwriters and more, visit www.keywestsongwritersfestival.com.