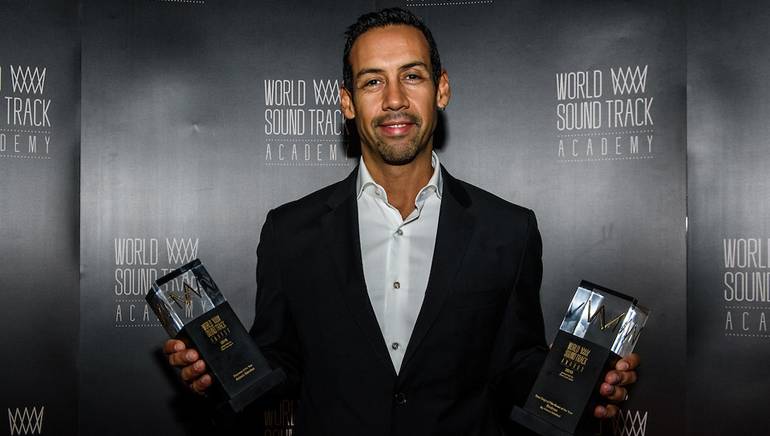 BMI composer Antonio Sanchez honored with Best Original Film Score of the Year, as well as Discovery of the Year award, at the 15th World Soundtrack Awards. Photo: Jerroen Willems

BMI composers Antonio Sanchez, Alan Silvestri and George Fenton all received high honors at the 15th World Soundtrack Awards, held recently in Ghent. Sanchez was recognized with Best Original Film Score of the Year, as well as Discovery of the Year, for his mesmerizing music in Birdman: Or (The Unexpected Virtue of Ignorance). In a tribute to Alan Silvestri, who was the guest of honor at the awards, Dirk Brossé conducted the Brussels Philharmonic and the Flemish Radio Choir in several selections of Sivestri’s work, including Back to the Future and Forrest Gump. Capping off the concert, Silvestri himself conducted the first live performance by an orchestra of his work The Walk. In addition to these prestigious honors, during another event honoring British composers, BMI composer George Fenton was presented with a lifetime achievement award for his exquisite body of work.

Prior to the awards ceremony, BMI’s Vice President, Film/TV Relations, Doreen Ringer-Ross, also supported the event by participating on a panel discussion entitled “How do composers position/market themselves in the film music industry?” The informative panel provided aspiring composers with an inside view of how working composers collaborate and market themselves to filmmakers, as well how to best connect with a producer or director’s thoughts about music for their film project. Moderated by Ray Costa, additional panel participants included Stephen Warbeck, Andrew Steggal, and Peter Gregson.