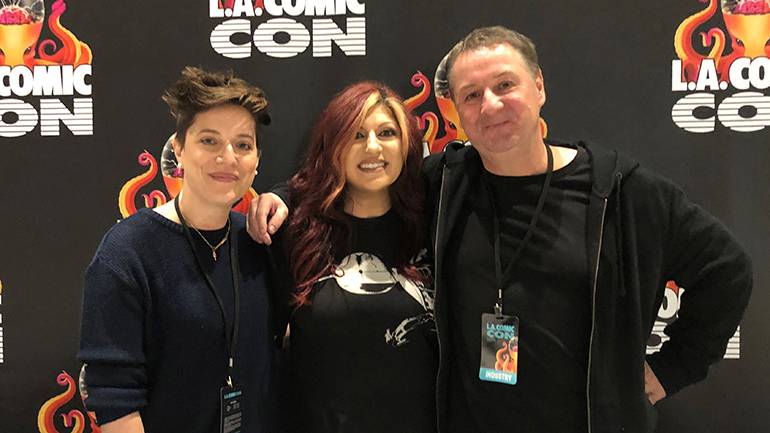 BMI’s Anne Cecere (center) is joined for a photo by BMI composers Emily Rice and John Murphy at “Behind the Screams: Music for Horror and Thrillers.”

Los Angeles Comic Con was the place to be to hear behind the scenes insights from BMI affiliates on many fan favorites, including Batman and Space Station Earth, as well as horror, thrillers, and to even things out, box office smash musicals that took the stage at The Hollywood Bowl. BMI’s Senior Director- Creative, Film, TV & Visual Media, Anne Cecere was on hand at each event to support the BMI composers featured. They included Kristopher Carter, Lolita Ritmanis and Michael McCuistion (a.k.a. the Dynamic Partners) at “A Musical History of Batman,” and award-winning British/French composer Ilan Eshkeri at the panel on IIan Eshkeri’s Space Station Earth. In addition, BMI composers John Murphy (28 Days Later) and Emily Rice (The I-Land) added their experiences to “Behind the Screams: Music for Horror and Thrillers,” while director/producer Richard Kraft pulled back the curtain on the process of mounting live-to-film events like The Little Mermaid and Beauty and the Beast, with music by BMI composer Alan Menken, The Nightmare Before Christmas, with music by Danny Elfman, La La Land, with music by Justin Hurwitz, and Willy Wonka and the Chocolate Factory, with music by Leslie Bricusse and Anthony Newley, during “Behind the Scenes of Celebrating Movie Musicals.”  All of the panels were produced by White Bear PR.