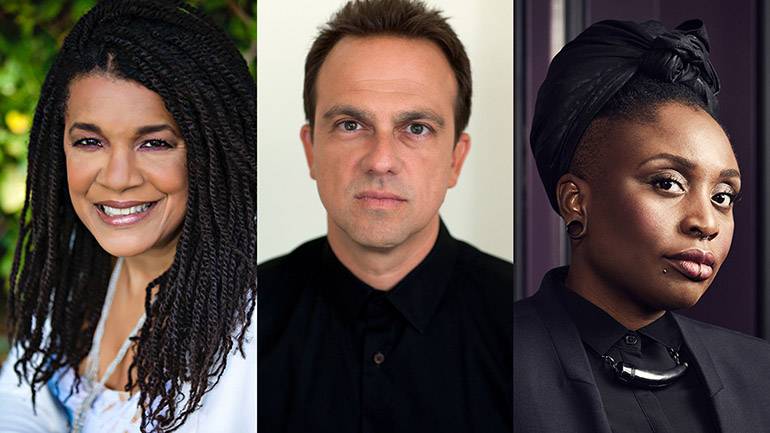 BMI is excited to present Tribeca Talks: The Art and Business of Scoring for Film, TV & Visual Media, a panel that will be included as part of the Tribeca Festival’s Music Lounge, on Saturday, June 11 at 5:30PM at Baby’s All Right in Brooklyn. The panel will be moderated by BMI’s Senior VP, Creative Alex Flores and will feature leading composers Kathryn Bostic, Carlos Rafael Rivera and Tamar-kali, who will dive into the creative process and the business side of composing. The panelists will also discuss what it takes to get your music heard, the relationship between directors and composers, and what inspires them to create every day. Free tickets for the event are available here.

The evening will also consist of live conversations and performances by duendita and Onyx Collective as part of Tribeca’s Music Lounge programming. Additionally, BMI has partnered with Tribeca Festival to present their Music Lounge as part of their 2022 season alongside Diageo whiskey brands, UnitedMasters, and Pitchfork. The Music Lounge will feature live music and industry panels from Friday, June 10 through Sunday, June 12 at Baby’s All Right in Williamsburg, Brooklyn. Complete event and ticketing information can be found here.

“BMI is thrilled to be a part of the Tribeca Festival’s Music Lounge,” said BMI SVP, Creative Alex Flores. “Many of our composers have music in films premiering at Tribeca this year, and we’re excited to bring them together for what promises to be an enlightening conversation and an insider’s look at what it takes to score in film, TV, and visual media.”

ABOUT THE COMPOSER PANELISTS:

KATHRYN BOSTIC:
Kathryn Bostic is an Emmy-nominated and award-winning composer and artist known for her work on films, TV, and theater. She is a recipient of numerous fellowships and awards including the Sundance Institute/Time Warner Fellowship, Sundance Fellowship for Feature Film Scoring, Sundance/Skywalker Documentary Film Scoring, BMI Conducting Fellowship, and Best Music in Film by the African American Film Critics Association. In 2016, she became the first African American female score composer to join the Academy of Motion Pictures Arts and Sciences. Bostic has music in three films premiering at Tribeca including Lowndes County and the Road to Black Power, The Rebellious Life of Mrs. Rosa Parks and LIFT.

CARLOS RAFAEL RIVERA:
Carlos Rafael Rivera is a GRAMMY and two-time Emmy-winning composer, whose career has spanned several genres of the music industry. His work for Film and TV includes scores for Netflix’s Godless, for which he received a Primetime Emmy, his award-winning score for The Queen’s Gambit, for which he won his second Primetime Emmy and first Grammy Award, Universal Pictures’ A Walk Among the Tombstones, the hit TV show Hacks for HBO Max, Just Beyond for Disney+, as well as the upcoming La Reina Del Sur 3 for Telemundo. The World Soundtrack Awards awarded Rivera TV Composer of the Year in 2021. His music can currently be heard on season two of Hacks.

TAMAR-KALI:
Brooklyn born and bred artist Tamar-kali is a second-generation musician with roots in the coastal Sea Islands of South Carolina. As a composer she has defied boundaries to craft her own unique alternative sound, and in 2017, she made an equally impressive debut as a film score composer. Her score for Dee Rees’ Oscar-nominated Mudbound, garnered her the World Soundtrack Academy’s 2018 Discovery of the Year Award with the work classified by Indiewire as one of the 25 Best Film Scores of the 21st Century. 2019 was also a hallmark year for her work as a composer. In addition to debuting her first symphonic commission, she scored four films total; three of which were featured at the Sundance Film Festival 2020. They include Dee Ree’s The Last Thing He Wanted, Kitty Green’s The Assistant and Josephine Decker’s psychological drama Shirley; the soundtrack of which was named The Guardian’s Contemporary Album of the Month in June 2020. The fourth film was the documentary John Lewis: Good Trouble. In 2022, Tamar-kali also debuted a digital short commission with LA Opera titled We Told These Truths, featuring imagery directed by Dream Hampton. Her music is featured in After Sherman premiering at this year’s Tribeca Festival.

In addition to these three stellar composers, BMI is proud to name many other of our immensely talented composers who will also have music featured in films at Tribeca. They are:

Congratulations to all. Join the conversation by following us @BMI using #BMINYC!