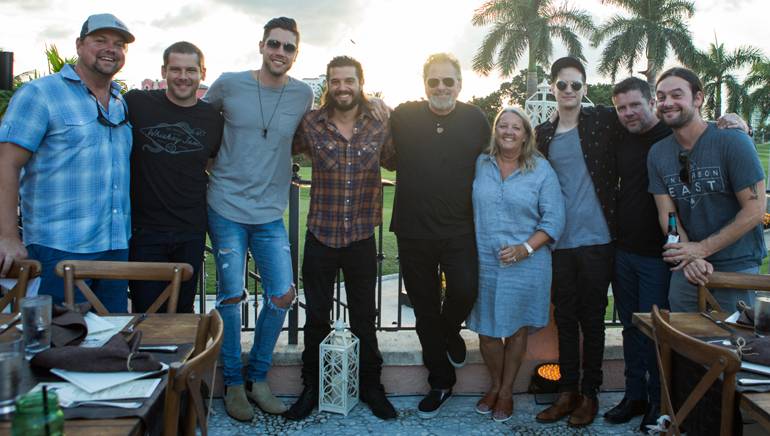 BMI and the Boca Raton Resort & Beach Club launched the inaugural New Sounds of Nashville experience this Labor Day weekend in South Florida with a series of exclusive events and writing camps. Designed to be an intimate, weekend-long experience that highlights the journey from writing the song to a smash radio hit, The New Sounds of Nashville featured four unique events showcasing chart-topping songwriters as well as the next wave of talent hailing from Music City. The event officially launched last Wednesday (Aug 29) with a writer’s retreat curated by Warner-Chappell.

The public-facing portion of the event began Friday night with two sold-out shows. The first, a Bourbon Social, featured a gourmet four-course meal, specialty bourbon pairings and performances from hit songwriters Wendell Mobley, Lee Thomas Miller and newcomer Trea Landon. Mobley set the bar high for the weekend, kicking off with a gripping rendition of his “I Know You Won’t,” followed by Miller’s charming “I’m Still a Guy.”

Later that evening, BMI’s renowned How I Wrote That Song series took place just down the hall with writer-round style performances from hitmakers Tim Nichols, Liz Rose, BMI Icon Bob DiPiero, Phil Barton, Aaron Raitiere and Warner Music Nashville recording artist William Michael Morgan. Cumulatively, the tunesmiths have earned an impressive number of GRAMMYs and Number One hits, and the evening’s lineup included many crowd-favorites such as Rose’s “White Horse,” Nichols’ “Live Like You Were Dying,” DiPiero’s “Southern Voice” and many more.

Saturday night, resort members packed out a private Smokes, Brews and BBQ dinner and show, complete with a “wall” of bacon, seemingly endless amounts of barbeque and a serenade from Bob DiPiero, Randy Montana, Corey Crowder, and Ben Burgess. DiPiero’s high-energy “Gone” was a massive hit amongst guests as well as Burgess’ “Whiskey Glasses” and Montana’s “Houston, We’ve Got a Problem.”

The weekend culminated with the sold out End of Summer Celebration Lobster Bash. With over 500 guests in attendance, Warner Music Nashville recording artist RaeLynn warmed up the crowd with a set that included her hit “God Made Girls” as well as “Tailgate,” “Queens Don’t,” and “Love Triangle” from her current album WildHorse. Curb recording artist Rodney Atkins headlined the event and got the crowd on their feet with a full-band set. Atkins treated the resort members to a slew of his top hits, including “Watching You,” “Farmer’s Daughter,” “If You’re Going Through Hell (Before the Devil Even Knows)” and “Take A Back Road.”