Posted in The Weekly on February 18, 2020 by Cliff Goldmacher 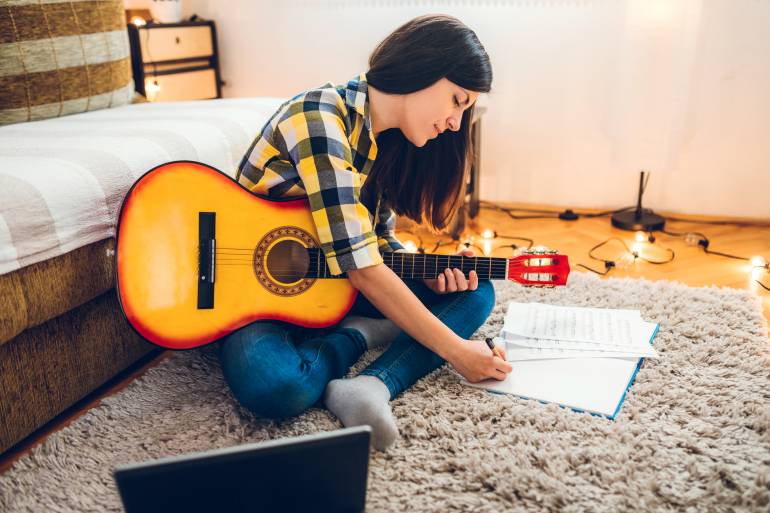 If you want to get better at writing songs, “Just keep writing.” This is one of those pieces of advice that we hear again and again as songwriters. And the reason we hear it so often is because of how spot on the advice is. The more you write the more you understand not only the nuts and bolts of songwriting but also your own songwriting process, which is the key to consistently strong songs. But while it’s simple to say, “just keep writing,” this is also one of the hardest things to do consistently. I thought I’d give you three ways to keep yourself writing songs day after day, year after year, until you truly know and understand the process like the expert you aspire to be.

Finish your songs and move on.
Part of what makes it difficult to keep putting new songs into the world is that it’s often hard to know when a song is done. There is always the temptation to keep tweaking and fixing a song to the point where you lose any perspective on whether the new changes are improving the song or taking you farther away from your original intention. The more you allow yourself to accept that not all songs will be perfect and that it’s enough to know you’ve done your best, the easier it will be to call a song done and move on to the next one. Being less “precious” about our creations is the hallmark of experience and professionalism. It’s also highly motivating to look back at a catalog full of songs. So, when you feel like you’ve achieved your goal of expressing yourself in a particular song, move on to the next one.

Revisit old songs and mine them for spare parts.
Given that there is no way that every song we write will accurately hit the mark, sometimes the best we can do is to take the best parts of the songs that don’t quite work and use them as parts of new songs that hopefully will. Whether it’s old songs that you’ve finished but never really loved or just pieces of songs that you never fully developed, make a habit of going back to these misfit toys and seeing if there aren’t elements that might spark new songs or ideas. As much as you shouldn’t dwell on the songs that aren’t quite up to par, make a habit of checking back from time to time to see if they don’t inspire something new and great.

Don’t worry so much about the big picture. Just write.
Part of the reason getting up to write day after day feels so daunting is because trying to create a big catalog of songs feels overwhelming. My recommendation would be that instead of worrying about your catalog (the big picture), just worry about making sure you’re writing a little every day. Writing doesn’t have to be done in huge, heroic chunks of time, it can be done in consistent, smaller moments that add up over the course of a month or year or even years. Just write and one day you’ll look up and you’ll have a catalog of hundreds of songs. Just put one metaphorical foot in front of the other and you’ll get there.

Waiting around for inspiration is unequivocally NOT the way to hone your craft. Being stubbornly focused on writing every day is a much better and time-tested approach. Hopefully the above tips will give you the perspective and pointers you need to “just keep writing.”

Cliff Goldmacher is a songwriter, music producer and educator with recording studios in Nashville, TN and Sonoma, CA. Through his studios, Cliff provides songwriters outside of Nashville with virtual, live access to Nashville’s best session musicians and demo singers for their songwriting demos, find out more.  Download Cliff’s FREE tip sheet “A Dozen Quick Fixes To Instantly Improve Your Songs.”