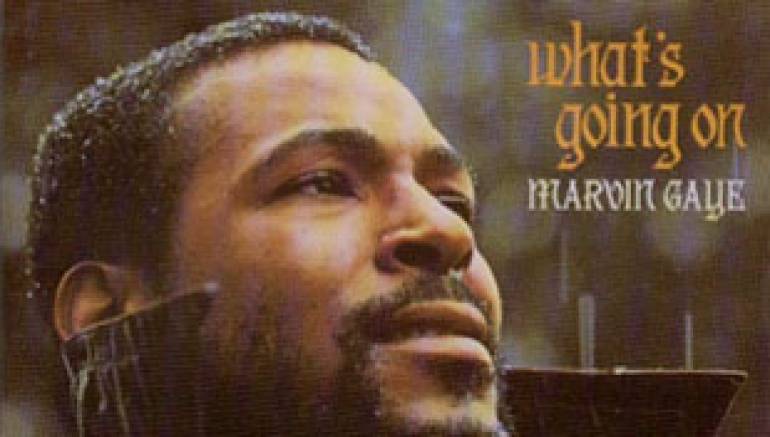 At the end of the ‘60s, multi-talented singer-songwriter Marvin Gaye had everything a pop star could ask for: financial clout, crossover appeal, even a potential career in film. His 1968 hit “I Heard It Through the Grapevine” had spent seven weeks at No. 1, becoming the second biggest single of that year.

But as the ‘70s unfolded, Gaye was a dour man. Angered by the widening war in Vietnam, in early 1970 Gaye went to Motown boss Berry Gordy and announced that he wanted to record an album comprised of songs with a political edge. Gordy, who had little use for any kind of topical material, flatly refused. But Gaye was a man on a mission, and his vision ultimately formed the basis for 1971’s landmark What’s Going On, a creative and commercial triumph and one of the greatest collections ever attempted by a popular artist.

It was an outsider - the Four Tops’ Renaldo “Obie” Benson - who arrived with the song that would get the ball rolling. Co-written with Al Cleveland and inspired by the political unrest then dividing the nation, “What’s Going On” was recorded in Motown’s Studio A “Snakepit” room just weeks after the campus killings at Kent State and Jackson State, and featured session veterans Eddie “Bongo” Brown and bass ace James Jamerson, with Gaye filling in on keyboards. Evocative, timely and thoughtful, “What’s Going On” was unlike anything Gaye had ever attempted - and, above all, was in direct violation of Gordy’s no-politics edict. Upon hearing the finished master, Gordy told Gaye point blank that he wouldn’t release the song. Gaye stormed out, and over the next several months composed an entire cycle of songs that, like “What’s Going On,” addressed a slate of political, environmental and social concerns. With the tunes rough sketched but not yet committed to tape, Gaye retreated to his Detroit estate and waited for Gordy to change his mind.

The impasse lasted until late January 1971, when Motown’s head of sales, Barney Ales, decided to take matters into his own hands and released “What’s Going On” as a single. Ales’ instincts were correct: by March, “What’s Going On” stood at Number Two. Weeks later, Gordy scheduled a meeting with Gaye.

“Berry came to Marvin and said, ‘Fine, you can have your album - you’ve got 30 days to get it done,’” says Harry Weinger, producer and vice president of a&r for Universal Music Enterprises, who supervised a double-disc reissue of WGO in 2001. “To which Marvin said, ‘No problem.’ Which was a bluff - because at that point, he hadn’t recorded a thing.”

He wouldn’t need a month. In just two-weeks’ time - March 17 through March 30 - Gaye and his sidemen delivered as promised. “The rhythm tracks were pretty much covered in three days,” notes Weinger, “and over the next 10 days Marvin did the overdubs.” Working spontaneously, Gaye recorded a sea of reverberant vocal and percussion tracks, using Motown’s attic echo chamber to great effect. On a whim, Gaye asked engineers Ken Sands and Cal Harris to stitch together each multi-track final take into one cohesive unit, then had arranger David Van DePitte add strings and horn overdubs to the entire master mix. The experiment worked beautifully.

Other flourishes occurred purely by accident. “Marvin had recorded two different lead-vocal tracks an octave apart,” says Weinger. “At one point Sands inadvertently played both tracks simultaneously in mono, and when Marvin heard them one on top of the other, he exclaimed, ‘That’s it! That’s how we’ll do it!’ When we put on an early mix of the song, we found that he’d originally placed one voice on the left channel and the other on the right—completely separated. It was absolutely fascinating.”

Mixing for What’s Going On was finished by April 5, but Gaye wasn’t yet ready to unleash his masterpiece. While filming Chrome and Hot Leather in Los Angeles, Gaye suddenly had the master tapes flown in from Detroit, and in 48 hours he added new overdubs and then re-mixed the entire album from scratch. “That was on May 6,” says Weinger. “Two weeks later, it was out.”

Its impact on the pop-music world was immediate. By year’s end, What’s Going On had spawned three Top 10 hits (“What’s Going On,” “Mercy Mercy Me (The Ecology)” and “Inner City Blues (Make Me Wanna Holler)”) and spawned an entire school of socially conscious soul. The last major album recorded at Detroit’s original “Hitsville USA” studio on 2648 West Grand Boulevard, What’s Going On left an indelible imprint on the men who had helped Gaye achieve his artistic goal.

“James Jamerson was a guy who recorded day in and day out,” notes Weinger. “But the day he came home from working on ‘What’s Going On,’ he went up to his wife and said, ‘Honey, I just cut a classic.’ That says it all.”