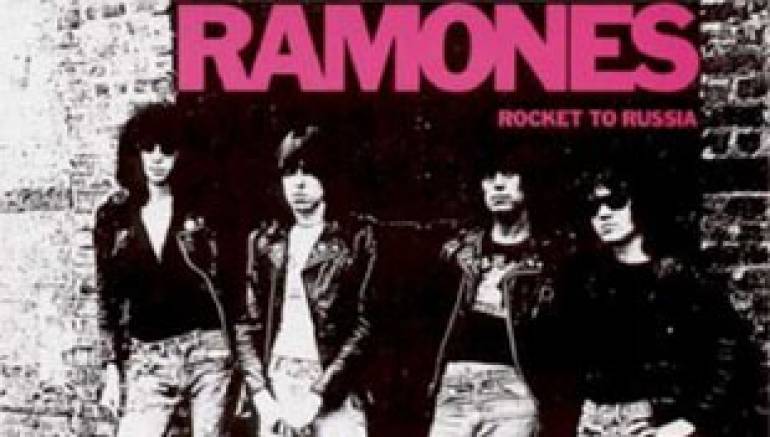 At the end of a turbulent Big Apple summer of 1977 marked by a garbage strike, a massive blackout and a ritualistic murderer who took orders from a dog, the Ramones, a clad-in-black rock quartet from Queens who all answered to the same last name, entered New York’s Mediasound Studio to begin work on a third album for Sire Records, Rocket to Russia. A triumphant tour of the U.K. the previous year had established the Ramones (guitarist Johnny, vocalist Joey, bassist Dee Dee and original drummer Tommy) as the leading purveyors of punk and the first palpable response to the effete perfectionism of ‘70s rock. For the Ramones and the rest of punk-rock nation, 1977 was a watershed year, one that included pivotal works like the Dead Boys’ Young Loud & Snotty and the Sex Pistols’ infamous Never Mind the ######## Here’s the Sex Pistols. While Boys/Pistols frontmen Stiv Bators and Johnny Rotten personified the most abrasive elements of the genre, on stage and in the studio the Ramones’ weapon-of-choice was the loud, fast (and barely) two-minute pop song.

Hoping to catch the last rays of summer, in late August the band prepared a new single, “Rockaway Beach,” Dee Dee Ramone’s ode to a favored seaside hangout. Supported by a volley of monstrously distorted barre chords, “Rockaway Beach,” like its predecessor, “Sheena is a Punk Rocker,” was in the tradition of the best Queens-bred pop, a kissing cousin to the sound and spirit of the Shangri-Las (who, ironically, launched a comeback that summer at the Bowery’s punk haven, CBGB). Though it failed to crack the Top 40, at No. 66 “Rockaway Beach” became the first significant single from a band that had but one mission: to give the coke-sniffing rock establishment a long overdue smack in the face.

Despite the overseas success of songs like “Blitzkrieg Bop” and “Pinhead” (both building-blocks for an entire generation of British punkers), domestic record sales remained sluggish. “Right before we went in to do Rocket To Russia, Johnny played me a copy of the Pistols’ ‘God Save The Queen,’” recalls Ed Stasium, a guitarist-turned-studio engineer who’d arrived in time to help the band record its second effort, the Ramones Leave Home. “He knew the Pistols had basically copied their sound from the Ramones - and he wanted to prove that the Ramones were capable of doing something a whole lot better.”

In an effort to capture the full-tilt energy of the band’s rhythm section once and for all, the crew abandoned New York’s ultra-dry Sundragon Studios and relocated to W. 57th Street and the abundantly ambient Mediasound, formerly the site of the Manhattan Baptist Church and, by 1977, one of Manhattan’s most favored recording sites.

“Media was an amazing place-it was huge,” says Stasium. “They kept the tall ceilings from when it was the church, and they must have been about 130 feet high. And you could get an absolutely killer drum sound in there, it was the best place in all of New York for that.”

Working with producer Roy Thomas Baker several years earlier had taught Stasium the importance of capturing the sound of the room. “I’d been accustomed to tight-miking everything, you know, pad up the walls, pad up the drums. But then I went to work with Roy who said, ‘Hey, we need some room sound in here!’ And he pulled the mic back 20 feet from the drums. So when I got to do Rocket to Russia, I still had the drums tight-miked, but it was also the first time I’d really miked up the room, using some 87’s and recorded to two separate tracks in stereo.”

That tight/ambient combo proved positively explosive on RTR‘s opening salvo of “Cretin Hop” and “Rockaway Beach.” “We had Tommy playing wide open in the middle of the room, I just baffled off Johnny’s amplifiers and put Dee Dee in a room in the back down by the bathroom.”

Unlike the Ramones’ wham-bam first two efforts, Rocket to Russia was an uncharacteristically detailed affair that derived its massive sound from piles of overdubbed guitar tracks. “Where Ramones Leave Home had been done very quickly and without hardly any pre-production at all,” says Stasium, “Rocket to Russia was where we really started going for a much more streamlined sound. We had all kinds of guitar sounds - acoustic, clean, distorted -the thing is, we still wanted it all to sound live! ‘Rockaway Beach,’ ‘Sheena is a Punk Rocker,’ it’s not like there were guitars split dead left and right, but there was always at least another guitar under there, just to thicken it, to add a little extra spiff to it.” When all else failed, says Stasium, “John just turned all of the knobs on his Marshall to 10.”

Unfortunately, radio programmers fixated on the supple sounds of the Eagles and Fleetwood Mac weren’t about to give an inch to a band of four-chord scrubs from the boroughs. Though at No. 49 Rocket to Russia became the Ramones’ most commercially successful album to date, it was hardly the major breakthrough the group had been hoping for. But in the years that followed, bands ranging from contemporaries like the Cars to latter-day punks like Green Day rode all the way to the bank on a sound perfected during that summer of ‘77 by Johnny, Joey, Dee Dee and Tommy.