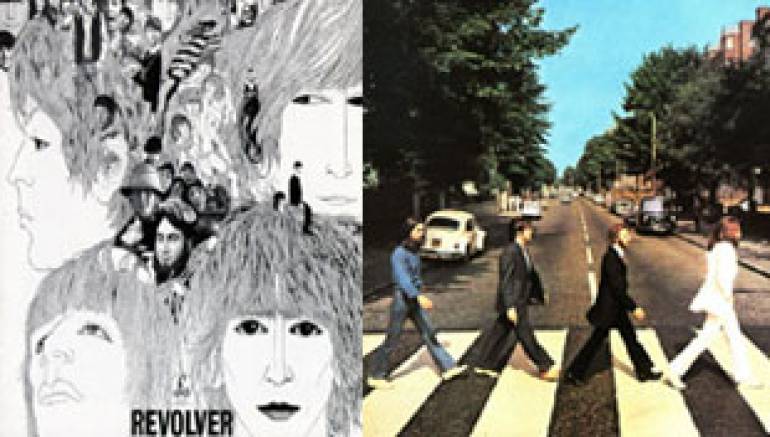 Without a doubt, the most compelling statistic in Fab Four folklore is the sheer speed with which John Lennon, Paul McCartney, George Harrison and Ringo Starr arrived, conquered, compiled and then fled, shedding their stylistic skin with each and every album, often many times in a single year.

How fast were they? By comparison, three years in the life of a modern pop artist means nothing; in Beatle years, it meant the difference between “I Want to Hold Your Hand” and “Strawberry Fields,” “From Me to You” and “Paperback Writer,” “She Loves You” and “She Said, She Said.”

The period that followed the group’s 1962 debut hit “Love Me Do” was marked by enormous advances in the world of recording. The Beatles both benefited from and helped inspire many of those changes, and in the process created a collection of works that remains among the finest in the annals of pop music.

Two of those efforts - Revolver, issued at the halfway mark of the band’s career; and Abbey Road, the group’s swan song - trace the Fabs’ creative metamorphosis from the pre-self-consciousness of Sgt. Pepper’s Lonely Hearts Club Band, to their eventual unraveling in late 1969. Only 36 months separate the two albums; together, they help define the Beatles’ residency at 3 Abbey Road.

Revolver
Release date: August 5, 1966
On April 6, 1966, the Beatles arrived at EMI’s 3 Abbey Road recording studios to begin work on their forthcoming LP. Only a few months had passed since the release of the groundbreaking effort Rubber Soul, but world-wide acclaim, a few hallucinogenic substances and a crew of cutting-edge engineers would combine to make Revolver a full step ahead of its predecessor.

Most of the songs that make up Revolver - one of the finest rock records ever made - required little embellishment; tunes like “Taxman,” “She Said, She Said” and “And Your Bird Can Sing” were built from simple rhythm tracks with only a few added overdubs. But where earlier works like With the Beatles demonstrated the group’s skill as rapid-fire live performers, Revolver showed what they were capable of when given time to experiment and create whole songs from scratch. It took only a few hours to turn John Lennon’s one-chord, eight-bar melody fragment initially titled “Mark I” into the stunning album-closing track “Tomorrow Never Knows,” its pulsating lead vocal (achieved by patching Lennon’s voice through the circuitry of a rotating Leslie speaker cabinet), high-pitched tape loops and heavily compressed drums becoming the blueprint for the entirety of the Revolver sessions.

Incredibly, the quantum leap in sound and substance on Revolver was accomplished using basically the same equipment as 1963’s With the Beatles (the majority of the group’s music was recorded on a four-track tape machine). But what EMI engineers lacked in gadgetry, they more than made up for in ingenuity. Leading the charge was 20-year-old Geoff Emerick, recruited to take the place of departing Abbey Road engineer Norman Smith. Like fellow EMI engineer Ken Townsend, Emerick was eager to bend the rules in order to accommodate the Beatles’ new musical direction.

His impact was immediate: While early albums like With the Beatles captured the tremendous expanse of EMI’s Studio Two, the prevailing sound of Revolver (recorded mainly in Studio Three), as well as the “Paperback Writer”/“Rain” single that preceded it, is one of close-miked drums and horns, ultra-dry vocals and distorted guitars mixed loud and to the fore. The extra time taken to complete the album (a whopping two-and-half months!) only fueled the atmosphere of trial-and-error; by the time the sessions concluded in late July, Townsend and Emerick had devised an entire arsenal of recording tricks and techniques, from the trippy backwards guitar of “I’m Only Sleeping” to the up-front bass that powers Harrison’s hard-rocking opener “Taxman.”

Coming on the heels of the raw-but-revelatory double-disc The Beatles (a.k.a. “The White Album”) and the dysfunctional Let It Be sessions that followed, Abbey Road - the group’s final set of recordings and only the second full studio album to utilize eight tracks - was unlike any work previously attempted by the Fabs, an entire collection of songs built around an intricate framework of guitar colorations and carefully layered vocal overdubs.

Despite their striking dissimilarities, the sessions for Let It Be and Abbey Road very nearly overlapped, with the group setting down a rhythm track for John Lennon’s “She’s So Heavy” in nearby Trident Studios only a few weeks after the legendary January 30 rooftop concert. By then the Beatles were a group teetering on the brink of collapse; that they summoned the initiative to return to 3 Abbey Road that summer surprised producer George Martin, who thought he’d seen the last of them.

Utilizing both Studio Two and Three, the group gradually put together its most polished and detail-oriented work over eight consecutive weeks in July and August. As always, there were new sounds: For Ringo, it was the now-familiar deadened tom-tom tones (the result of a new set of calf-heads acquired just prior to the AR sessions) that gave “Come Together” its distinctive thud. Meanwhile Harrison, an early proponent of electronic music, turned his bandmates onto the sounds of the original Moog synthesizer (a prominent component of “Here Comes the Sun,” “Maxwell’s Silver Hammer”).

Though it wasn’t Lennon’s cuppa tea (“we put out something slick to preserve the myth,” the boisterous Beatle would later claim), Abbey Road’s ornate Side Two neatly predicted the gussied-up production value that would come to define ‘70s guitar rock. It mattered little that the outgoing Fabs could only muster a handful of completed songs; to this day, the side-long medley that is the album’s crowning achievement sounds like a carefully constructed set of overtures, rather than what it really was: a hodgepodge of discarded Lennon-McCartney bits and pieces.

On August 20 - nearly seven years to the day that “Love Me Do” was recorded - the Beatles convened inside Studio Two’s control room to preview a final mix of “She’s So Heavy,” then went their separate ways. “It felt comfortable being back there with George Martin,” Ringo remembered years later. “We knew the place; we felt at home. It was like, ‘Here we are again, lads.’”