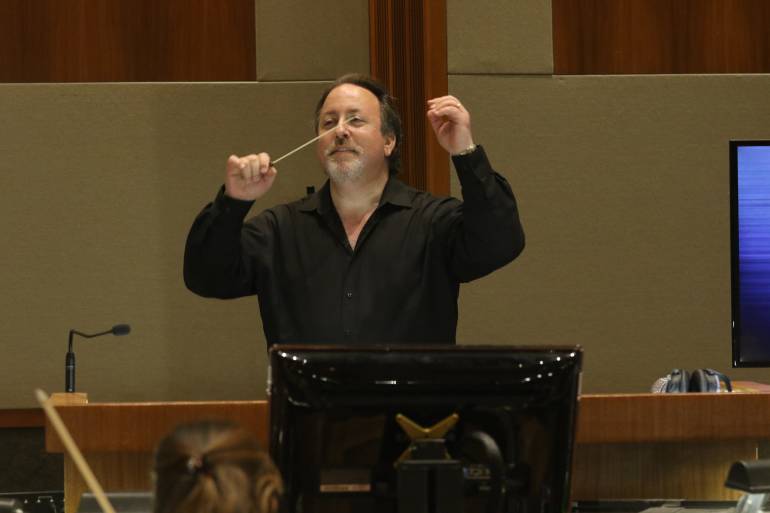 BMI is proud to announce that its 21st annual two-week conducting workshop series taught by BMI Classic Contribution Award winner, conductor and composer Lucas Richman will begin July 10. This year’s exemplary group of workshop participants will include film and television composers Alexander Bornstein (Lifetime’s Disappeared), Andy Forsberg (Lifetime’s Counterfeiting in Suburbia), Peter Karr (Amazon’s How We Got Here), Cindy O’Connor (ABC’s Once Upon A Time), Genevieve Vincent (Mixed Match), Ben Bromfield (Dreamworks/Netflix’ Boss Baby: Back in Business), Timo Chen (Advantageous) and Oumi Kapila (Queen of the Stoned Age). During the series, this elite group will hone their conducting skills in preparation for the final session in which they will conduct a 32-piece orchestra live to picture. The sessions will be held at BMI’s Los Angeles office, as well as at BMI composer Blake Neely’s Cow on The Wall Studio in North Hollywood with the finale taking place at BMI composer Nathan Barr’s newly built Bandrika studio in Tarzana on July 21, 2018.

“The Conducting Workshop is a program we’re very proud of,” said Ray Yee, BMI Assistant Vice President Creative- Film, TV & Visual Media. “Its success through the years can be attributed to Lucas’ skill as a conductor combined with his passion to teach. “

A GRAMMY-winning BMI composer and expert conductor, Lucas Richman has served as Music Director for the Bangor Symphony Orchestra since 2010, and completed a 12-year tenure as Music Director for the Knoxville Symphony Orchestra from 2003-2015. Having fashioned an outstanding career as a conductor with numerous orchestras in the U.S., he has also proved himself an invaluable collaborator for many film composers, serving as conductor of the Academy Award-nominated The Village, As Good As It Gets, Face/Off, Seven, Breakdown, Anastasia, The Manchurian Candidate and Kit Kittredge: An American Girl. In 2010, John Williams invited Richman to lead the three-month North American summer tour of Star Wars in Concert.