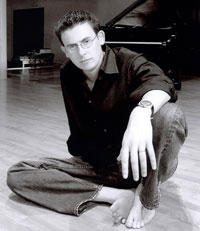 Jazz composer and pianist Misha Piatigorsky has been named the winner of the 11th Annual BMI/Thelonious Monk Jazz Composers Competition for his work, "Low Talk." The $10,000 prize was presented by BMI Senior Vice President Phil Graham during the Thelonious Monk Institute's annual International Jazz Competition held at the Kennedy Center on September 13. Introduced in 1993 by the performing rights organization as an extension of the Monk Institute's annual competition, the BMI Jazz Composers Award is given each year to the young, aspiring composer who best demonstrates originality, creativity and excellence in jazz composition.

Born in Moscow, Misha Piatigorsky grew up listening to his father compose music for the Taganka Theatre, and at age five, he began singing children's songs on Russian national television. He came to the US with his family at the age of 8 and soon began classical piano and English lessons. He discovered jazz at 16 and since then, has studied with Kenny Barron and earned a Masters Degree at Manhattan School of Music.

Misha has performed all over the world, including in Moscow and St. Petersburg, at the Montreux, North Sea, Umbria, and Lisbon Jazz Festivals, and at the Caramoor Jazz Festival. He has collaborated with New York jazz stars Mark Murphy and Claudio Roditi, and performs weekly at Manhattan's Zinc Bar with Mariani Ebert. His various recording credits include compositions for Brazilian Jazz, his own trio, and the Piatigorsky Ensemble. His latest group, AYA, just finished producing their first CD entitled Mama Got Me Thinkin' featuring singers Barbara Mendes, Judy Bady, and Ayelet Piatigorsky, and rapper/storyteller Raj. Other projects include three movie scores, a hip-hop musical entitled Mister, and eight months as the Musical Director of the Gospel Baptist Church in the Bronx. His Trio del Sol, comprised of guitar, percussion, and piano, will soon make its debut.

The Monk Institute was founded in 1986 by former opera singer Maria Fisher with the help of Thelonious Monk Jr., the son of one of jazz music's greatest contributors, and Executive Director Tom Carter. The annual Thelonious Monk International Jazz Competition gives jazz artists and composers the opportunity to launch successful careers, as well as to win valuable scholarship awards to continue their musical education.