Posted in MusicWorld on January 31, 2001 by Scott Schinder 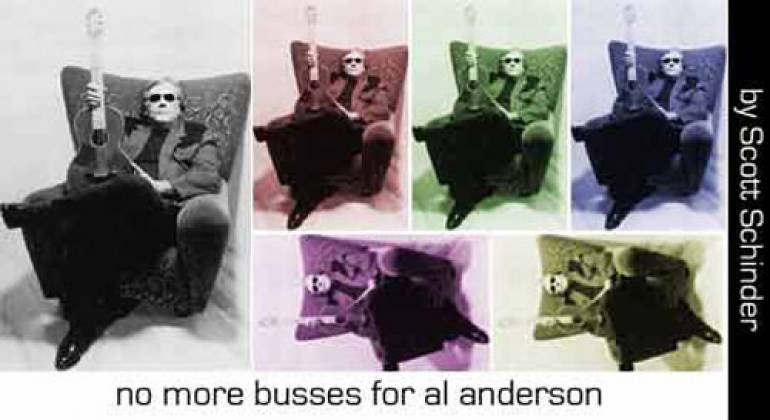 Al Anderson — who, along with Shania Twain, Skip Ewing and Dixie Chick Martie Seidel, was named a BMI Country Songwriter of the Year this past fall — has in recent years emerged as one of Nashville's most dependable tunesmiths, churning out an impressive string of irresistibly catchy, organically gritty hits for the likes of The Mavericks ("All You Ever Do Is Bring Me Down"), Trisha Yearwood ("Powerful Thing"), LeAnn Rimes ("Big Deal"), Diamond Rio ("Unbelievable"), Carlene Carter ("Every Little Thing") and Hal Ketchum ("Fall In Love Again").

Though he's risen to the level of Nashville royalty in recent years, Anderson was well known to rock fans long before he stormed the country charts. He first made his mark as singer, guitarist and main writer of the Connecticut foursome the Wildweeds, who scored a substantial regional hit in 1967 with his composition "No Good to Cry," and subsequently in a 24-year stint with the beloved cult band NRBQ. Over the course of a dozen or so NRBQ albums, Anderson contributed numerous memorable tunes, and was celebrated equally for his stellar instrumental work; in 1993, Musician magazine named him one of the Top 100 guitar players of the century.
At the end of 1993, Big Al shocked NRBQ's fans by exiting the hard-touring band to concentrate on working behind the scenes as a songwriter. Anderson says the decision to quit had more to do with embracing sobriety than any dissatisfaction with the legendarily eclectic band.

"I'll tell ya, those are very fuzzy years," Anderson laughs. "Playing with NRBQ was a great school, and I can't tell you how much I learned from those guys. It wasn't until I got clean that I realized that 24 years of the Quality Inn and Red Roof and smoky clubs and the same broken chairs in the dressing room was getting old for me. I was in the most free band in rock & roll, but I started to feel limited."

Anderson had actually begun going to Nashville to co-write in the mid-'80s, and Hank Williams Jr. recorded his "You're Gonna Be A Sorry Man" in 1988, but it wasn't until after leaving NRBQ that he began pursuing the life of a professional songwriter in earnest. His transition from road warrior to pro tunesmith began when he and Carlene Carter co-wrote "Every Little Thing," which became the biggest hit of Carter's career. Anderson followed that success with another Carter collaboration, "Something Already Gone," for the Maverick film soundtrack, and hasn't looked back since.

Anderson has also found himself in demand as a session player for the inventive guitar chops he honed during his years on the road, and his distinctively gruff vocals have been tapped for numerous commercial jingles. But it's his writing talents that are his main focus these days.
"I've learned a lot, but I still have no idea what I'm doing," he says. “I'm still a rock & roll guy, and I believe in recognizing the value of dumbness. My motto is 'Make dumb good.' 'All You Ever Do Is Bring Me Down' is, like, the dumbest song ever written — the chorus is exactly the same melody as the verses — but it's the greatest record goin'."

Anderson, whose discography includes three solo releases, says that he's hoping to release a new album of his own at some point in the near future, though not under his own name. He's more interesting in making an album with his Nashville-based combo Whitey, which also includes the aforementioned Jeffrey Steele, guitarist Scott Baggett, bassist Glenn Worf, keyboardist Reese Wynans and drummer Chad Cromwell. Though the band has played some local dates and Anderson admits that he misses performing, he's quick to add that he's in no hurry to return to the road.

"I'm not getting on the bus again," he says. "Considering that I'll be 54 in July, (songwriting) is a much nicer way to be making a living in music. I like feeling good every day."