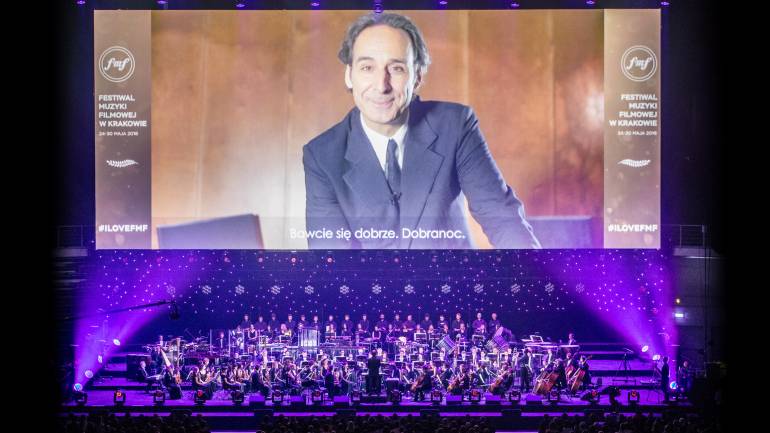 Oscar-winning composer Alexandre Desplat received yet another accolade at this year’s Krakow Film and Music Festival, where he was awarded the prestigious Kilar Prize for his significant contributions to film music. His brilliant scores for Roman Polanski’s most recent films, Venus In Fur, Carnage and The Ghost Writer, were all performed in a concert in honor of Polanski, who was recognized this year by the Polish Filmmakers Association for his contribution to Polish cinema.

Also celebrated were the electronic scores of BMI Richard Kirk Award winner Cliff Martinez for Drive, Only God Forgives and The Neon Demon, which were transformed to orchestral life at the AlterFMF concert by Berlin-based composer and orchestra arranger Stefan Behrisch. Classic symphonic soundtracks, electronic layering and sound engineering were key topics of discussion throughout the festival, which ran from May 24-May 30, with a closing concert on May 31. Appropriately, Martinez also participated on a panel discussing the merits of both electronic and orchestral composition.

Other highlights included a live performance from excerpts of BMI composers Harry Gregson-Williams’ score for Shrek, Alan Menken’s Beauty and the Beast and Pocahontas, and Bobby Lopez and Kristen Anderson-Lopez’s Frozen during the festival’s animation gala. In addition, a youth concert featuring the music of Dynamic Music Partners, which includes award-winning BMI composers Lolita Ritmanis, Kristopher Carter and Michael McCuistion, was received with enthusiasm by the large audience.

BMI’s Vice President of Film/TV Relations Doreen Ringer-Ross made the trip from Los Angeles again this year to support the BMI-affiliated composers and to lend her expertise at a discussion about creating original music for animated film and television. The renowned Krakow Film and Music Festival, which just concluded its ninth year, annually brings together film composers and music professionals for a series of masterclasses and concerts in the heart of one of Poland’s oldest, largest and most historic cities.