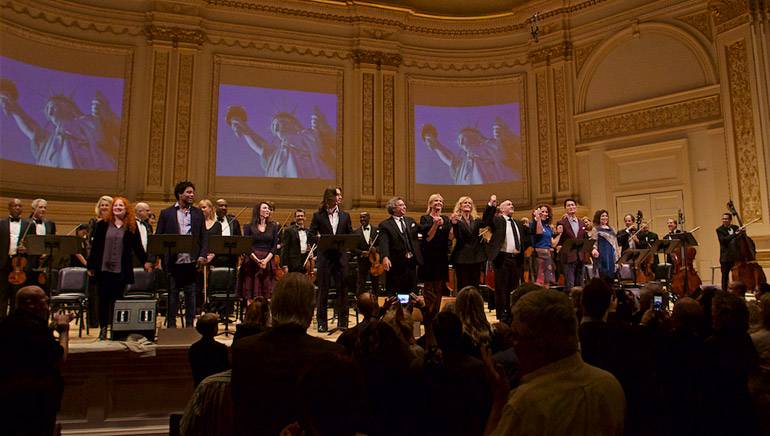 The extraordinary work of BMI composers Lolita Ritmanis, Peter Boyer and Steven Lebetkin were front and center at Orchestra Moderne NYC’s October 7 performance of Journey to America: From Repression to Freedom (Part 1). The Carnegie Hall concert, which was expertly conducted by the orchestra’s founder, Amy Andersson, celebrated the American immigrant experience and featured “Overture to Light” by Emmy Award-winning composer Lolita Ritmanis, GRAMMY-nominated composer Peter Boyer’s “Ellis Island: The Dream of America,” and the world premiere of composer Steven Lebetkin’s “Concerto for Violin and Orchestra,” performed by Momo Wong.

Ritmanis, who is President of the Alliance for Women Film Composers, was proud to be part of the program that highlights the struggle and strengths of immigrants. In addition to “Overture to Light,” and many other orchestral works, the award-winning composer has also scored hundreds of hours of music for Batman Beyond, Batman: The Killing Joke, Marvel’s Avengers Assemble, Justice League, and Superman, to name a few. BMI composer Peter Boyer has also enjoyed many, many performances of his works, including “Ellis Island: The Dream of America,” which will soon be featured in a PBS Great Performances special about immigration. Also well received by the New York City audience was the premiere performance of BMI composer Steve Lebetkin’s fitting concerto, which perfectly matched the tone of the impressive program.