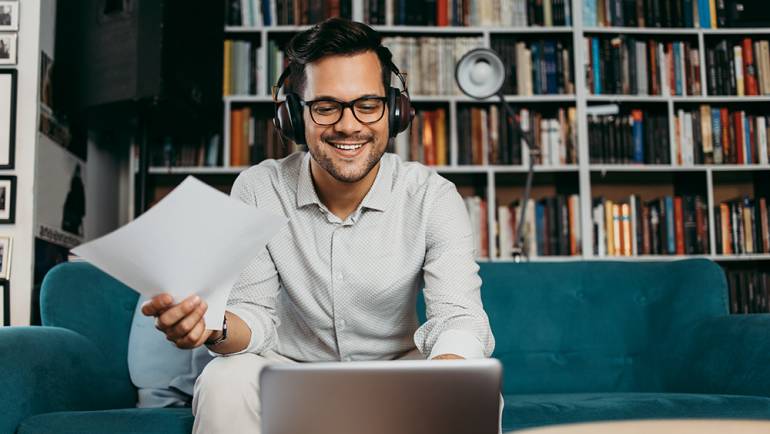 Early on in my songwriting journey my goal was to have my songs represented by a music publisher—someone with the connections to get my masterpieces to the top artists of the day. I attended industry functions, networked, and took workshops where publishers screened songs, and … I received rejections from every publisher who listened to my work. When I got tired of having industry pros fail to recognize my brilliance, I signed with the only publisher who truly cared about my songs—the only publisher who believed I was sitting on a treasure trove of #1 hits: me.

I thought, why should I give up my rights—and more importantly, half of the millions of dollars my songs were sure to earn—when I can publish them myself? So that’s what I did.

This was before the era of MP3s and emails, so after working my day job, I spent countless nights researching which artists were looking for songs, tracking down addresses for their A & R reps, typing cover letters, making cassette or CD copies of my songs, photocopying my lyric sheets, and preparing packages to be mailed the next morning. Sadly, my efforts did not yield a recording of any of my songs.

Setting up a publishing company is easy. If you are the publisher or co-publisher of one or more commercially released compositions or music that is being broadcast or performed in venues that are licensable by BMI (such as nightclubs or concert halls) you can complete some simple paperwork online, make sure that your company name is not already being used by an existing publishing company, pay a nominal fee, and … you’re a publisher! But being an effective publisher—one who is able to generate income from the songs you represent and handle all of the administrative functions that come along with being a publisher—is much harder to do than opening a company. Whether you are acting as your own publisher, or representing other writers’ songs, these are five abilities you will need to master.

A publisher is only as good as the songs he or she represents. When I represented my own songs, I was unable to be objective. When every publisher I contacted passed on my songs, the possibility that the problem might have been my songs never entered my mind. But the reality is that while my songs were well-crafted, they were not strong enough to bump songs written by the hitmakers of the day, nor were they better than the songs artists could write for themselves.

Whether the songs in your publishing catalog are self-written or were created by other writers, they will need to be exceptional and well-suited for the current market if they are to rise above the stiff competition. The ability to recognize a hit is a critical skill needed to be an effective publisher. By studying the hits and identifying the common denominators, receiving professional feedback on your songs, and staying open to what might be the next big thing, you can improve your ability to identify potential hits.

Successful publishers require relationships with record label executives, music producers, recording artists, and music supervisors. You can meet these people by networking at music industry events and getting referrals, but it takes a very special personality type to take these interactions beyond a perfunctory business transaction to the kind of connections that are so often crucial to success in the music business—and almost every industry.

For some writers and publishers, the ability to break through the walls and insinuate themselves into the industry’s inner circles is their greatest talent. I recall an instance when one of my publishers met with a major-label recording artist whom he had never previously met. Within an hour they had a date set to play tennis as well as a lunch date. Similarly, I worked with a writer who regularly had superstars staying at his home, and a publisher who hosted weekly parties where record label executives and hit artists hung out at her swimming pool.

Some writers are invigorated by the demands of wearing the two hats—those of a songwriter and a music publisher. They love the business side of the songwriting business, and seem to easily establish relationships with other industry pros. Other writers get stomach spasms at the thought of pursuing access to decision-makers and pitching material to them. In determining whether you are well-suited to be a publisher, assess where you land on that spectrum.

For additional tips on networking read “Networking Tips From an Expert.”

Time to Devote to Your Business

Establishing professional relationships, researching which artists are recording, and the types of songs they are looking for, setting up meetings to pitch songs, and taking care of the additional demands of being a music publisher can be a full-time job. Publishers at major companies focus 100% of their time on acquiring songs, pitching them, establishing relationships with decision-makers, and arranging advantageous collaborations for their writers, such as collaborations with recording artists, hit writers, and music producers. In most cases they have staff who handle administrative functions.

If you are working a day job and juggling additional responsibilities, as well as writing and recording songs during your limited time off (for those who are self-publishing), there might not be enough hours in the day to do all of these tasks effectively. Assess whether you have the time to invest to be an effective publisher.

If you are successful in placing songs you will need to issue appropriate licenses. These might include recording licenses (aka mechanical licenses), synchronization licensing agreements (for TV/Film placements), print licenses, sub-publishing agreements, and more. In my book This Business of Songwriting (Revised 2nd Edition) I translate—from legalese to plain English—the agreements you would be likely to encounter as a songwriter and publisher.

You will need to be sure your songs are registered with the copyright office and your PRO. If you publish material other than your own songs you will need to negotiate and issue publishing agreements with writers or engage entertainment attorneys to do so on your behalf. You will also need to collect and distribute the writer’s share of royalties and licensing fees you collect for the writers you represent or hire an administrator to handle these tasks.

I’ve seen many of my songwriting students open publishing companies to represent their own and other writers’ material. Some of them were gung-ho when they began, only to have their enthusiasm fizzle after a year or two of failing to generate significant income. There are countless stories of mega-hit songs being rejected fifty or more times over a period of years before finding their home. Accept that it can—and likely will—take many years to establish yourself as a successful publisher. Assess whether you are willing to make a long-term commitment and whether you have the kind of personality that can persist in the face of repeated rejection.

For those who are considering publishing their own material, it is unlikely that anyone will ever have a stronger belief in your songs—or more incentive to place them—than you. If you have received professional feedback that your songs (or the ones you represent) are competitive with those that are achieving success, and you have the skills and attributes listed above, a successful career as a music publisher might be in your future.

For additional information about starting a publishing company read “How to Start a Music Publishing Company.”