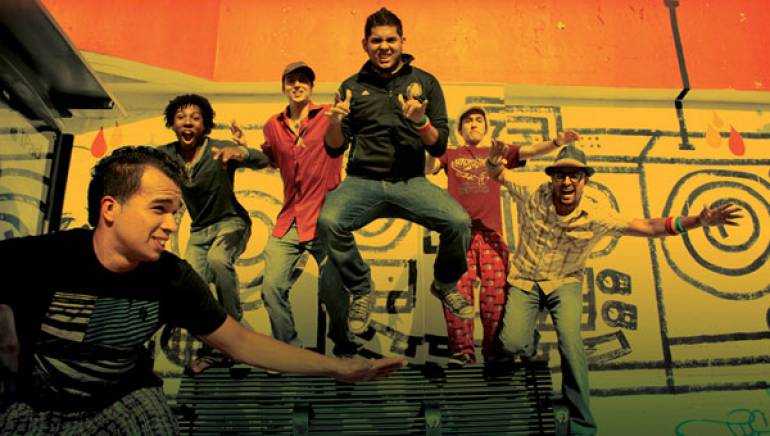 Miami may be best known for its nightclubs and DJs, but that city’s inimitable melding of Latin American and Caribbean musical styles has resulted in one of the most vibrant and diverse music scenes in the world. Cue Bachaco.

Named after ant native to Venezuela used by indigenous people to make hot sauce, the band offers an appropriately explosive fusion of sounds to match. A mash-up of reggae, cumbia and dancehall—with a little bit of ska and hip-hop thrown in for good measure—Bachaco’s dancefloor-crowding sound is winning fans in Miami and the East Coast. They recently toured Argentina and are busy getting ready for a promotional tour, stopping in Austin for SXSW and the Austin Reggae Festival.

Not surprisingly, the members of Bachaco are every bit as multi-cultural as their music: Brothers Eddy and José Morillo who hail from Venezuela, founded the band in 2007, along with fellow Venezuelan Domingo Medina (drums), Jamaican Matthew Jacquette (guitar/vocals), and Bruce McKinnon (trumpet/vocals), who is half Columbian and half Irish. They recently added trombone player Alex Cruz from Puerto Rico.

The band’s first single “Cumbia pa’ la nena” is receiving a lot of attention. An infectious dance tune, the song pays heart-pounding tribute to the importance of the cumbia in Latin music. The song is accessible to a young, carefree audience, but also harkens back to cumbia’s history as a courtship dance among the African slave population of Columbia’s Caribbean coastal region. Lead singer Eddy Morillo says the cumbia has had a “big influence on his life,” as he listened to the music throughout his childhood in Venezuela. While he reminds listeners the cumbia is not the only thing Bachaco does well, he proudly acknowledges that the band’s first single has “people dancing all over the world.”