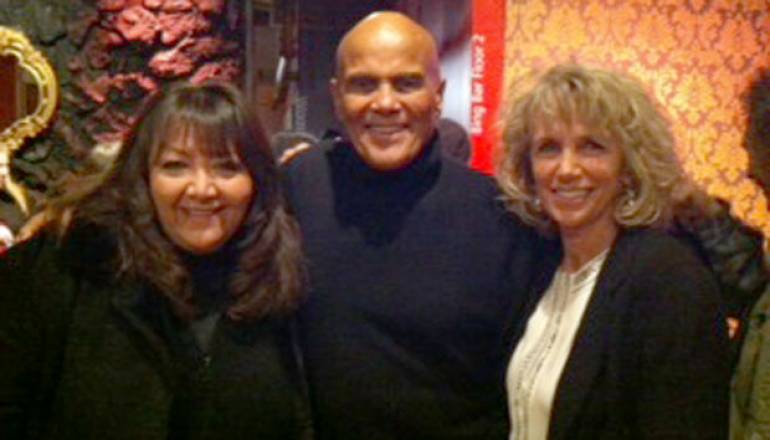 BMI’s Doreen Ringer Ross pauses for a photo with Harry and Pam Belafonte at the screening of “Sing Your Song.”

The flight from LA to Salt Lake City was uneventful…which is how you want flights to be these days. I sat across from veteran actor and first time director Michael Rapaport, who made a documentary called “Beats, Rhymes, & Life: The Travels of a Tribe Called Quest,” which is in the doc competition. I showed him a copy of his write up in the printed Sundance film guide, which he hadn’t seen. Paper versions of anything are so old school and rare these days. As a sponsor, BMI was one of the lucky ones who received an actual printed copy. It feels like everything changes faster than can be humanly processed now, but we all have to flow with it.

Sundance always embraces change. Take the opening night of the festival for instance. In lieu of a traditional opening night premiere, they went with a choice of five different screenings, including the one that I saw called “Sing Your Song,” a biographical documentary about singer/actor/activist Harry Belafonte. I always knew he was the handsome singer of “Day O” (the Banana Boat song), but I never realized that he was so deeply involved in the American Civil Rights Movement, or that he worked so closely with Dr. Martin Luther King, Jr. His story is amazing and inspiring, and the film is brilliant.

As much as things change and evolve, the one thing that remains consistent at Sundance is their dedication to the discovery and development of independent artists and audiences who appreciate them. BMI has had a long standing relationship with Sundance because of that ideology. One of the reasons we come to the festival every year is to support our composers who have scored films in the festival. We tie our agenda to the goals of the Sundance Composers Lab, which we also support, and this year, we are thrilled to see so many Lab alumni composers with films in the festival, including “Sing Your Song,” which was scored by Hahn Rowe. Even the Sundance trailer that runs before each film this year was scored by a Lab grad, Ryan Beveridge. Another Lab grad with his first film at Sundance is iZler, who scored “On the Ice,” which is in the dramatic competition.