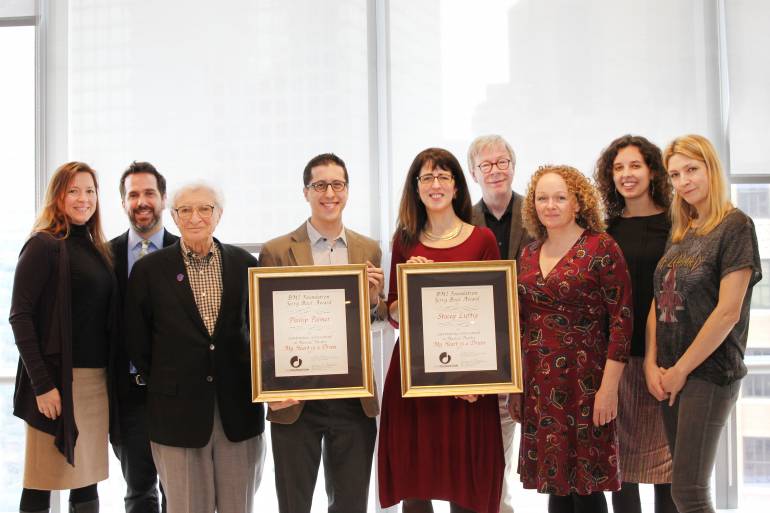 The BMI Foundation has announced Stacey Luftig and Phillip Palmer as the winners of the 2017 Jerry Bock Award for Excellence in Musical Theatre. The $2,000 grant is awarded annually to the lyricist and composer of the most promising musical created in the BMI Lehman Engel Musical Theatre Workshop, a Tony-honored program for new writers in the genre. The award was presented at a celebratory luncheon held on March 1, 2017, at BMI’s New York City headquarters. Also in attendance was Mr. Bock’s longtime collaborator and award-winning lyricist Sheldon Harnick.

This year’s winning work, entitled My Heart Is the Drum, was inspired by Palmer’s travels to South Africa and Ghana, where he volunteered and studied traditional music. Set in West Africa, Drum chronicles a young woman’s pursuit of education despite adversity and pays tribute to the transformative role of women in modern society worldwide. Luftig and Palmer remarked, “It is an incredible honor to receive this award. Jerry Bock and Sheldon Harnick are icons of musical theater and heroes for both of us, and also for our bookwriter, Jennie Redling. Thank you to BMI for your support and mentorship over many years.”

The Jerry Bock Award was established in 1997 in honor of the late Pulitzer Prize- and Tony-winning composer Jerry Bock, whose credits include numerous Broadway classics such as Fiddler On The Roof, Fiorello, She Loves Me, The Rothschilds, The Apple Tree, and Tenderloin. Award finalists are recommended by the Workshop Steering Committee and the winners’ selection is overseen by Workshop Director and BMI Foundation Board Member Pat Cook.

For more information on Luftig and Palmer, please visit the BMI Foundation.