Posted in MusicWorld on March 23, 2006 by Rob Patterson 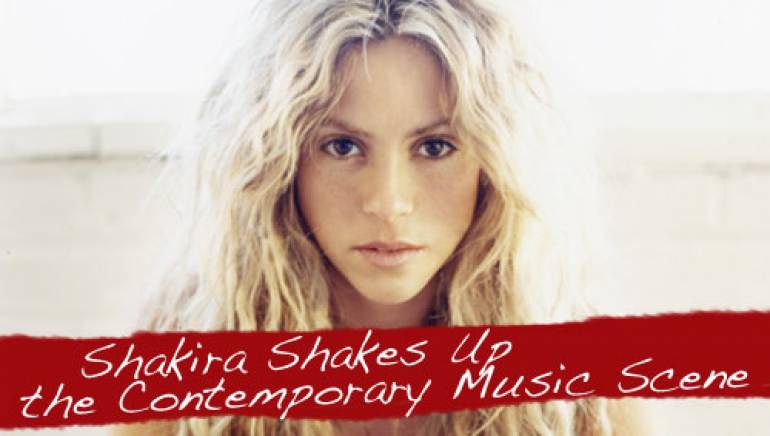 Shakira is not just an international superstar and the most successful female Latin crossover act ever. She has also become a genuine cultural force.

After all, how many musical artists have Nobel Prize winners weighing in with praise for them? “Shakira’s music has a personal stamp that doesn’t look like anyone else’s and no one can sing or dance like her, at whatever age, with such an innocent sensuality, one that seems to be of her own invention,” notes her fellow Colombian Gabriel Garcia Márquez. And as one would expect from the writer who took the top honors in literature, he aptly describes Shakira’s appeal to millions around the globe.

Though diminutive in height at a mere 4’ 11” tall, Shakira casts a long shadow across the contemporary music scene. By 2001, her Spanish-language albums had already made her a star in the Latin world and beyond. With the release that year of Laundry Service, her first recording largely sung in English, Shakira leapt into the pantheon of pop superstardom, selling 13 million albums worldwide. And with total sales to date of more than 25 million records, the 28-year-old phenomenon is just getting started.

She was born Shakira Isabel Mebarak Ripolli in Barranquilla, Colombia with internationalism in her background as well as her future. Her father is an American of Lebanese descent and her mother a Colombian, and her now-famous first name is Arabic for “woman of grace.”

In her youth, Shakira absorbed both Latin and Arabic music from her parents while also becoming a fan of English language rock and pop. Something of a prodigy, Shakira wrote her first song at the tender age of eight. By the age of 13, she signed a record deal with Sony Music in Colombia, and in 1991 released her first album of original songs, Magia (“Magic”), making a bit of a splash on the Colombian music scene. She also forged a career as an actress on the Colombiantelenovela “El Oasis.”

It was on her 1995 album, Pies Descalzos (“Bare Feet”), that Shakira began to win international fame. Thanks to a powerhouse string of six hit singles, it topped the chart in eight countries and went on to sell a million copies in the U.S. Her 1998 CD, ¿Dónde Están los Ladrones? (“Where Are the Thieves?”), produced by Emilio Estefan, furthered Shakira’s American fame, topping Billboard’s Latin album chart for 11 weeks and yielding a pair of No. 1 Latin chart singles, “Ciega, Sordomuda” and “Tu.”

The following year, Shakira appeared on MTV’s “Unplugged,” breaking language barriers with the network’s first broadcast of a Spanish-language musical performance. The album from the show earned her a Grammy for Best Latin Pop Album and became her third U.S. million seller.

Meanwhile, Shakira has been using her success to help others. She started a foundation named Pies Descalzos, like her 1995 album, to help Colombian children who have been affected by the political violence in her native land. She was also named a Global Goodwill Ambassador for UNICEF in 2003, becoming the youngest person ever to receive that honor.

Not one to rest on her accomplishments, Shakira once again broke new ground in 2005 by releasing two totally different albums: Fijación Oral, Vol. 1 in Spanish and Oral Fixation, Vol. 2 in English. “I did not set out to make two albums when I began the writing process,” she explains. But after penning some 60 songs in both languages, Shakira chose 20 to record for the two releases.

“The albums are totally different from one another,” she explains, “Each has unique songs, melodies, lyrics and musical styles.” And by now, uniqueness is what Shakira’s millions of fans have come to expect.