Writers who have appeared in the past include Norah Jones, Vanessa Carlton, Lisa Loeb, Avril Lavigne, John Oats, Gavin Degraw, and Charlotte Sometimes. Kate Voegele, winner of the Circle’s 2006 contest, is currently starring in the hit tv show One Tree Hill and her new video is currently on MTV’s TRL. Company of Thieves, winners of the 2007 contest, were recently named “one of the top bands to watch for in 2008” by the Chicago Daily Herald.

The Grand Prize includes $5,000 cash, a chance to perform at Madison Square Garden as part of The New York Songwriters Circle/New York Titans Concert series and professional recording studio sessions at Dubway Studios, up to a maximum of $1,000.

Second Prize is $3,000 and third place will receive $1,500. Additionally, a special International Award of $1000 will be awarded to a writer who originates from anywhere in the world outside the U.S.

All 12 finalists will receive:

Deadline for submissions is September 30th, 2008. For more information about the contest, the list of judges, sponsors, prizes, and to submit your music, visit songwriters-circle.com. 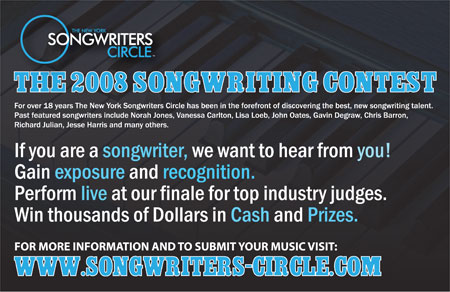