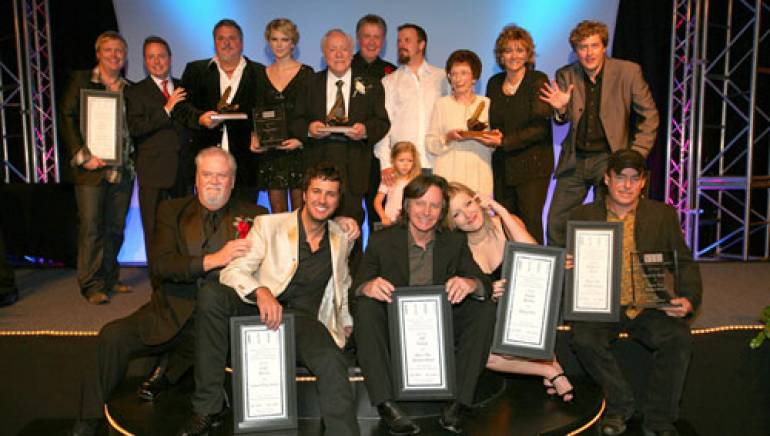 Bob DiPiero, Lester Flatt & Earl Scruggs and Hank Williams, Jr. were honored for their songwriting contributions and welcomed to the esteemed ranks of the Nashville Songwriters Hall Fame during the 38th Annual Hall of Fame Dinner and Induction Ceremony held Sunday, October 14.  Members of the Nashville songwriting and publishing community filled the ballroom of the Renaissance Nashville hotel to celebrate the musical contributions of the newest inductees.

During the evening’s ceremonies, each new member of the Nashville Songwriters Hall of Fame was inducted by a fellow artist, friend or family member, while star-studded performances highlighted their respective repertoires.

Bluegrass icons Lester Flatt & Earl Scruggs were inducted by Marty Stuart, who joined Flatt’s band at the age of 13.  The Grammy®-winning Del McCoury Band took the stage to perform the Flatt & Scruggs hits “If I Should Wander Back Tonight,” “Earl’s Breakdown,” “Little Cabin Home on the Hill,” “Don’t Get Above Your Raisin’” and the Martha White jingle before Stuart joined them on “Foggy Mountain Breakdown.”  Flatt’s widow Gladys Flatt and granddaughter Tammy Brumfield joined Scruggs to accept the Nashville Songwriters Hall of Fame Manny Award.  “It’s been a wonderful ride,” Scruggs said.  “Thank you all very much.”

Hank Williams, Jr. was inducted in “family tradition” by his daughter, Holly Williams.  “It’s a surprise that I’m inducting my dad tonight,” she said.  “I’m a songwriter myself. It’s my passion, and I am a true fan of my dad.”  She then performed three of his songs-“Feelin’ Better,” “Whiskey Bent and Hell Bound” and “Blues Man”-before country chart-topper Gretchen Wilson took the stage to perform the Bocephus classic, “All My Rowdy Friends Have Settled Down.”  With his induction, Williams joins his legendary father as the only father/son members of the Nashville Songwriters Hall of Fame.  As he accepted his award, Williams told the crowd that he had taken banjo lessons from Scruggs at the age of 19.  “I’m from the old school,” he said.  “I know a lot of you are saying that these awards don’t mean anything to old Hank, but this one is special.  I need this, thank you, and I need y’all.”

Bob DiPiero’s career began when he arrived in Music City in 1979 and found an early supporter in Amy Kurland, owner of the renowned Bluebird Café, so it was fitting that she presided over his induction.  DiPiero’s friends in the Hit Men of Music Row-Craig Wiseman, Tony Mullins and Jeffrey Steele-performed a medley of his hits including “American Made,” ” Take Me As I Am” and “Blue Clear Sky” before Neal McCoy performed his #1 hit “Wink,” which was named BMI Country Song of the Year in 1995. “Coming from Youngstown, Ohio, I thought I might be indicted, but not inducted,” DiPiero quipped as he accepted his award.   ”I definitely didn’t get here by myself,” he said, before acknowledging a long list of supporters, mentors and fellow writers.  “I love all of you.  Thank you for this honor.”

In addition to the Nashville Songwriters Hall of Fame inductions, the hall’s sister organization, the Nashville Songwriters Association International (NSAI), presented its annual Songwriter Achievement Awards.  The organization’s professional songwriter members named “Bless the Broken Road,” by Bobby E. Boyd, Jeff Hanna and Marcus Hummon, their Song of the Year.  BMI singer/songwriter Taylor Swift shared the Songwriter/Artist of the Year honor with Alan Jackson. 2007 was a breakthrough year for Swift, who wrote or co-wrote every song on her platinum-selling eponymous debut. Taylor is the youngest recipient of the award to date.