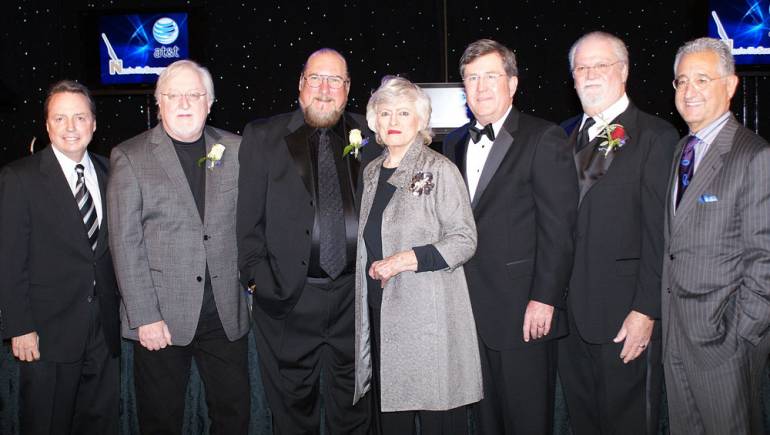 BMI songwriters were called to the stage again and again. Game-changer Taylor Swift was named Songwriter/Artist of the Year—her third claim to the crown in four years. Tom Douglas shared Song of the Year honors for co-writing “The House That Built Me,” recorded by Miranda Lambert. NSAI also recognized the Top 11 “Songs I Wish I Had Written,” voted on by the organization’s professional songwriter members. In addition to top-ranking “The House That Built Me,” Douglas’ “I Run to You,” which he co-wrote with all three members of Lady Antebellum, and “Southern Voice,” co-written with fellow BMI hit-maker Bob DiPiero, made the elite list, as did “A Little More Country Than That,” co-written by Wynn Varble; “Big Green Tractor,” co-penned by Jim Collins; “Red Light,” co-written by Melissa Peirce; “The Climb,” co-composed by Jon Mabe; “White Liar,” written by Miranda Lambert and Natalie Hemby; “You Belong with Me,” written by Taylor Swift and Liz Rose; “Use Somebody,” written and recorded by Kings of Leon; and Lady Antebellum’s “Need You Now,” co-written by members and BMI songwriters Charles Kelley and Dave Haywood.

Musical bridge-builders Steve Cropper and Paul Davis were inducted into the Nashville Songwriters Hall of Fame. The two BMI legends entered the hallowed Hall in separate categories: Cropper in the Songwriter field, Davis under the Songwriter/Artist category.

Musician, artist, songwriter, and performer, Steve Cropper changed the sound of the American south, which, in turn, changed the sound of world. He is a co-writer of classics including Otis Redding’s “(Sittin’ On) the Dock of the Bay” and Wilson Pickett’s “In the Midnight Hour,” but he is also the formidable guitarist of the Mar-Kays and Booker T. & the MGs. As the house guitarist for Memphis’ Stax Records, he played on seminal recordings by Sam & Dave, Carla Thomas, Eddie Floyd, Johnnie Taylor, Rufus Thomas, Wilson Pickett, Otis Redding and more. He is a member of the Songwriters Hall of Fame and, with Booker T. & the MGs, the Rock and Roll Hall of Fame.

The late Paul Davis is the voice and the pen behind pop jewels including “I Go Crazy” and “Sweet Life.” As a fulltime songwriter living in Nashville, he created a string of hits, including Dan Seals’ “Bop” and “Meet Me in Montana,” which was a duet with Marie Osmond; Tanya Tucker’s “Love Me Like You Used To” and “Down to My Last Teardrop”; and Lorrie Morgan’s “Back in Your Arms Again.” After suffering a heart attack, Davis died in 2008, just one day after his 60th birthday.