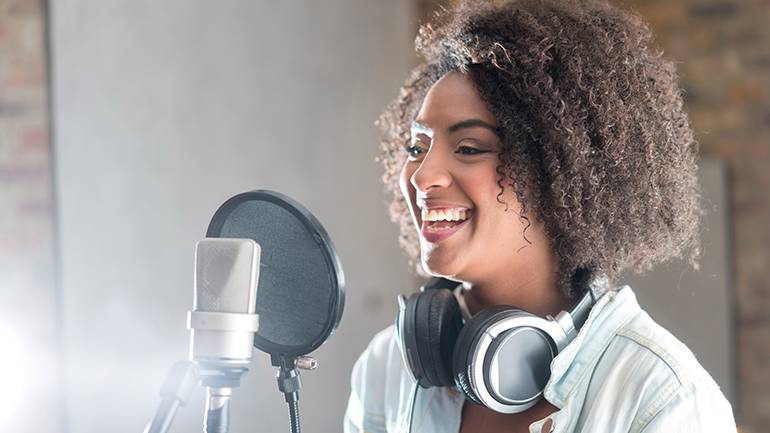 For the vast majority of us who don’t reside in a soundproof living space, those increasingly spiffy effects samples that come included in most recording packages these days have been a godsend, allowing us to get professional tone out of a pint-sized box. So seductive are some of these plugins and processors that it’s easy to forget what it takes to get those sounds yourself. And while good digital imitators come uncannily close to the real thing, there is no substitute for moving air—at least some of the time.

One way to get out of the box even briefly is to periodically brush up on your miking skills. Whether it’s recording an instrument amplifier or capturing the sound of percussion, even a 1-2 inch difference in the way a mic is aimed at a speaker, a shaker, or even a singer can substantially alter the recorded sound.

This is why we should spend more time beforehand strapping on headphones and experimenting not only with mic placement, but also multiple mics, or even the room you’re using. Also important is understanding which type of mic is likely best suited for the job at hand.

When recording a guitar amplifier, knowing precisely where to situate the mic depends on a number of factors, including type of guitar, pickups (humbucking or single-coil), style of amp (tube vs solid state), speaker size and more. In general, aiming the mic closer to the center of the speaker produces a brighter sound; conversely, moving it ever so slightly towards the speaker’s outer edge prevents harshness by reducing high end. Somewhere in between is the sound you want—using your headphones and channel fader, gradually shift the mic positioning around the speaker cone while lightly strumming until you start to hear the “right” tone for your tune. The same goes for acoustic—again with headphones on, situate yourself in front of the microphone and slowly move the guitar in the vicinity of the diaphragm (not too close) so that the sound you’re hearing isn’t too bright nor boomy (bottom-heavy acoustics tend to work best when the mic is pointed near the 12th fret, rather than at the soundhole itself).

If you can’t get the electric sound you’re after using a single mic, consider adding a second mic to the mix. A condenser hung several feet back gives the signal a chance to expand and, when combined with an up-front mic, provides a full yet focused overall sound.

Distance also plays a key role when cutting vocal tracks. Particularly when using a condenser mic, even a subtle change in positioning can dramatically affect tone and timbre. For instance, moving the singer within a few inches of the mic introduces the so-called “proximity effect”—that is, the sound is more intimate with noticeably deeper bass tonality. Rolling the boom stand back not even a foot allows the vocal to become a bit airier; switching the mic’s pickup pattern from cardioid (one-side live) to omni (live all around) enhances this effect. You could also try suspending the microphone differently—for the Black Keys’ 2010 breakout effort Brothers, producer/engineer Mark Neill hung a Neumann KM184 on a high boom stand pointed directly down toward singer Dan Auerbach’s head. “You see that set up all the time in the old studio pics—that’s because it works so well,” says Neill. “It’s also a great way to control unwanted sibilance and p-pops.”

You can fine-tune your drum miking the same way. To improve low-end articulation, engineers typically place a mic inside the bass drum aimed directly at the beater; pulling the mic back a foot or so (or augmenting with a room mic) results in a more natural sound with greater resonance. While many record snare drum using a dynamic mic placed only a few inches from the batter head (known as “spot miking”), others believe you get greater tonality by pulling the mic away from the drum (at a slight angle, rather than straight down).

Having all functionality in a laptop or other bantamweight device means you never have to be tethered to any one location. Take advantage of this portability by experimenting with different types of spaces—a room with higher ceilings and wood floors can offer a rich reverberant sound, suitable for vocals but also drums and percussion.

If you have a few different mics on hand, you could always try mixing and matching models. While large-diaphragm condensers like the mighty Neumann U87 have long been the de facto instrument for achieving crystalline vocals, on occasion engineers might opt for something like a basic Shure SM57 or other dynamic mic when seeking a brighter or more mid-range sound. Because dynamics aren’t nearly as sensitive as their condenser peers, remember to keep the mic in a fixed position when recording in order to maintain signal consistency.

All of the above will be for naught if you don’t have a great sound in the room beforehand. Therefore prior to each session, allow your tube amps time to heat up, ensure all instruments are in tune with each other, drum heads are clean and properly adjusted, and vocalists run through their warm-up exercises. And of course, having highly skilled players who know how to get it right ahead of time will only make the job that much easier.