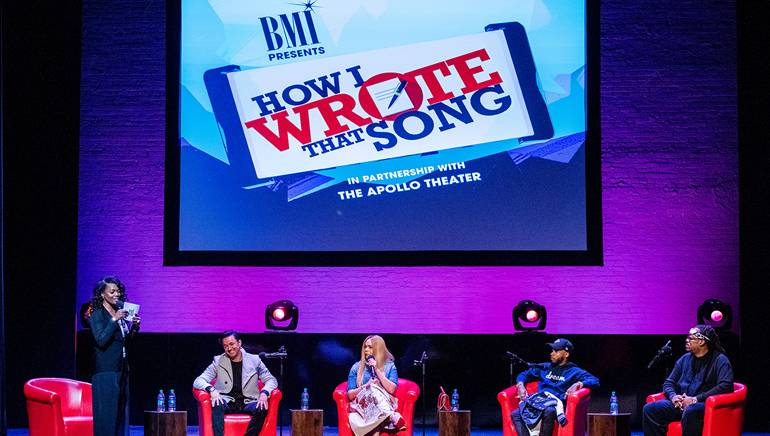 On Saturday, January 27, BMI presented its annual pre-GRAMMY event How I Wrote That Song® (HIWTS), in partnership with the Apollo Theater, at the legendary performance hall. The audience was treated to an enlightening panel discussion that featured multi-platinum and GRAMMY award-winning music producer Mark Batson, GRAMMY award-winning R&B royalty Faith Evans, GRAMMY-nominated R&B sensation Tory Lanez and GRAMMY award-winning superproducer RedOne. Moderated by BMI’s Vice President, Creative, Catherine Brewton, attendees were given first-hand insight into the making of some of the participants’ most successful hits.

During the conversation, Faith Evans spoke about the process of creating the Notorious B.I.G. tribute “I’ll Be Missing You,” and how it made her a household name with people unfamiliar with her catalogue. Relative newcomer Tory Lanez stressed the importance of quality over quantity in an artist’s work and setting the bar high for his art, while Mark Batson talked about working with everyone from India.Arie to LeAnn Rimes, even sharing the funny story behind crafting Anthony Hamilton’s breakout single “Charlene.” RedOne, who is responsible for radio favorites such as Lady Gaga’s “Poker Face” and Enrique Iglesias’ “I Like It,” talked collaboration and the significance of working with artists he believes in, regardless of where they are in their career.

Before closing out the panel, Brewton called surprise guest GRAMMY award-winning songwriter/producer Rodney Jerkins to the stage, who was in the audience among industry tastemakers, students and aspiring songwriters. The renowned hitmaker, also known as DarkChild and whose signature sound shaped the careers of Brandy, Destiny’s Child, Michael Jackson and more, provided invaluable advice and encouraged the crowd to never give up on their craft.