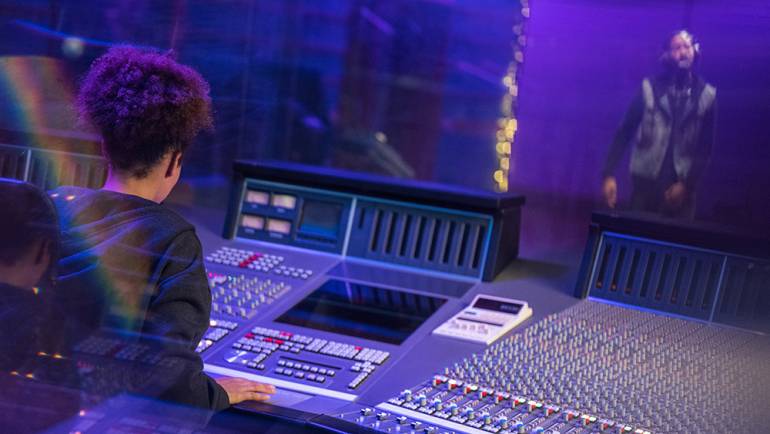 Whether it’s switching microphones or switching off reverb, one thing I try to do is avoid using the same recording mechanics from song to song. This is particularly true of mixing—if the tendency is to have nearly identical ingredients in the same spot on every track, your album is likely to…well, lack distinction.

Luckily, the physics of recording is such that what may have worked great last time might just as easily sound downright awful this time. Therefore, learning how to adapt is key to creating mixes that are consistently pleasing to the ear and have an unrelenting groove.

Before you start arranging your tracks in stereo, your first order of business is ensuring you have a mix that’s manageable. For instance, if you’ve recorded a drum kit across 4-5 tracks and there are multiple takes of each, you should do a reduction mix (or create a subgroup)—that way you’re only reaching for one or two faders, rather than a whole fistful. While this requires that you commit to a basic drum mix for the time being, you can always go back and try again after the fact. And remember to focus on how the mixed track sounds when blended with the other parts, rather than on its own.

An electric lead or pitched-up synth placed directly over a loud ride cymbal or open hi-hats could result in an ear-piercing overload of high end; similarly, a mono acoustic guitar on the same path as an electric bass will often sound annoyingly boom-y. This is why it’s helpful to keep instruments with “shared” frequencies separated in the mix. Not that anything radical is required; sometimes just gradually shifting an offending part left or right will resolve the issue. You can also try using a bit of channel EQ to tweak the tone of a clashing passage.

Once while attempting to EQ a bass track, I accidentally grabbed the channel’s pan pot instead, and in the process moved the bass slightly off center. Suddenly the mono guitar part that I’d been struggling to hear emerged, loud and clear. Now that left an impression! Granted, I don’t make a habit of panning bass, but the point is that you don’t necessarily have to follow conventional mix protocols to achieve decent sound. Though many folks think that mono drums is an anachronism nowadays, if your track seems more focused after putting the kit in the middle, so be it. If on the other hand you need some real room sound to offset a handful of direct-patched keyboard tracks, then wide-panning the drums might be just the thing.

Sometimes when I can’t get a good stereo blend right away, I’ll move everything back to the center, then slowly begin panning the tracks without looking down at the controls—in other words, I just listen until the mix starts to take shape and each instrument is nice and present. Again, nothing ever has to be in a “fixed” position, particularly if what you’re doing sounds good to you at the moment.

Take frequent breaks: As with tracking, your ears can only handle so much volume before losing all objectivity due to fatigue. Therefore, be sure to build lots of break time into your mixing regimen (this is particularly important when using headphones or earbuds for monitoring).

Save it for later: Despite those tall tales of dusk-to-dawn dubbing sessions, you’re likely to have much better luck waiting until the morning to resume mixing when your ears are totally refreshed. Also, try moving to an adjacent room while testing a mix—almost anything will sound great when you’re parked between your studio monitors, but you should get the same vibe when listening from a distance.

Add color: Truly great mixes are often teeming with little bits and pieces that may only make a brief appearance for a bar or two—a few seconds of handclaps or tambourine, a quick burst of piano melody, a colorful guitar fill that never repeats. Try coming up with a few of your own “accents” that can be dropped in at pivotal points throughout the song. Don’t be surprised if one of these random ideas ends up hooking your listeners in the process.

Limit the limiting: Having trouble getting everything to gel? A light-to-moderate amount of compression applied to the master output acts like audio glue, holding the peaks in check while giving the entire mix a radio-friendly sheen. But go easy, lest you lose the natural dynamics of your instruments.

Go back to the classics: Finally, it’s sometimes helpful to take a few nights off and revisit some of your all-time favorite recordings, just so you can hear once again why a particular mix strategy helped make the music so compelling in the first place—and then perhaps applying some of that wisdom to your current work-in-progress.