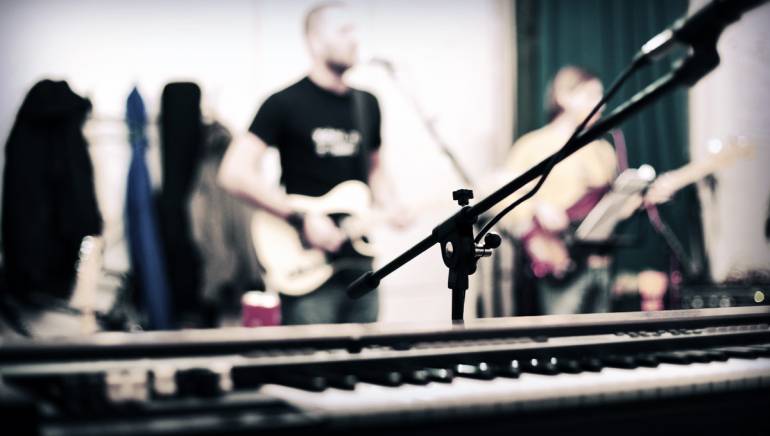 Recently, I was working on a recording session with a local keyboard player, using live piano and drums in the same room for the foundation tracks. Since we had a digital console piano, we could have plugged straight into the mixing board and kept the sounds totally separate; however, since I seldom do things the easy way, I opted to record the piano “live,” and proceeded to place a pair of Sennheiser 421 dynamic microphones underneath the piano, one on each side. When the pianist balked, I told him that we could try it both ways, and if he didn’t like how mine came out we could just go direct.

It only took a few takes for him to realize that maybe there was something to my approach, even if it had nothing to do with the actual sound of the keyboard. Because of the proximity of the two players in the room, the piano microphones were picking up some of the ambient drum sound — vice versa for the overhead drum mics and the piano — which gave the whole recording a nice dynamic live feel. In short, had we recorded the piano direct without using any microphones, the sound would have been completely different.

I’ll be the first to admit that I didn’t even see that coming (I was merely trying for a more “analog”-sounding piano track). However, as a friend once put it, recording is “equal parts good sense and botched science,” and that even in a modern-day context, these kinds of lucky accidents can still occur, providing you have the right ingredients. Which helps explain why it’s often a good idea to encourage leakage — i.e., allowing certain ambient sounds to be partially captured (intentionally or not) by adjacent microphones.

Though it often gets a bad rap, microphone leakage (or “bleed”) has played a key role in some of the world’s most memorable recordings. Half of the attraction of those early rock records from the ’60s is that element of barely controlled mayhem — the sound of loud guitars, bashing percussion and screaming vocalists all battling it out in a three-minute musical slugfest. Back in those days, bands like the Kinks, Beatles, Who, et al., typically recorded in a single room using only a handful of tracks, and the result was a menagerie of sound leakage.

“When something comes on the radio today and has that kind of vibe, you can always hear it,” explains Richard Lush, the Australia-based recording engineer who spent the early part of his career crafting sounds for the Beatles at London’s EMI Abbey Road studios. “That’s what’s happening when you listen to those recordings — drums are all over the vocal mics, limiters are going on and off so as soon as the guitars stop, the drums suddenly come up. When you’ve got that kind of arrangement, it tends to add to the excitement of the whole recording.”

Sometimes, the more people you stuffed into a room, the better the results. At Philadelphia’s soul factory Sigma Sound, home to innumerable Gamble-Huff hits like “Expressway to Your Heart” and “For the Love of Money,” the tracking area was barely 20 feet across, yet on a good day the studio housed upwards of 30 different players.

“As a result, the instruments were always ‘talking’ into each other’s microphones,” recalls Sigma’s founder and chief engineer Joe Tarsia. “But I loved that, because you’d always get something unexpected.” In fact, Tarsia learned to love leakage as a student of recording back in the early ’60s. “I remember one time being at Bell Sound in New York, and they were recording a rhythm section plus horns, vocals and strings, all at the same time. At first the drums had the same lousy sound that I’d been getting, but then the engineer flipped open the strings mic, and wham — suddenly it was just huge-sounding! That left a big impression. So I started doing things like that on purpose.”

Encourage Leakage
While some isolation may be required depending on the size of the room, the volume of the band or the type of music being recorded, don’t go overboard; at the very least, allowing some of the sounds to mingle will typically produce a much tastier mix. Rather than waste time schlepping baffles or “soloing” tracks to hear how one instrument is affecting another, just hang some mics and get to work; if the whole thing sounds good coming through the speakers, nothing else matters.

Generally speaking, dynamic microphones are better at providing good, controllable leakage with the least amount of effort. A Shure SM57 or 58, for example, has a very directional pick-up pattern and is relatively low gain (compared to a “hotter” condenser mic). Put a 57 in front of a guitar amp and you won’t have to worry about the sound of a neighboring amp invading its space, yet the bleed will still be audible enough to give the mix an ambient feel. For that matter, try using dynamic mics as drum overheads (as opposed to the more traditional condenser mono or stereo pair).

Because bass frequencies are typically the toughest to tame, bassists who don’t go direct often find themselves playing in a separate room. Not that it’s mandatory to always have bass in its own space. “I think the bleed of the bass amp into the drum mics can add size, depth and warmth to the track,” says leakage-lover Matt Wallace, producer/engineer for Faith No More, Paul Westerberg, Maroon 5 and others. “The inherent delay between bass mike and drum mike picking up the same signal makes for a really tasty sound.”

Though most of us are inclined to overdub vocals once the rhythm tracks are complete, there’s no harm in attempting some takes with the rest of the band. While a sound baffle may be necessary to prevent excessive bleed, recording the singer live using a Shure SM57 or similar dynamic mic pointed away from adjacent amps and drums — and with a touch of limiter in the signal path — can frequently result in a surprisingly vital vocal.

Some of the benefits of using mic leakage are less obvious. For instance, one of my favorite things is hearing the sound of a drummer’s snares vibrating during a song’s intro. Why? Because it proves that the guitarist and the drummer were playing in the same room! At the same time! Which, in this isolationist era, is something we hardly get to hear enough of. Therefore, the next time you’re laying down band tracks, try leaving the snares on and don’t edit out the rattle. For that matter, resist the temptation to mute stick clicks, buzzing amps during quite passages, or the sound of someone clearing their throat on the other side of the room as heard through the drum overheads. Though it’s subtle, those extraneous noises can add a little human element to an otherwise sterile tracking session.
Songwriter101 exclusive by Dave Simons