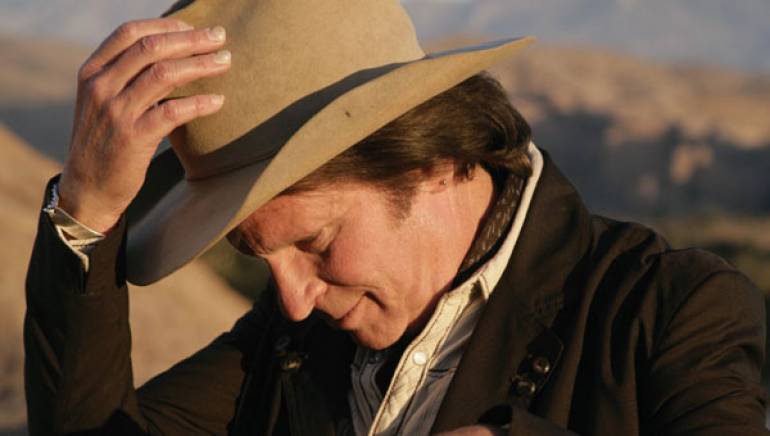 “I think there are four things that make a record great,” says John Fogerty. “There’s the title. There’s the sound of the actual recording. The third thing is the song itself—but many great records have actually been made out of average songs. And the last thing, for me, is that if a record has a great guitar hook, then that’s the very top of the mountain.”

Fogerty knows a thing or two about great records. In his years leading Creedence Clearwater Revival and his subsequent solo career, he has written some of the best-loved songs in rock and roll history—classics including “Proud Mary,” “Bad Moon Rising,” and the ballpark anthem “Centerfield.” For his achievements, Fogerty is being honored as a BMI Icon at the 58th annual Pop Awards, which are being held on Tuesday, May 18 at the Beverly Wilshire Hotel in Los Angeles. The award places him on the company of such previous honorees as Paul Simon, Brian Wilson, and James Brown.

The run that Fogerty and CCR enjoyed— between 1969 and 1971, the band scored nine Top Ten hits—was truly one of music’s greatest hot streaks. Speaking from a tour stop in Florida, the singer recalls that during that time, his focus on songwriting became so intense that it took over the rest of his life.

“I would have ideas all day,” he says, “and then I’d start at 11 at night and work until 4 o’clock, with coffee and cigarettes, getting those ideas down on paper. Of course, the human mind only has the capacity to go in one direction at a time, so I was terrible as a businessman, or even at having a conversation. I just pushed everything else out of my mind.”

Following CCR’s break-up, and during subsequent legal struggles with his label and his former bandmates, Fogerty went through lengthy periods in which he wasn’t recording (ten years between the 1975 John Fogerty album and his solo breakthrough Centerfield, and then another eleven years between 1986’s Eye of the Zombie and Blue Moon Swamp in 1997). He grew to learn that songwriting is a muscle that needs to be flexed or it loses its strength.

“The more you do it, the better you get,” he says. “But if you haven’t been writing for a period of time, there are days or even weeks where what you’re doing is just dreadful. Everything is out of alignment in your head, you just can’t find that right word.”

Of course, Fogerty also acknowledges that he hasn’t always made things easy for himself. “I set these challenges and make rules for myself,” he says. “Don Henley wrote (in ‘Hotel California’) about being ‘prisoners of your own device,’ and it’s a really intriguing line—I think we all have some aspect of that.

“On Centerfield, I played all the instruments myself, and there were many years where my one-man band just sounded terrible. About a year before the album was made, it finally started to sound pretty good. At that point, the writing got better, and then parts of my imagination that had been closed off just opened up.”

One of the reasons that such Fogerty masterpieces as “Who’ll Stop the Rain” and “Fortunate Son” remain so compelling forty years after they were written is that they captured the mood and feel of a time without relying on details that could seem dated. More than any other writer, he expressed the chaos and uncertainty of the Vietnam era in ways that still resonate for listeners today.

“During that period, it seemed better if a song was more universal, and not specifically between myself and somebody named Fred,” he says. “It just felt like a stronger bit of storytelling. As I got older, I started to like songs like ‘Frankie and Johnny’ and ‘Stagger Lee’ that tell a real story about specific people doing specific things. That’s cool, too, but in Creedence, I was putting a broader stroke on things.”

Like many writers, Fogerty notes that his best songs come to him as if they’re broadcasting on “some ethereal radio station”—and says the most important thing is to pay attention when that feeling starts. “On the song ‘Déjà Vu (All Over Again),’ I heard a sonic vision and I heard the first line,” he says. “I kind of let it go, but it grabbed me again, so I grabbed a guitar and the song just came out of me. Until I got to the chorus, I didn’t even know what it was about.

“I was really going to lose that song, but it played back to me—and it said, ‘This is far better than whatever it is you think you’re doing right now.’”

Alan Light is the Director of Programming for the public television concert series “Live from the Artists Den,” and a frequent contributor to the New York Times. He is the former Editor-in-Chief of Spin and Vibe magazines and a former Senior Writer for Rolling Stone.