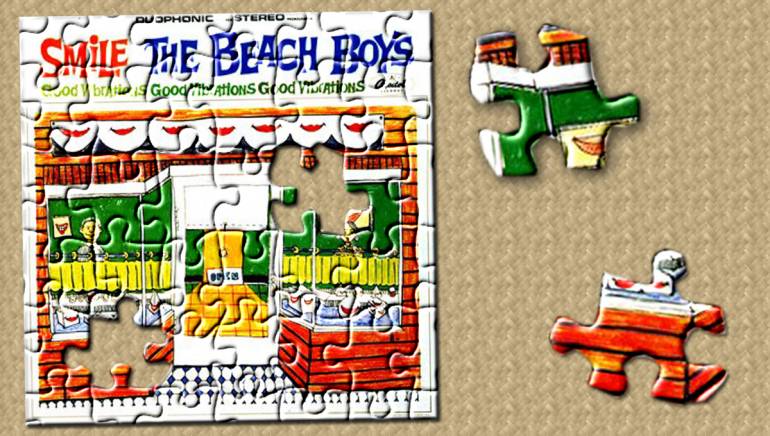 Much has been made of the long-awaited official release of the Beach Boys’ epic SMiLE album, which, despite being abandoned back in mid-1967, represents the creative high-water mark for its composer, BB leader and pop wunderkind Brian Wilson. By 1966, Wilson, using the technology available at the time, was hard at work developing an entirely different approach to crafting music in the studio. Rather than cutting backing tracks live from start to finish (as had been his usual custom), Wilson had begun recording song ideas in short bursts (or “feels” as he sometimes called them), subsequently stitching together the various parts to form a seamless whole. “Good Vibrations,” comprising numerous bits and pieces using no less than five different recording studios, proved that Wilson was onto something good; by the time the single reached the top of the charts that fall, Wilson had already completed half an album’s worth of new material based on his “modular” method, which he initially titled Dumb Angel, then later SMiLE.

Though the enormity of the project would ultimately overwhelm an increasingly fragile Wilson, the arrival of the bountiful SMiLE Sessions multimedia box last November — featuring no less than five CDs of the masterpiece in the making — reveals that Wilson was indeed operating on a creative level well above his most celebrated peers (the Beatles included). For us studio mortals lucky enough to own the kind of basic sound-manipulation tools that would have made Wilson’s job so much easier back then, SMiLE demonstrates the infinite possibilities of crafting whole songs using musical modules, rather than in a single gulp.

For those who lack the time or discipline to sit down and write a fully formed song in the traditional sense, modular recording represents the perfect opportunity to recycle discarded bits of ideas that have fallen by the wayside. Hence the importance of saving all of your musical fragments in a dedicated folder on your hard drive; even things that may sound trivial today could play an important role when attempting to assemble a song from spare parts later on.

There are a number of easy-to-use (and even free-of-charge) utilities that allow you to weave together your various components without making the stitch marks obvious to the listener. One popular program is Audacity (http://audacity.sourceforge.net), which includes a full complement of editing features like copy and paste, clip trimming, pitch and tempo adjustment, peak leveling and equalization. Because Audacity allows you to work with multiple waveforms on a single template, you can mix and match fragments at will — extracting a portion of the bridge for use as an intro, swapping the intro for the outro, shuffling the order of the various pieces, and so forth. Rather than repeating a verse or chorus multiple times, using your editing tools you can simply copy and paste the initial take throughout the song (as Wilson himself did to perfection in “Good Vibrations” and throughout the SMiLE tracking sessions).

You can utilize the modular approach during a live tracking-session as well. Even in the good old days of analog, bands would often come up with a framework for a song by recording long jams in the studio and then cobbling together any “keeper” fragments after the fact. Digital is tailor-made for such work — just hit record and start playing; with a little judicious editing, you can isolate, cut, paste and loop any promising ideas into the makings of an actual song.

You can also use the same methodology to construct a finished master by choosing from select portions of various “trial” mixes. Let’s say you’ve made four or five different mix attempts of your multitracked song, and while listening back you realize that you like the way the guitar jumps out in the second mix, but you think the vocal sounds better on the third mix, while the drums are less intrusive on the fourth, etc. Assuming all the mixes are relatively uniform (i.e., levels and tempos are consistent throughout), import the different mix files into your project using Audacity or other editing utility. With each waveform on the screen, locate the beginning and end of each designated passage, highlight the various sections and then copy each onto a new “master” waveform. Carefully merge the various pieces one by one, previewing each edit along the way; if any of the welds are obvious (i.e., you cut a section a bit too long), just hit “undo” and try again until you get it right. Once complete, save the “master” mix to your hard drive and then burn to CD.